There are a lot of interesting attractions and museums along the Oregon and Washington coasts, but in my opinion, the best of them all is the Columbia River Maritime Museum in Astoria, Oregon.


The museum specializes in collecting and exhibiting maritime artifacts from the Columbia River and the Pacific Northwest. The Museum, which opened in 1962, has an amazing collection of more than 30,000 objects, 20,000 photographs, and a 10,000-volume research library, all telling the story of the brave men and women who have made their living on the treacherous shore of the Pacific Ocean and along the broad and wild Columbia River. 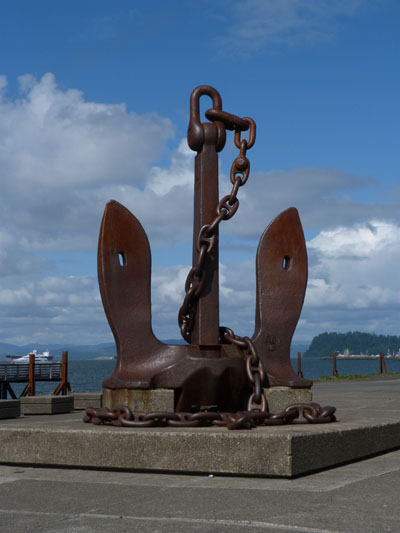 From the first Indians who fished these waters in primitive cedar canoes to the explorers, commercial fishermen, and deepwater sailors who literally cast their fates upon the waters, as well as the brave Coastguardsmen who put their lives on the line every day of the year to come to the rescue when things go bad, their experiences are all chronicled at the museum.

The museum’s six galleries, Great Hall, and the Lightship Columbia interpret the Pacific Northwest’s rich maritime history. Visitors of all ages can experience what it’s like to pilot a tugboat, participate in a Coast Guard rescue on the Columbia River Bar, and live in Astoria during the height of the salmon fishing industry. Huge windows along the north wall look out on the Columbia River, providing a dynamic backdrop for the museum’s exhibits. 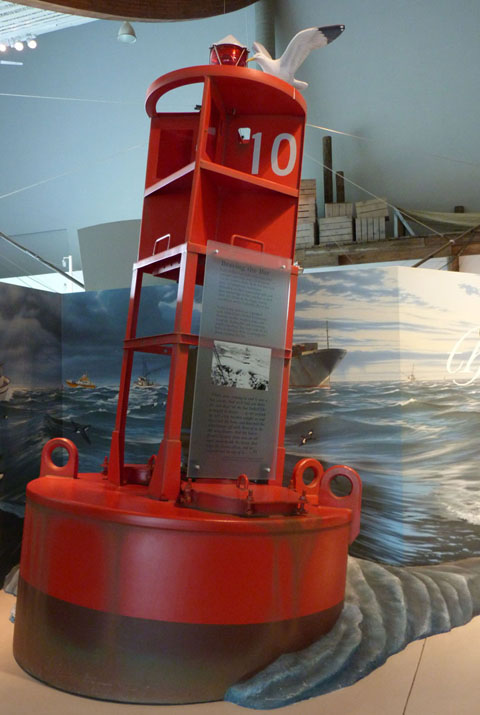 The stretch of coastline from Tillamook Bay in Oregon, north to Washington State’s Long Beach Peninsula, has been called the Graveyard of the Pacific due to the almost 2,000 vessels and hundreds of lives that have been lost to the rocks and towering waves that can smash even the largest ship to pieces in moments. But when the waters are calm and Lady Luck smiles on them, these same waters have yielded fortunes to those who are willing to work hard and risk everything in the hope of a big payoff.

Displays at the museum cover the history of the Columbia River, once a wild and treacherous waterway that has been tamed with a series of dams, and of the offshore waters of the Pacific. And separating the two is the notorious Columbia River Bar, where the strong current of the river meets the wild waves of the ocean head on.

Experienced mariners will tell you that there is no more dangerous or deadly piece of water in the world. Winter storms at the bar create giant waves, some over forty feet tall, than can toss even the largest modern cargo ships around like bathtub toys.

Skilled bar pilots are needed to safely guide ships across the bar, and these brave men put their lives on the line every day to make sure commercial vessels safely get across the bar and into the Columbia River, and back out to sea again when they leave port. Transported to waiting ships aboard specialized 73 foot long speedboats (below), the bar pilots then climb 20 to 30 feet, and sometimes as much as 50 feet up a rope ladder hanging from the side of the ship. Pilots try to grab the ladder while the pilot boat is on the crest of a wave, so that the boat falls away from the pilot on the ladder. This is the most dangerous part of their job, and one false move or freak wave can throw a pilot in the turbulent water below, or crush them between the ship and the pilot boat. The museum has a detailed exhibit on the vital job the bar pilots do. 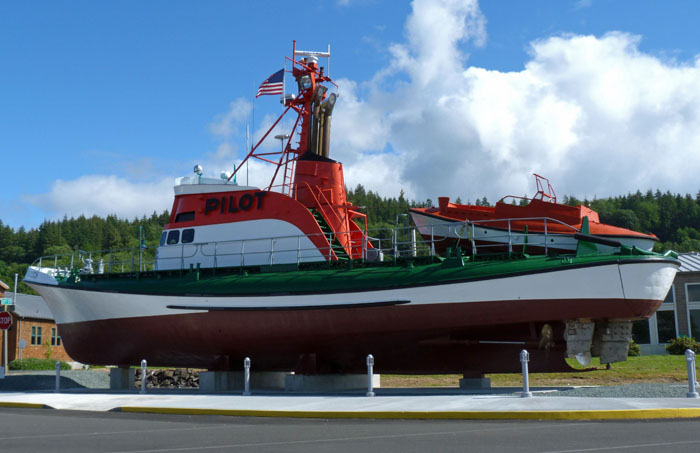 The museum is an immense facility, housing several full size fishing boats, including open fishing boats like this (top), and a sailing gillnetter (bottom), once a common fishing vessel in this region, but now the only one of its kind left in the world. 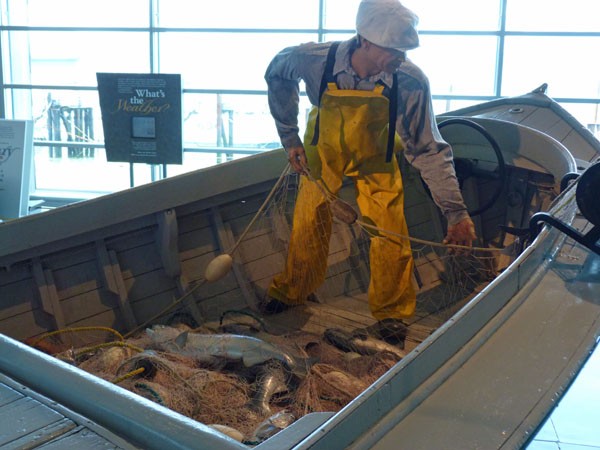 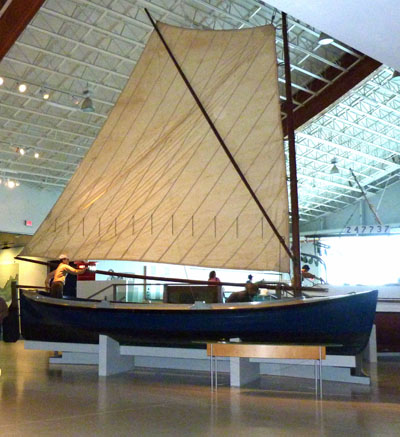 Nearby is the Darle, a powered troller of the type that replaced the sailboats that came before. 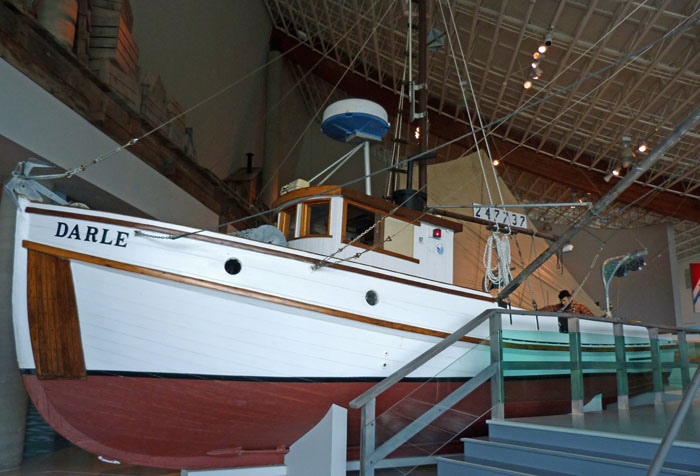 Other boats on display inside the museum include small Coast Guard rescue craft and the CG44300, a Coast Guard lifesaving boat that served gallantly on the Pacific coast for 34 years. In her long and distinguished career the boat was rolled several times, and during one storm, 30 foot waves tumbled her end over end, but each time her design allowed the boat to right herself, and she survived. 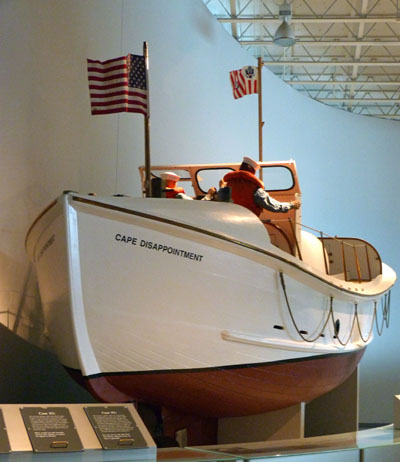 During one mishap, in Yaquina Bay, a 10,000 ton freighter ran over the CG44300 while she was tied up at her dock. Everyone thought that was the end of the hardworking boat, but once the debris was cleared away, the CG44300 popped back to the surface, ready to go back to work, after minimal repairs! 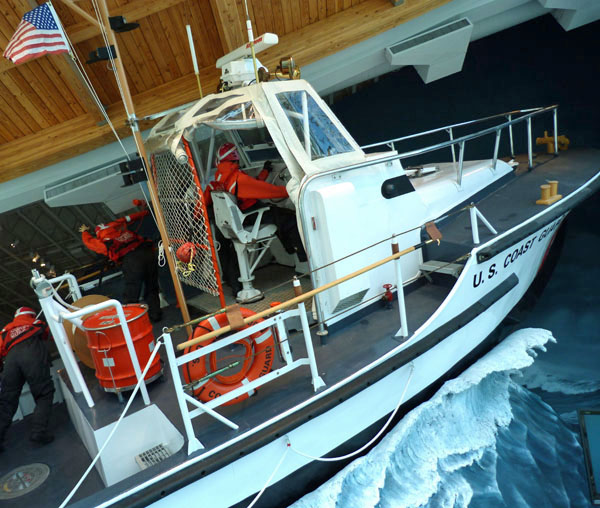 Other displays at the museum include a beautiful collection of nautical artwork and model ships, scrimshaw, a whaling harpoon gun, and equipment used on the boats and ships that worked the Columbia. An 1841 U.S. Navy officer’s sword and scabbard on display was found buried on Clatsop Spit, and is believed to be from the shipwrecked USS Shark, which foundered on the Columbia River Bar in 1846. The oldest items in the museum’s collection are a wooden block and a chunk of beeswax from a 17th century Manila galleon that wrecked on Nehalem Spit. 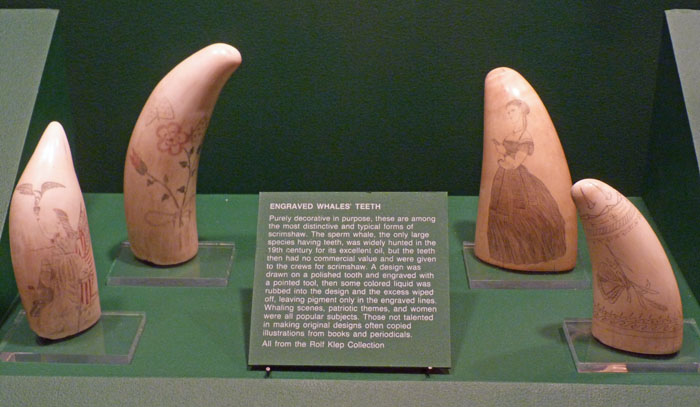 The rarest item at the museum is a Northwest Company fur trade token, which was made in Birmingham, England by John Walker & Co. for fur traders. The tokens had a wide circulation in the trade network of Canada and the Columbia River Valley in Oregon. The copper and brass token is dated 1820, which is the last year they were made before the company was absorbed by the Hudson Bay Company.

Admission to the museum also includes a self-guided tour of the WLV-604 Lightship Columbia, a floating lighthouse that was stationed six miles off the mouth of the Columbia River for nearly 30 years, and is now berthed at the museum. Visitors are allowed to explore the lightship, from the crews’ quarters below decks to the bridge on top, including the officers’ quarters, mess deck, radio room, and galley. Designated a National Historic Landmark vessel, the Lightship Columbia was the last active-duty floating lighthouse on the West Coast when it was retired. 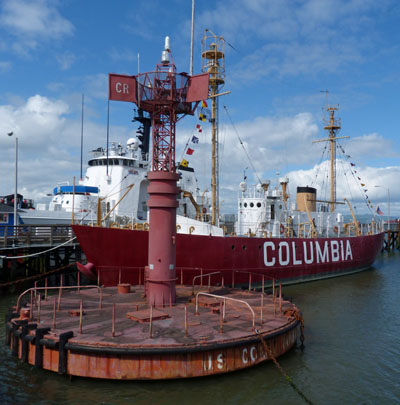 Serving as floating lighthouses, lightships were anchored over treacherous reefs, or marked narrow approaches to channels, rivers, or harbor entrances. Lightships not only provided a beacon where a traditional lighthouse could not stand, but they could also be stationed offshore, where a beam from a coastal lighthouse would not reach.

The first U.S. lightship provided aid to mariners entering Chesapeake Bay, and was stationed off Willoughby Spit, Virginia, in 1820. The last serving lightship, Nantucket WLV-613, was retired in 1983.


While in service the Columbia had a crew of seventeen, with ten men on duty at all times. The crew spent their off-duty time fishing, reading, playing cards, resting and eating. The Columbia tour is not recommended for individuals with mobility challenges, due to the lightship’s steep access ladders and elevated thresholds.

Even if you are a committed landlubber such as me, you will find the Columbia River Maritime Museum fascinating. We spent hours there during our visit, and could have stayed even longer if it wasn’t closing time.

The museum is located at 1792 Marine Drive, on Astoria’s waterfront, in the shadow of the Astoria-Megler Bridge over the Columbia River. The museum is open daily from 9:30 a.m. to 5:00 p.m. It is closed Thanksgiving Day and Christmas Day.

If the parking lot on the east side is not too busy, there is room for an RV to park, but if the museum is having a busy day, a larger RV might have difficulty. For more information on the museum, call (503) 325-2323 or visit their website at http://crmm.org/index.html

Thought For The Day – I will never be over the hill. I’m too tired to climb it.