Just east of Raymond, Washington, on Highway 6, a historical marker stands near the grave of Willie Keil. Over the years untold numbers of travelers have stopped to read the sign, but not many of them know the story behind the marker – the story of the dead man who led a wagon train of settlers through Indian Territory along the Oregon Trail to the coast of what would one day become Washington state. 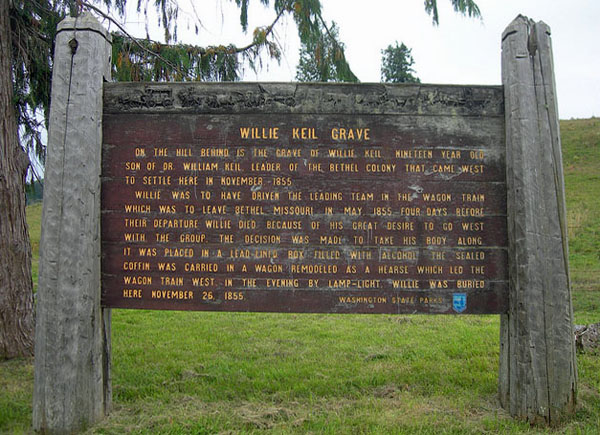 In 1855, Willie Keil was a 19 year old man, the oldest son of William Keil Sr., a leader of a group of German Rappites and one of the founders of Bethel, Missouri, where they settled in 1844. The Rappites were a religious sect named after their founder, George Rapp, who lived a communal lifestyle where everyone worked for the good of the colony.


Keil’s colony of Rappites, about 200 strong, broke away from the main sect, moving west. They prospered in Missouri, building sawmills, shops, gristmills, and a distillery where they brewed their own brand of liquor, Golden Rule Whiskey. The Bethel colony lived very well, selling what goods they could not consume themselves to outsiders, including cloth, shoes, and whiskey. Within the colony, no money ever changed hands – everyone took what they needed for their families with no questions asked and apparently no one taking advantage of the system.

After about eleven years, the Bethel, Missouri area became too crowded for the colony and William Keil Sr. sent an advance party of nine men west to scout the frontier for a new site for the commune. The scouts returned in the Spring of 1855, having discovered land in the Willapa Valley, where they cleared some land and began building cabins.

As plans progressed for the move west, young Willie Keil was selected to lead the wagon train, quite an honor for one so young. But tragedy struck, and Willie died after a short illness. His father was grief-stricken but he remembered how much his son had wanted to lead the wagon train. William Keil Sr. ordered a special lead lined casket made, where Willie’s body was lain. Then the casket was filled with Golden Rule Whiskey and sealed. The wagon containing Willie’s remains led the wagon train as they headed west, the emigrants following along behind saying prayers and singing hymns.

Tension between Whites and Indians were high in 1855 as more and more settlers crossed the Plains headed west. Wagon trains were attacked, settlers killed, their wagons looted and burned. Neither man, woman, nor child was safe from the Indians’ vengeance at the trespassers. Many wagon trains turned back rather than face the dangers along the trail.

But word of the strange wagon train led by a dead man preceded the Rappites. The superstitious Indians wouldn’t attack the settlers, though a few visited the wagon train to gawk at the casket. The Keil party was one of a very few wagon trains that crossed the Sioux lands unharmed that violent summer.

Finally after many months on the trail, the settlers reached their destination near Willapa Bay. During the night of December 26, 1855, in a weird candle lit ceremony that still goes without explanation, and many would consider pagan, young Willie Keil was finally laid to rest on a hilltop. His long journey was over.


But not so for the rest of William Keil Sr’s. party. Unhappy with the gloomy sky overhead and the long rainy winter along the coast, Keil led them away, finally settling in the Willamette Valley, where they founded the town of Aurora. Just as they had in Missouri, the colony prospered. The elder Keil led the commune until his own death in 1877.

Today Willie Keil’s grave sits on its lonely hilltop, and occasionally a passerby will stop to read the sign erected at the base of the hill, never knowing the strange story of how this young man, though departed from life, helped lead his people safely to their new lands.

Every day more orders are coming in from readers taking us up on our special offer of digital back issues of the Gypsy Journal for the years 2003 through 2017. They are in PDF format on a USB thumb drive and will provide you with weeks of great reading about places to visit from coast to coast and our adventures as fulltime RVers. The normal cost of the back issue collection is $75, but we are running a special through the end of April for just $65, which includes shipping. Don’t miss out on this great deal. If interested, you can log onto www.paypal.com and make payment to editor@gypsyjournal.net. Be sure to include your mailing address for fast delivery.

A lot of you do your online shopping by clicking this Amazon link. We appreciate that, because when you purchase an item on Amazon any time of the year from one of our links, we earn a small commission, which helps us offset the cost of publishing the blog.

Congratulations David Schumaker, winner of our drawing for an audiobook of Chesapeake 1880 by my friend Ken Rossignol, a tale of life in the Chesapeake Bay region as the industrial revolution changed the world forever. We had 58 entries this time around. Stay tuned, a new contest starts soon.

Thought For The Day – I don’t need anger anagement, you people just need to stop making me mad!

One Response to “The Haunted Wagon Train”