We love old ships and have toured many of them in our travels around the country; from aircraft carriers that exercised America’s power on the world’s oceans, to sturdy freighters that carried cargo on the often wild and treacherous Great Lakes, and even wooden sailing ships from the days when navigation was done by the moon and stars.

On a trip to Muskegon, Michigan, we got to tour a grand old ship that earned the title Queen Of The Great Lakes. 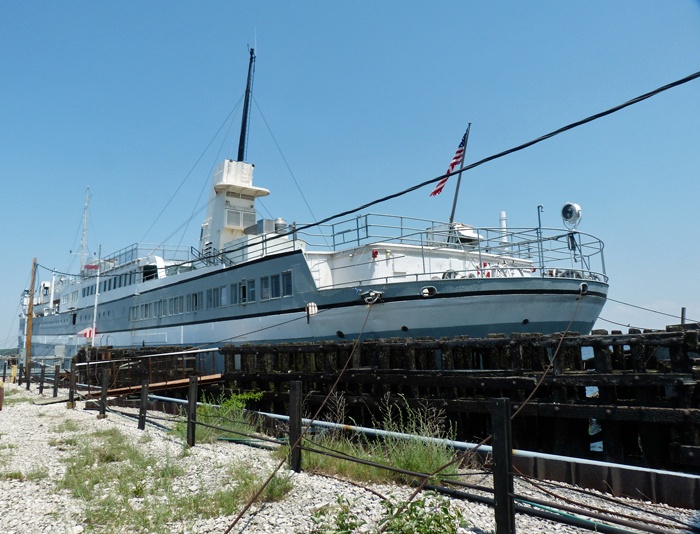 The SS Milwaukee Clipper had a long history of service on the Great Lakes, traveling on all of them except Lake Ontario in her 65+ years on the water.

Built by the American Shipbuilding Company in Cleveland, Ohio, she was launched on December 22, 1904, and christened the SS Juanita. At 361 feet in length, 45 feet in beam, with a gross tonnage of 4,333 tons, the Juanita carried 350 passengers.

She joined her sister ships, SS Tionesta and SS Octorara in the Anchor Line, the Great Lakes marine division of the Pennsylvania Railroad. For the first eleven years of her life she carried passengers and freight between Buffalo, New York and Duluth, Minnesota.


In 1915, the government determined that railroads could no longer operate steamships, as part of legislation to eliminate monopolies. The Pennsylvania Railroad sold its fleet to the newly formed Great Lakes Transit Corporation. For the next twenty years, the Juanita continued carrying passengers and cargo on the Great Lakes.

After the closing of the Chicago World’s Fair in 1937, the Juanita sat idle in Buffalo, New York until being sold to new owners in 1940. Then the ship received a complete overhaul and modernization. Her boilers were upgraded from coal to run on fuel oil and the old cabins and wooden superstructure were removed and replaced with steel to meet new maritime fire safety standards. The newly remodeled ship featured air conditioned staterooms, a children’s playroom, a movie theater, dance floor with a live band, a soda fountain, bar, cafeteria, lounges, and sports deck.

This was the golden age of steamship travel, and Great Lakes passenger ships represented the utmost in first class accommodations. With her highly varnished mahogany woodwork, wicker furniture, Pullman-style sleeping compartments, staterooms, and chefs turning out cuisine worthy of the finest hotel, passengers traveled in style.

Renamed the Milwaukee Clipper, she made her maiden voyage from Milwaukee to Muskegon on June 3, 1941. For the next 29 years, she sailed a regular route between Muskegon, Michigan and Milwaukee, Wisconsin. Nicknamed the Queen of the Great Lakes, she carried 900 passengers and 120 automobiles. She had a crew of over 100, more than half of them assigned to take care of the ship’s passengers’ needs.

On weekdays the ship made two round trips that took seven hours each way, with three trips on weekends. In the 1950s, the one way fare was $3.33, and $8 extra for an automobile. Passengers who wanted a little more pampering could pay 75 cents extra to travel in the forward Club Lounge and use the forward deck. The busy passenger season was between May and September, but the ship sailed year round, carrying new automobiles for manufacturers in the off season.

From 1964 to 1970, the ship operated during the summers only, on a reduced schedule.

In 1977, the ship was purchased by a Chicago company that renamed her the SS Clipper and planned to use her on excursion runs from Chicago to Milwaukee. Unable to gain a new certification for service, she was berthed at Chicago’s Navy Pier and used as a floating museum. She remained there until 1990, when she was moved to Hammond, Indiana where she served as the centerpiece for their large new marina. On December 2, 1997, once again renamed the Milwaukee Clipper, the veteran ship returned to her old homeport in Muskegon, Michigan, where she remains today, as a floating museum.


Visitors can take a guided tour of the pilothouse, some staterooms, crew quarters, dance floor,  and movie theater. There are also displays of memorabilia from her days as both the Juanita and the Clipper, which include memory books, photographs, brochures, dishes and other items of interest. 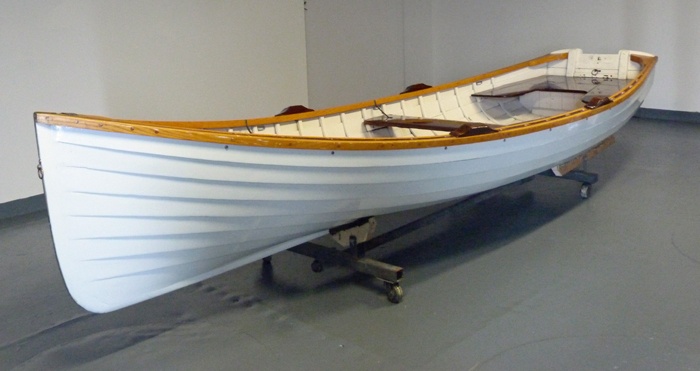 The pilothouse, with its wooden wheel, compasses, and other navigation equipment, was where the ship’s officers operated her when crossing the Great Lakes. 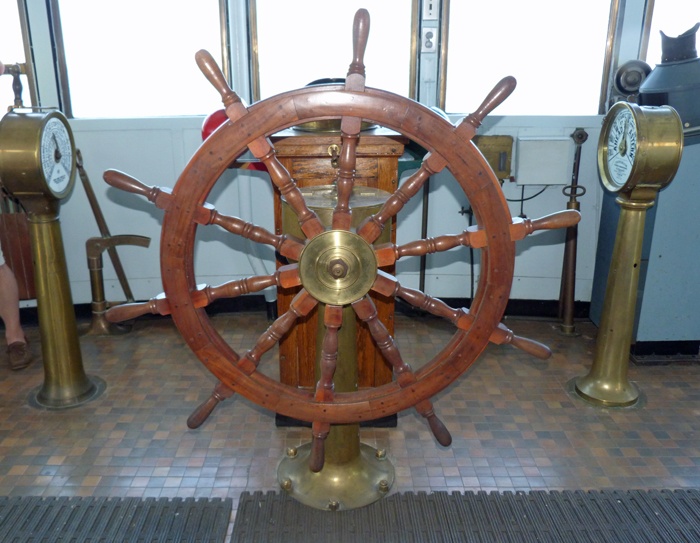 During our visit, T. J. Parker, president of the SS Milwaukee Clipper Preservation Group, gave us a private tour of the beautiful old ship, which has been designated a National Historic Landmark. We saw everything from the below decks hold that carried automobiles across Lake Michigan at one time, to the lounges, crews’ quarters, and pilothouse.

Our tour started on the Main Deck, which is really the uppermost car deck, where a small museum and gift shop are located. A number of beautifully crafted model ships were on display, along with photos of the actual ships and information on their history.

Passengers could relax in the Main Lounge, where refreshments were available, and lots of windows offered great views of the lake. The Sports Deck held a bar and a dance floor where top name bands performed and many famous people partied over the years. 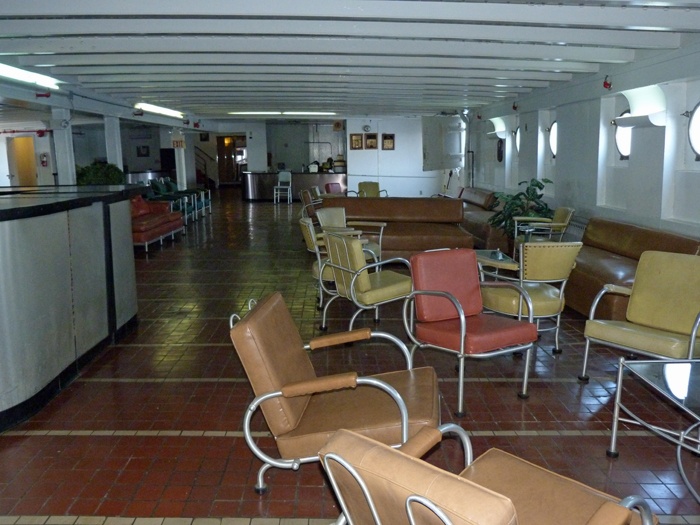 Forward of the staterooms is the Club Lounge, a semi-exclusive bar that was more private than the Main Lounge. There is a door to the open bow area if you like a stiff breeze! To the rear of this bar area is the Pullman-style sleeping area. During the day, they converted into booths for relaxing with snacks. 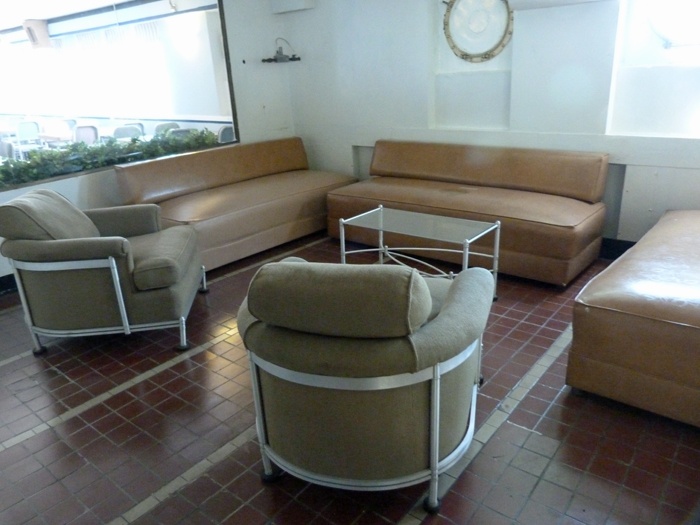 There is a separate Children’s Play Room and Theatre. Volunteers restoring the ship discovered wonderful old paintings of children’s book characters on the wall. No one even knew they were there, under years of added layers of paint and wallpaper. The restorations of these original paintings is a very delicate process. 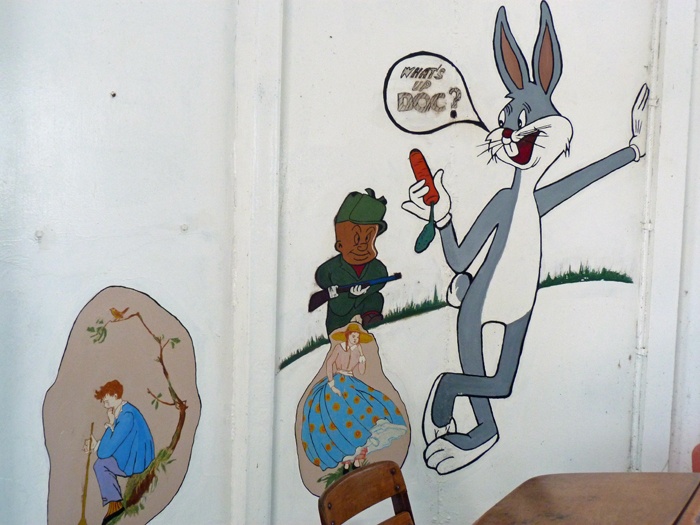 This smokestack is for aesthetics only, it never was part of the ship’s operation. During crossings, bands set up on top of the stack to play music for the passengers. 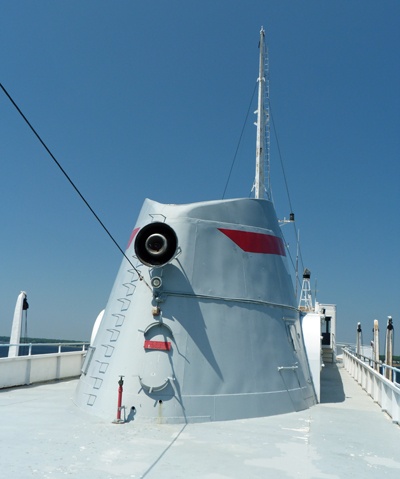 From stem to stern, and top to bottom, the Milwaukee Clipper is a grand old ship, and taking a tour of her should be a top priority the next time you find yourself in western Michigan.

The ship is docked at 2098 Lakeshore Drive in Muskegon, and tours are available on Saturdays and Sundays from 1 to 5 p.m., Memorial Day weekend through Labor Day. Because a tour of the ship involves climbing several sets of stairs and steep steps, access is not available for those who are handicapped. For more information, visit the ship’s website at http://www.milwaukeeclipper.com/

You still have a few days left to take advantage of our special offer of digital back issues of the Gypsy Journal for the years 2003 through 2017. They are in PDF format on a USB thumb drive and will provide you with weeks of great reading about places to visit from coast to coast and our adventures as fulltime RVers. The normal cost of the back issue collection is $75, but we are running a special through the end of April for just $65, which includes shipping. Don’t miss out on this great deal. If interested, you can log onto www.paypal.com and make payment to editor@gypsyjournal.net. Be sure to include your mailing address for fast delivery.

Be sure to enter our latest Free Drawing. This week’s prize is an audiobook of Hands of Onyx, book 2 in the Sav’ine series by Stacy Bender. It’s a story about cybernetic soldiers escorting a long haul space freighter to the outer rim planets, dealing with saboteurs who are trying to stop them and a crew that includes a half-blind medic, an explosives expert who is a sociopath, and an interrogator suffering from dementia. What could possibly go wrong? To enter, all you have to do is click on this Free Drawing link or the tab at the top of this page and enter your name in the comments section at the bottom of that page (not this one). Only one entry per person per drawing please, and you must enter with your real name. To prevent spam or multiple entries, the names of cartoon or movie characters are not allowed. The winner will be drawn Sunday evening. 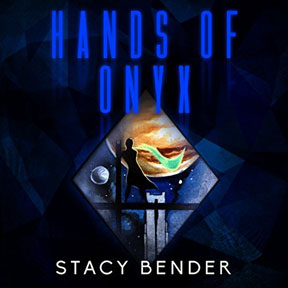 Thought For The Day – What’s done in the dark will come to the light.

3 Responses to “Queen Of The Great Lakes”