Nick's Blog » We Got Floored

When we bought our house, one of the goals we set for ourselves was to replace the carpeting in the living room, hallway, master bedroom, guest bedroom, and the third bedroom, which serves as Terry’s sewing room. Back in the day it was nice carpeting, but years of kids, grandkids, dogs, and use had left it dingy and stained in many places. 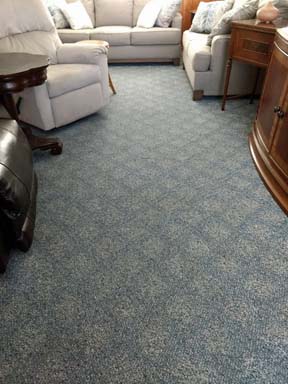 The kitchen, another hallway, and the guest bathroom had some kind of vinyl flooring that looked okay at first glance, but the people we bought the house from weren’t nearly as energetic at cleaning as Miss Terry is. For years they basically swept it up a bit and put on a new coat of wax now and then. The result was a layer of nasty wax that she couldn’t scrape off or do a thing with. So a while back we decided it was time to make some changes. 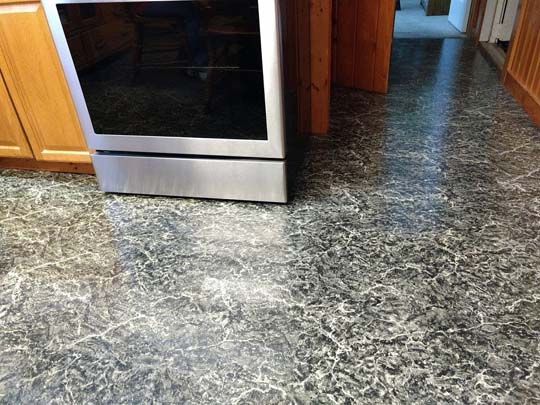 We always prefer to do business with small local companies whenever we can, and we found a family owned operation that had some good reviews and went to see them. They were very friendly and allowed us to look at a lot of samples, and even bring some home to see how they looked in the house. We settled on a nice carpet that has a very slight blued gray tint to it, and laminate flooring for the kitchen that looks like granite.


We paid a deposit, they ordered the product, and we were told they would do the installation Tuesday of this week. The owner of the company said his guys would be here at 8:30 AM Tuesday morning, and should be able to knock everything out by the end of the day. He said if they ran into some snag, they might have to come back Wednesday morning for a couple of hours to finish up.

Now all of you know that we are not early birds by any means, but we dragged ourselves out of bed a little after 7 AM on Tuesday morning, waiting for the installation crew to show up. Somewhere around 9 o’clock I got a call saying that they had been hung up on the previous day’s job and had a little bit of work to finish there, but they would be at our place as soon as possible. Okay fine, things like that happen.

The crew got here about 12:30, removed all the furniture from the living room, laid the carpet there, and left at 2:30, saying they would be back early Wednesday morning. Huh? Now, there was a slight problem in the guest bedroom and a small section of subfloor about 2×2 feet needed to be replaced, which they said would take an hour or so. Okay, so why are you leaving at 2:30? What about the other rooms? They assured us they would be back bright and early the next morning and knock everything out. Yeah, right.

So we were up early again Wednesday, and they showed up right on time, replaced that small section of subfloor, then finished laying the rest of the carpet. While a couple of guys were doing that, two more were laying the laminate. That’s kind of tedious and there was a lot of cutting and notching for corners and things to make everything fit and look good, and it was pretty obvious they were not going to get done that day. And they didn’t. They finished up about 4 o’clock again, and said someone would be here at 8 o’clock yesterday morning and it wouldn’t take them any time at all to finish up, because all of the hard part was already done. Uh huh. You can see this coming, right?


Bleary-eyed, we greeted them at 8 AM, they set to work and everything seemed to be going real well until sometime around noon when I heard one of them say “uh-oh.” That was never a good sound to hear when I was raising kids, and it still isn’t. It seems somebody did not order enough laminate flooring, and they ran out with about a 2′ x 10′ section left to go. They called the boss, and he called me back and said he would order it and have it in Monday, and give me a call so they could come out to finish up. I’m not holding my breath. But I am holding my check until the job is completely finished.

I will say that what we’ve got so far looks very good. Here is the living room with the new carpet in the top photo, and the laminate in the kitchen in the bottom picture. 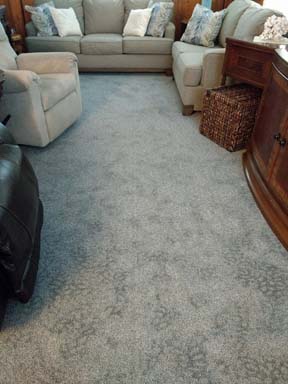 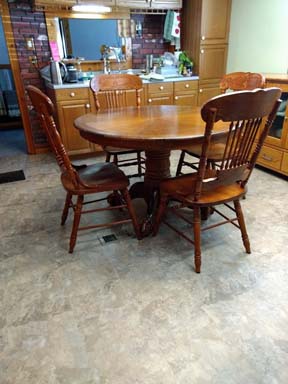 I told Terry that at least we could sleep in a little bit tomorrow, since nobody would be here to work. Sometimes I think the universe just chuckles when I say things like that, because it wasn’t half an hour later that the boss man from the carpet company called to tell me that his crew had left some power tools they desperately needed in our garage, and would be by this morning at 8:30 sharp to pick them up. Hey, stop laughing at me, it’s not funny!

Be sure to enter our latest Free Drawing. This week’s prize is an audiobook of Going Home With A Cat And A Ghost by RVing author Judy Howard. It’s the story of a woman liberated enough to travel the country in her RV, yet still imprisoned by tragic events from her past. To enter, all you have to do is click on this Free Drawing link or the tab at the top of this page and enter your name (first and last) in the comments section at the bottom of that page (not this one). Only one entry per person per drawing please, and you must enter with your real name. To prevent spam or multiple entries, the names of cartoon or movie characters are not allowed. The winner will be drawn Sunday evening. 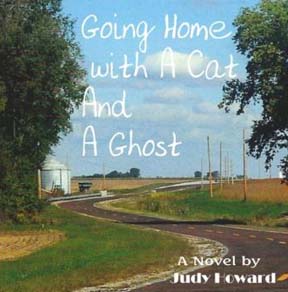 Thought For The Day – The only disability in life is a bad attitude.

3 Responses to “We Got Floored”