Nick's Blog » And The Winner Is…

In a blog post a few weeks ago titled What To Do? What To Do?, I said I was trying to decide whether to buy my wife’s husband a red Mustang fastback or a pontoon boat for Valentine’s Day. Apparently not everybody gets my sense of humor or could read between the lines, because three different blog readers emailed or sent me messages of concern asking if Terry and I had split up and she found someone new, or if I was talking about an ex-wife’s husband. Think about it, it’ll come to you eventually.

I gave it a lot of thought, I test drove a really sharp Mustang, and then I took a pontoon boat for a ride. And the winter was this 2017 Bennington SSX 20 foot fishing boat. It is set up exactly like I wanted in a  pontoon  fishing boat, with two fishing seats in front, two more in the rear, an L-shaped lounge couch, live wells front and rear, a padded sun lounger that opens up to provide a pop-up changing room with a potty in it, a Garmin echoMAP™ CHIRP 54cv chart plotter with transducer, a 70 horsepower Yamaha 4 stroke outboard motor, a Bimini top, full cover, and a trailer. 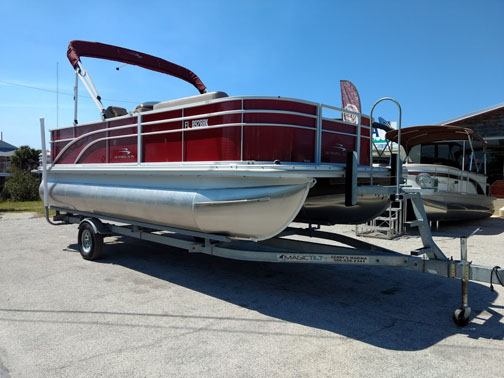 I actually bought it about a month ago, but then I started having all that back pain and could hardly walk, so it’s been sitting at the dealer’s lot until yesterday when I was feeling better and picked it up after a lengthy on the water test ride to familiarize us with all of its features and controls. Let the good times begin! 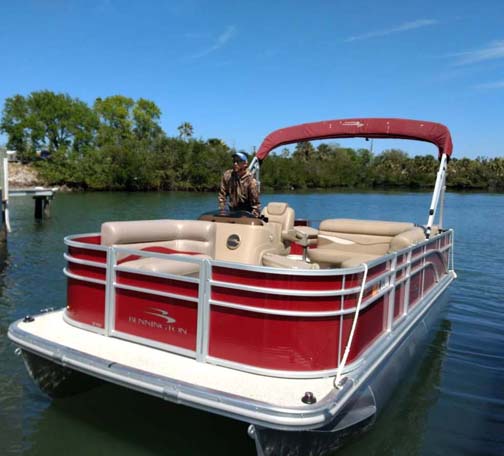 Some of you may remember that the big hangup to getting a pontoon boat was that on a conventional trailer it’s several inches too high to fit through our garage door. The garage is huge, so once we’re in the door, it’s okay. The answer to that is this. It’s called a scissor trailer, and here it is in the high position to transport a boat. 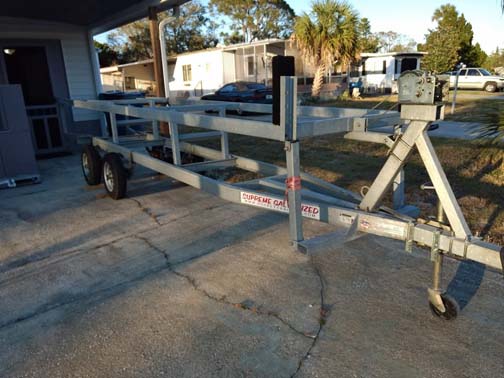 But by turning a crank you can lower it down to this position, and actually set a boat on the ground and drive out from under it. A while back I had the dealer bring out the same model boat on a scissor trailer, we cranked it down almost to ground-level, and it went in the garage just fine. These trailers really are not great for towing on the highway because they are a bit unstable at higher speeds, but since we are only 800 yards from our private boat launch, it’s not a problem. 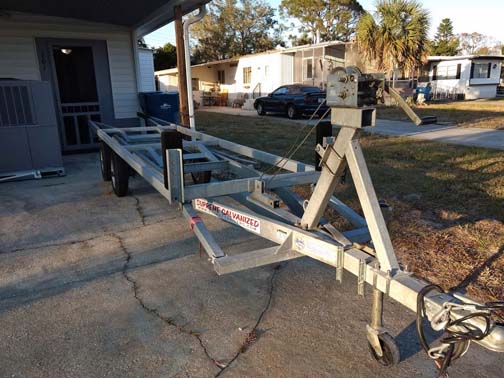 So I actually have two trailers, the regular Magic Tilt trailer that came with the boat, and the scissor trailer, which I bought separately. I wasn’t planning to keep the conventional trailer, but Miss Terry suggested it might be a good idea if we ever want to take the boat someplace else, or even if we take it back to the dealer for service. I never thought about that. But then again, she’s a lot smarter than me.


I’ve never been real good at backing up trailers, and it took a while to get used to backing my 16 foot Key Largo Center console boat, so I was a bit apprehensive about getting this bigger boat into our driveway, but with Terry and our friend Jim Lewis guiding me, it was a piece of cake. If anything, I think it was easier than the Key Largo. I put it in place on the first try. Then again, next time it might take me forever. 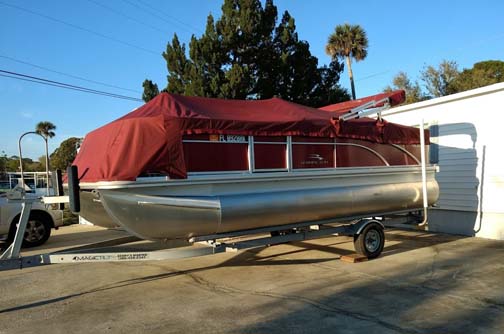 So right now, we are boat poor. We have the new pontoon boat, the Key Largo, our two Sea Eagle inflatable kayaks, and our two Old Town Predator kayaks. The highest rank I ever achieved in the Army was buck sergeant, but with six boats, does that make me a Commodore?

Actually, the Key Largo is going to be sold. It’s on consignment at Gerry’s Marina in New Smyrna Beach, the same dealer where we bought the pontoon boat. 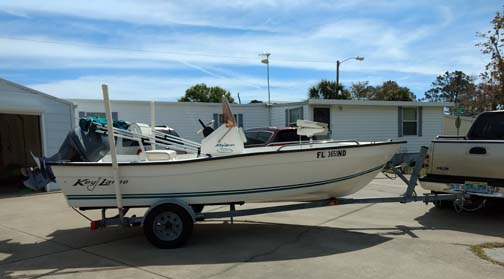 When we first started looking at boats a long time ago, one of the first people we met was Rich Finello from Gerry’s, at a boat show in Daytona Beach. We talked to three or four salespeople from different dealerships at the show, and I told them all that I was going to buy a pontoon boat, I just wasn’t sure when because I had a lot of homework to do first. Since then I’ve talked to three or four other salespeople at different places. Out of all of them, Rich was the only one who ever followed up. He called me several times to check in on us, no pressure, just wanted us to know he was still thinking about us, he had me come down a couple of times look at used boats that came in that he thought might work for us, and he patiently answered lots of questions for me about boats and trailers since we first met. That’s how you build a customer relationship, and that’s why we bought from Rich.

Now I can’t wait to get out on the water and catch some fish!

8 Responses to “And The Winner Is…”