Lavish plantation homes are the symbol of the antebellum South and throughout the region stretching from Georgia to Mississippi, many fine examples of these old homes have been lovingly preserved and restored. While some remain in private hands, serving as homes or bed and breakfast operations, others are owned by historic preservation organizations that open the old buildings and grounds for tours. One, Melrose, is owned by all of us and administered by the National Park Service as part of Natchez Historic Park.

Perhaps no city can boast as many opulent homes as Natchez, Mississippi. Before the Civil War Natchez was one of the wealthiest cities in America, counting more than half of the millionaires in the country as residents. They left behind several beautiful homes including Monmouth, Longwood, Dunleith, Rosalie, Stanton Hall, and Melrose. Melrose has been called the most intact antebellum estate in the United States for good reason.

Built in the 1840s, Melrose was the estate of John T. McMurran, a northerner who rose from being a middle-class lawyer to a position of wealth and power as a planter in antebellum Natchez. The 100 acre property, bordered on three sides by bayou channels, lay fallow as part of a used-up cotton plantation at the time of McMurran’s purchase in 1841. He soon began construction on a two-story Greek-Revival style home that would be the envy of his friends and business associates. In those days, an estate home was not only a place to live, but testimony to the success and social standing a man had achieved. 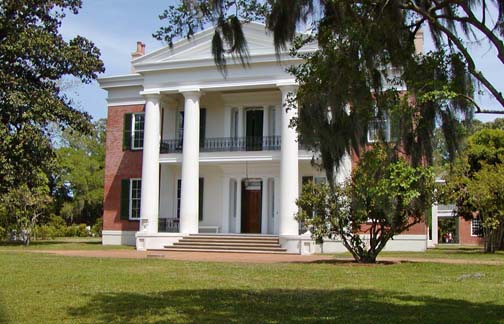 The McMurran family was plagued by bad luck during the quarter century they owned Melrose, including the deaths of children and grandchildren, and the loss of their fortune during the Civil War. Elizabeth and George Malin Davis purchased Melrose from the McMurrans in 1865, after Union soldiers occupied their home, Choctaw. Included in the purchase were most of the home’s furnishings and decorations.

Fate was no kinder to the Davis family once they moved into Melrose. Their daughter Frances died as a child. Her beautiful Victorian funerary portrait is now on display at Melrose. In 1883 the death of their other daughter, Julia, left her six-year-old son, George M. D. Kelly, as the sole heir to Melrose, Choctaw, two other Natchez mansions the family owned, and thousands of acres of plantations in the fertile Louisiana bottomlands across the Mississippi River.

After his mother’s death, young George Kelly was raised by his maternal grandmother in New York, and former family slaves cared for the Melrose estate and its furnishings while the mansion remained closed for the remainder of the nineteenth century.

In 1900 George Kelly married New York debutante Ethel Moore Kelly. They moved to Natchez and set up house at Melrose. Their efforts to restore the mansion after its years of closure are generally credited as the first historic preservation efforts in the state of Mississippi.


The wealthy young couple indulged their passions for traveling, photography, and adventure. They purchased the first automobile in Natchez, and the hundreds of photographs they took recorded invaluable images of the Melrose house and grounds dating back to the turn of the Twentieth Century.

After Ethel Kelly’s death Melrose was sold, again with most of its furnishings, to John and Betty Callon of the Callon Petroleum Company. Melrose became the new home of the wealthy couple, who soon started a massive restoration of the historic buildings and grounds.

During the Callons’ ownership, Melrose served as their home, the setting for lavish corporate entertainment in the property’s park-like setting, a bed-and-breakfast establishment, and the setting for a number of movies that were filmed at the home over the following decade.

The Callons were careful to include preservation issues as part of their restoration efforts, and National Park Service curators found cabinets in the attic filled with historic fabrics removed when the home’s furniture was being reupholstered. Like the Kellys before them, the Callons also took hundreds of photographs documenting their restoration projects, giving historians a wealth of information on the estate. They were hesitant to dispose of anything left by the home’s earlier owners, and the barn and carriage house yielded hundreds of tools and other camping, hunting, gardening, or automobile-related artifacts from the time George and Ethel Kelly owned Melrose.

The annual Spring Pilgrimage Historic Homes Tour is an important social event in Natchez. During Spring Pilgrimage, the grand ladies of Natchez dress in the historic costumes of their ancestors and welcome visitors into their homes. With its inclusion in the first Spring Pilgrimage tour in 1932, Melrose began the transition from private home to tourist attraction.

In 1990, the National Park Service purchased Melrose and it became a component of the Natchez Historic Park. After more than 130 years as a private home, Melrose is now a museum dedicated to historic preservation and interpretation.

The National Park Service is committed to preserving the estate in original condition, and today visitors can tour the home with a Park Ranger who points out the original furnishings and decorations, giving visitors a firsthand view of what life was like for the wealthy families who lived here in an earlier time. 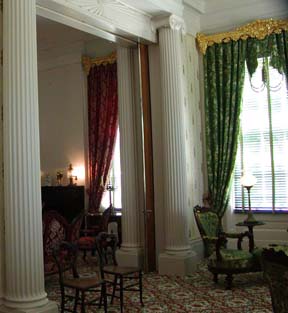 No expense was spared in the construction of Melrose and the details are amazing and beautiful, including the original hand-painted canvas floor covering, the precursor to today’s linoleum. Several photographs of members of the families who lived here, along with displays of their clothing and personal artifacts help bring them back to life during the tour. 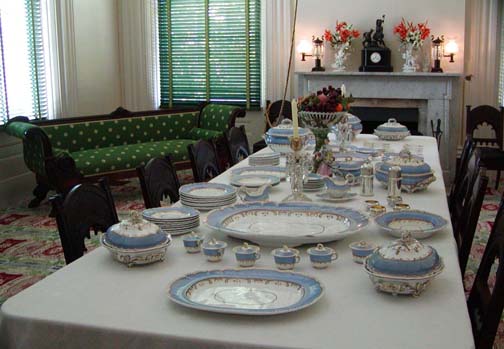 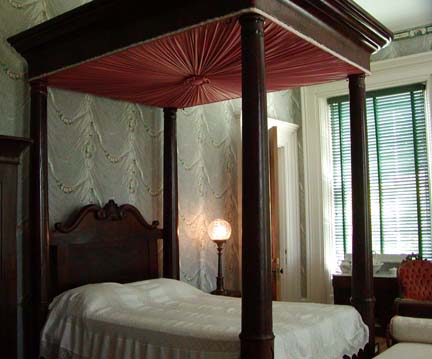 Like the other finely preserved Natchez homes, Melrose was never a true plantation home, but rather a planter’s home. Most of the actual plantations were across the Mississippi River in the Louisiana bottomlands, rich soil that was great for growing cotton, but also home to mosquitoes that spread malaria. The wealthy planters who owned the plantations left the day to day operations to overseers who lived on the land, while the owners themselves lived in Natchez, whose high bluffs afforded cooler breezes and a healthier environment.


John T. McMurran, who built Melrose, had several plantations worked with slave labor, and also kept slaves at Melrose. The slaves who lived at Melrose mostly worked in domestic jobs as servants, cooks, and coachmen, as well as maintaining the estate’s buildings and grounds. Today a couple of the slave houses have been preserved and give visitors a glimpse of the life these slaves led. 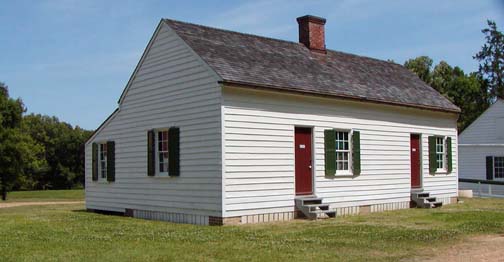 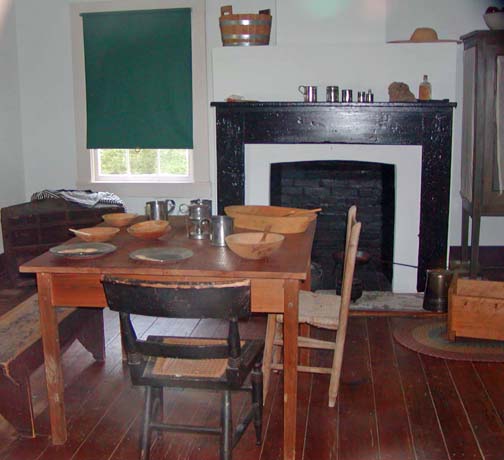 Melrose is one of the best preserved and most significant antebellum historic sites in the entire South. The excellent preservation of the property along with a rich collection of original items that includes letters, diaries, clothing, furniture and other items belonging to the people who lived here, make it a unique experience. Original and period historic furnishings include painted floor cloths, mahogany trim, a set of Rococo Revival parlor furniture, a complete set of Gothic Revival dining room chairs, and bookcases housing books that date back to the 18th century associated with many prominent Natchez families.

Exhibits in the main house allow visitors to truly step back in time when they tour the home. The guided tour of Melrose helps visitors understand what life was like for all of the people who lived on the estate, both family members and slaves alike.

Admittance to the grounds at Melrose is free, while tours of the house are $8 per person. Golden Age and Golden Access passes are honored. The parking area and entrance drive at Melrose are not suitable for large vehicles, so it is advised to leave your RV at one of the local RV parks or the Visitor Center in Natchez and drive your tow vehicle. For more information on Melrose and the Natchez Historic Park, write NPS, 640 South Canal Street, Box E, Natchez, Mississippi 39120 or call park headquarters at (601)442-7047.

Be sure to enter our Free Drawing. This week’s prize is an audiobook of Big Lake Blizzard, the fourth book in my Big Lake mystery series. To enter, all you have to do is click on this Free Drawing link or the tab at the top of this page and enter your name (first and last) in the comments section at the bottom of that page (not this one). Only one entry per person per drawing please, and you must enter with your real name. To prevent spam or multiple entries, the names of cartoon or movie characters are not allowed. The winner will be drawn Sunday evening. 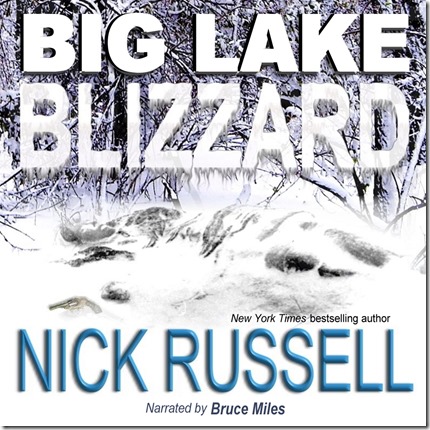 Thought For The Day – Do not speak unless it improves upon silence. – Buddha

One Response to “Melrose”