Samuel Clemens, better known as Mark Twain, was one of the world’s best-loved personalities during his lifetime, and even though he died over 100 years ago, he remains an icon in American literature today.

Born in the small settlement of Florida, Missouri on November 30, 1835, Samuel Clemens was the sixth of seven children born to John Marshall Clemens and Jane Lampton Clemens. Born just two weeks after Halley’s Comet passed overhead, young Samuel’s youth was a brief period. Three of his siblings would die as children, and a fourth would not live beyond age 20.

His father, a popular attorney and merchant, died when Samuel was eleven. Soon after that loss, the young boy went to work as a printer’s devil, doing chores at the newspaper in the Mississippi River town of Hannibal, Missouri, where the family had moved several years earlier. His youthful adventures in Hannibal would later become the inspiration for his popular books The Adventures of Tom Sawyer and Huckleberry Finn.

As a young man, Samuel Clemens moved around the country working as a newspaper typesetter, printer, reporter, and jack of all trades. He was self-educated, spending hours every evening reading books and periodicals in public libraries.

Clemens returned to Missouri, where he became a pilot on the riverboats plying the Mississippi River. At that time this was a highly paid and cherished position. The river was constantly changing its course and a trip on the river was always perilous, and a boatman was stationed at the bow to measure the depth of water with a plumb line. The crew member would call out the depth in fathoms. “Mark twain” meant the water was two fathoms (twelve feet) deep, and safe for navigation. When he became an author, Clemens used the old riverboat term as his pen name.

Clemens, or Mark Twain, loved his life on the river and the prestige that his job held, but it also lead to heartbreak that would haunt him the rest of his life. He had urged his brother Henry to follow in his footsteps, and when the boiler exploded on Henry’s boat, killing him, Clemens blamed himself for the tragedy.

He served a brief stint in the local Confederate militia during the Civil War, during which he later recalled “we got a lot of experience retreating.” Soon deciding that warfare was not to his liking, he moved to Nevada, where he returned to newspaper work, eventually moving on to San Francisco, where he also began a career in public speaking.


With his writing and publishing career beginning to flourish, in 1870, Twain married Olivia Langdon, the daughter of a wealthy and prominent New York family. The couple were the jetsetters of their time, traveling worldwide, living in Europe for years, and then at their handsome estate in Connecticut. A prolific author, Mark Twain’s works included A Connecticut Yankee in King Arthur’s Court, A Double Barreled Detective Story, A Horse’s Tale, Huckleberry Finn, Letters from the Earth, Personal Recollections of Joan of Arc, The $30,000 Bequest, The Adventures of Tom Sawyer, The Gilded Age, The Mysterious Stranger, The Prince and the Pauper, The Tragedy of Pudd’Nhead Wilson, Tom Sawyer Abroad, A Tramp Abroad, Following the Equator, Is Shakespeare Dead?, Life on the Mississippi, Roughing It, and The Innocents Abroad.

He was just as popular as a public speaker, and was welcomed on stages around the globe. Twain never took life, or himself, very seriously. Referring to his stage career, he once said “In October, 1866, I broke out as a lecturer, and from that day to this, I have always been able to gain my living without doing any work.”

The beloved author and speaker died April 21, 1910 in Redding, Connecticut and is buried in Woodlawn Cemetery in Elmira, New York with his wife Olivia and their children. Halley’s Comet, which had heralded his birth, passed overhead again the day before his death.

The small two room cabin where he was born was moved a short distance from its original location and is now housed inside the handsome Mark Twain Birthplace State Historic Site in Florida, Missouri, which is part of Mark Twain State Park. 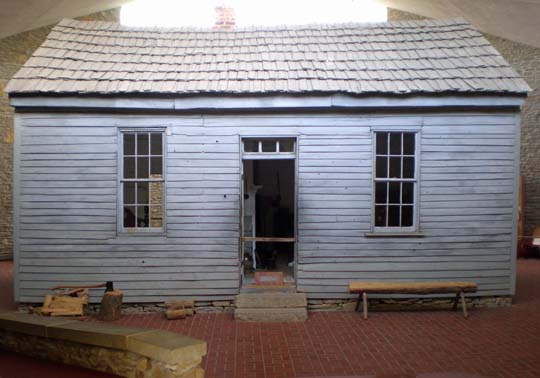 Besides the cabin where he was born, the shrine includes a museum with exhibits and audio-visual programs about the author’s life. Displays include original manuscripts of some of his work, first editions of many of his books, furniture from his Connecticut estate, his billfold and pipe, an early typewriter from his study, and the carriage he used in Connecticut. A public reading room is available for personal study and research. 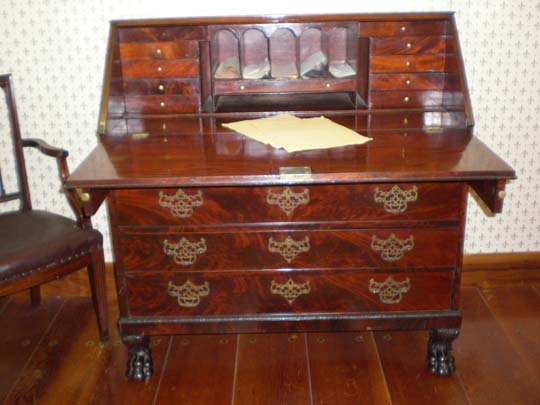 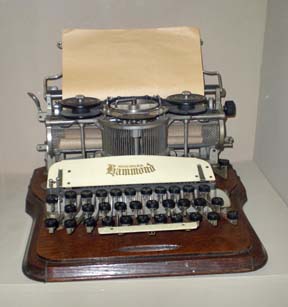 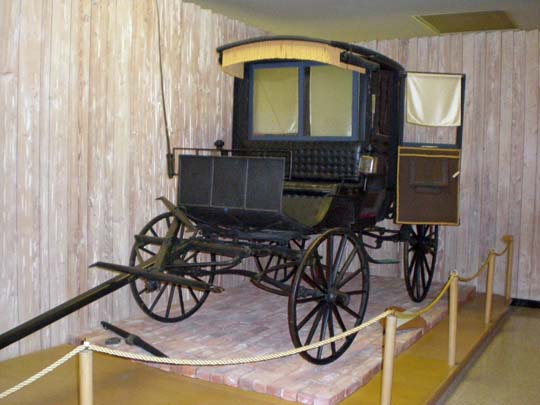 A red granite monument in the little village of Missouri marks the original location of the cabin at the time of Samuel Clemens’ birth. 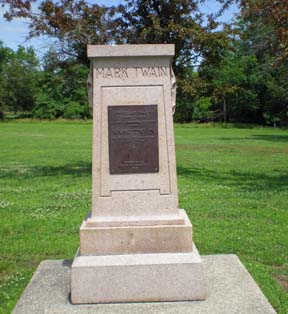 Mark Twain Birthplace State Historic Site is located about 35 miles west of Hannibal, Missouri, and is open daily except for New Year’s Day, Thanksgiving, and Christmas. The parking lot is not suitable for larger RVs, but Mark Twain Lake State Park has several RV campgrounds, and there are also commercial and Corps of Engineers campgrounds nearby. The faculty is handicapped accessible. For more information, call (573) 565-3449.

Thought For The Day – Beauty is only skin deep, but ugly goes to the bone.