It’s no secret that we are fans of museums, and some of the best museums that we have ever found have been in small towns. While on a brief stopover in Douglas, Wyoming we discovered one of the best historical museums to be found anywhere.

The Wyoming Pioneer Museum, located at the Wyoming State Fairgrounds in Douglas, Wyoming, doesn’t look like much from the outside, but inside they had an awesome collection of exhibits chronicling the state’s history, from the Native Americans who first called the region home, to the mountain men, prospectors, cattlemen, settlers, outlaws, and everybody else who passed through or made their homes there.

The Cowboy Gallery displays branding irons, lassoes, and saddles, including one owned by infamous gunman Tom Horn, who was hanged for the murder of fourteen year old Willie Nickell, the son of a sheepherder caught up in the middle of a range war. 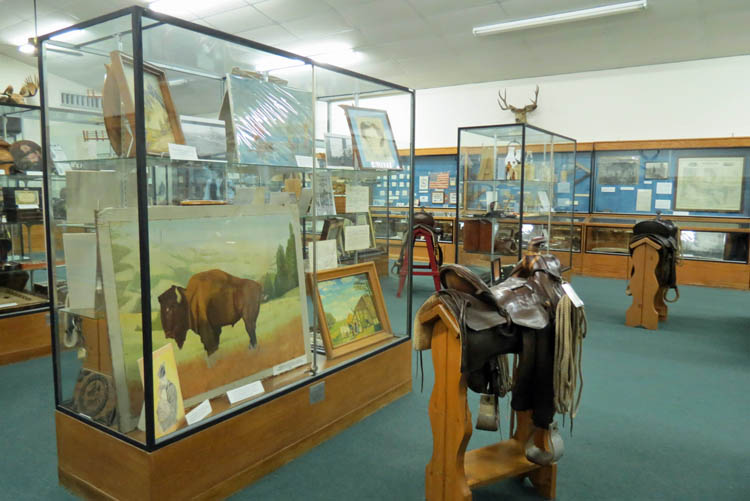 There was a nice collection of old guns, including this Colt Army Model .44 that a wagon man carried while hauling freight to nearby Fort Fetterman during the Indian wars.

This Colt .44-40 that local rustler George Pike carried. Note that the barrel was cut off to make it easier to hide the gun in his pocket. Local legend says that Pike died of a heart attack after winning a large hand in a poker game in a Douglas saloon. Since it was considered impolite to quit when ahead, the rest of the players propped the dead man up in a chair and a cowboy standing at the bar was drafted to play Pike’s hands. Even dead, his winning streak continued, and the story says that he won enough to pay for the handsome headstone that stands over his grave in the town cemetery. 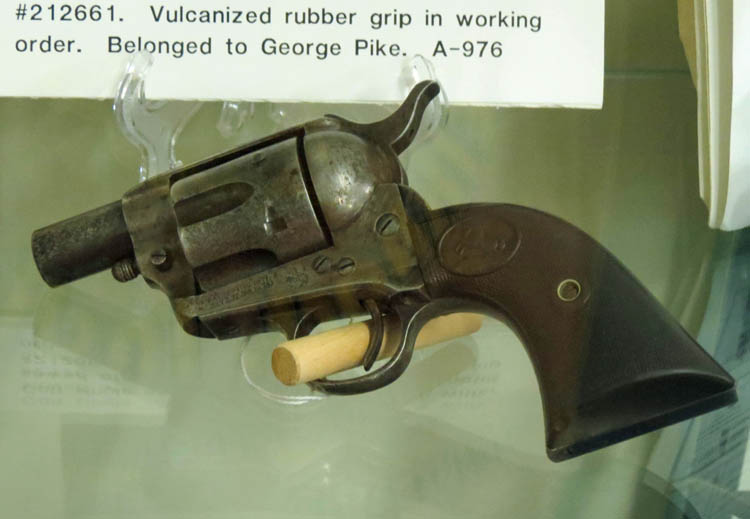 The museum’s Native American exhibit includes woven baskets, pottery, drums, and a hide tipi that was made for the movie Dances with Wolves, representative of an 1864 Sioux lodge tipi. Plains Indian tipis were semi-conical shaped and steeper in the back then the front to control smoke from the central fire. The size and number of poles varied among the different Indian tribes. The average Crow tipi used fourteen buffalo skins and poles could be 40 feet long. The women erected the tipis and were considered the owners. 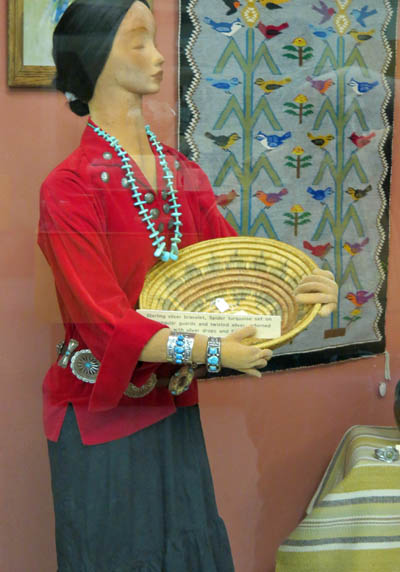 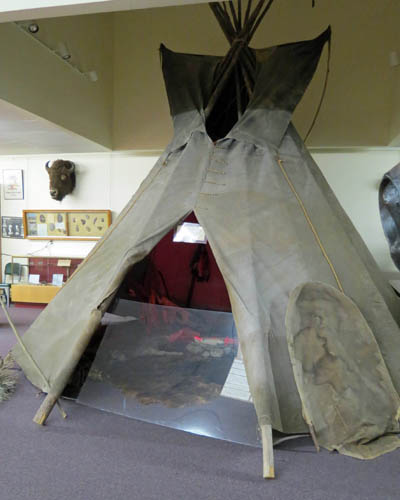 One exhibit displays the bones of a mammoth excavated from Bedtick Creek, south of Douglas. 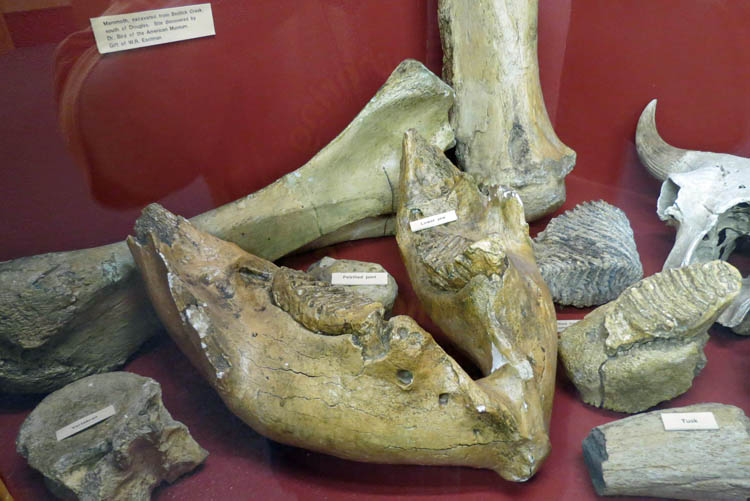 There is an entire gallery dedicated to life in Wyoming from pioneer days to the present that includes a collection of wedding dresses, cooking utensils, children’s toys, and typical parlor scenes. 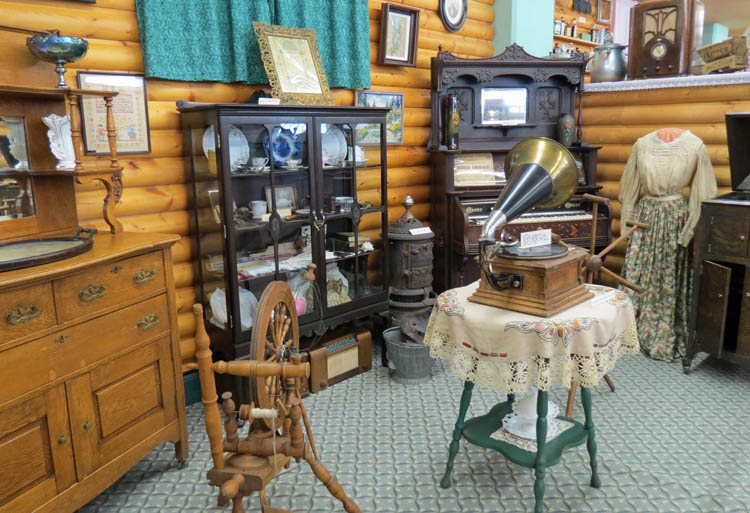 During World War II, a prisoner of war camp was established in Douglas, and there is a small display on it, including a uniform worn by one of the guards, and artifacts from the POWs.


This gigantic pair of bib overalls was worn by Charley Irwin, a popular rodeo performer, stockman, and railroad detective who weighed 500 pounds when he died. Irwin was a close friend of lawman turned hired gunman Tom Horn, and sang at the gallows when Horn was executed, at the condemned man’s request. Irwin formed a Wild West show in 1912 and toured the country for many years. He died in 1934 from injuries sustained in an automobile accident. Among his many friends were Will Rogers, Buffalo Bill Cody, and President Theodore Roosevelt. 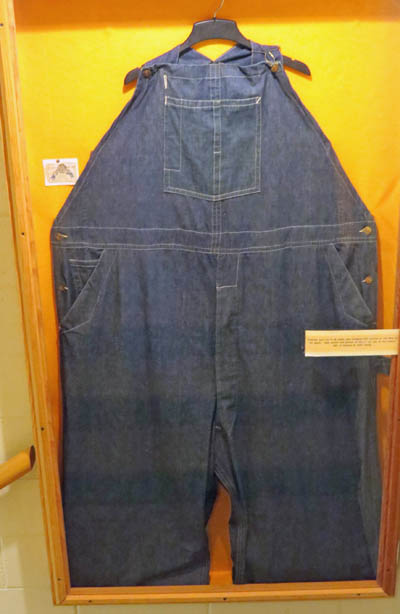 The museum also has a nice collection of early-day horse drawn buggies and wagons, along with plows and other farming equipment, an old time newspaper print shop, and this interesting old wood-rimmed bathtub from 1902. 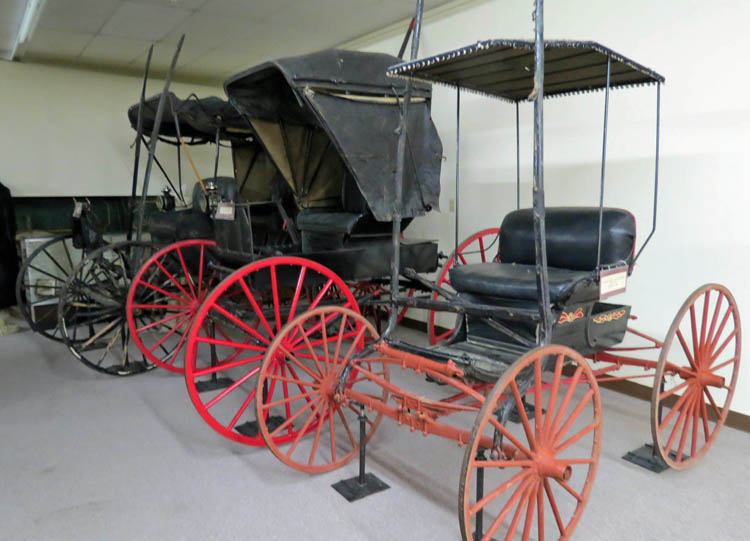 The Wyoming Pioneer Museum is open Monday – Friday from 8 a.m. to 5 p.m. and Saturdays from 1 to 5 p.m. during the summer. The museum is closed on Sundays and major holidays. Winter hours are Monday – Friday from 8 a.m. to 5 p.m. The Wyoming State Fairgrounds is located at 400 W. Center Street in Douglas, and has its own full hookup RV park. Admission to the museum is free, though donations are appreciated. For more information, call the museum at (307) 358-9288.


It’s Thursday, so it’s time for a new Free Drawing. This week’s prize is an audiobook of Big Lake Burning, the sixth book in my Big Lake mystery series. To enter, all you have to do is click on this Free Drawing link or the tab at the top of this page and enter your name (first and last) in the comments section at the bottom of that page (not this one). Only one entry per person per drawing please, and you must enter with your real name. To prevent spam or multiple entries, the names of cartoon or movie characters are not allowed. The winner will be drawn Sunday evening.

Thought For The Day – Most people would rather be certain they are miserable than to risk being happy.

2 Responses to “Honoring The Pioneers”