It was inevitable that the Spanish, French, and British would fight for hundreds of years over control of the New World, and the place we now know as Florida was one of the most hotly contested. Whoever controlled Florida controlled the rich shipping lanes coming from the Spanish Caribbean, and those world powers bathed the land in blood. War is always horrible, and atrocities were committed on all three sides over the years. One happened at a small spot on the Atlantic Coast a few miles south of present day St. Augustine in 1565.

The French had established a colony on land that Spain had claimed near what is now Jacksonville, and built Fort Caroline to protect it. King Philip II of Spain ordered General Pedro Menéndez de Aviles to remove the trespassers. The Spanish prepared for war by building a base south of there at St. Augustine.

In response, on September 10, 1565, the French sent a force commanded by Jean Ribault to attack St. Augustine. Their plan went awry when a hurricane carried thier ships too far south, where they wrecked on the Florida coast near present-day Daytona Beach.

At the same time, Menéndez moved north to attack Fort Caroline. With most of the soldiers gone, the Spanish captured the French settlement, killing most of the men left there in the battle. Menéndez spared the women and children and sent them to Havana by ship.

Shortly afterward the local Timucuan Indians reported that a group of shipwrecked Frenchmen were on the beach a few miles south of St. Augustine, trying to make their way back to Fort Caroline. Menéndez hurried back south to find 127 of them at the mouth of a small river. Mostly unarmed and without provisions, the French surrendered. But when Menéndez demanded that they give up their Protestant faith and accept Catholicism, 111 Frenchmen refused and were immediately killed.


The horror was repeated just two weeks later, when another group of 134 French shipwreck survivors appeared at the inlet, including their leader, Jean Ribault. Unaware of what had happened to their countrymen, they surrendered to the Spanish, and once again Menéndez ordered his prisoners to renounce their faith. When they refused, they were all massacred. From that time on the inlet and river were called Matanzas, which is Spanish for “slaughters”.

Eventually the French gave up on Florida, only to be replaced by the British. They had unsuccessfully laid siege to St. Augustine twice, in 1702 and again in 1740, giving up when their cannonballs bounced off the impenetrable walls of the massive Castillo de San Marcos that protected the seaside approach to the city. Florida Governor Manuel de Montiano knew it was only a matter of time before they returned, and recognized a weak point in his defenses; the undefended inlet at Matanzas. The British could come up the river and attack from the rear, avoiding the deadly guns of the Castillo. Governor Montiano ordered a fort to be built to guard this vulnerable point.

Convicts, slaves, and Spanish troops were pressed into service to build the fort, which was located on present-day Rattlesnake Island, with a strategic position commanding Matanzas Inlet. 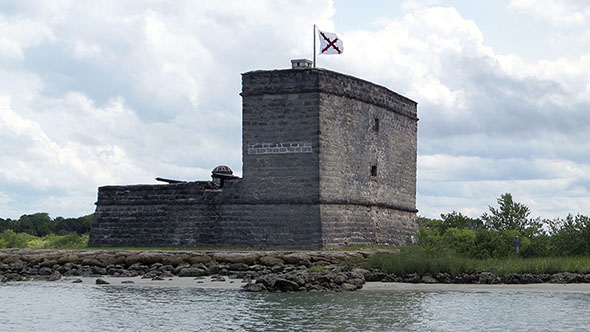 As the fort, which the Spanish named Torre de Matanzas (Matanzas Tower), was nearing completion in 1742, a British fleet of twelve ships approached but were driven off by cannon fire. This brief skirmish was the only time the fort fired on an enemy, but it proved how wise the decision to build it had been. 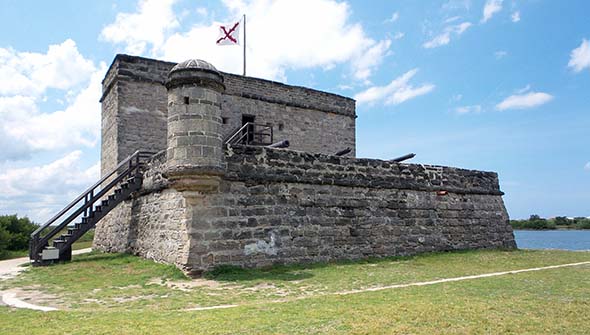 The fort is a masonry structure made of coquina, the same shell stone building material used at the Castillo de San Marcos. It was armed with five cannon, four six-pounders and one eighteen-pounder. Duty at the fort was on a rotating basis for soldiers stationed at the Castillo, usually for three weeks at a time. Typically one officer, four infantrymen, and two gunners were stationed there. 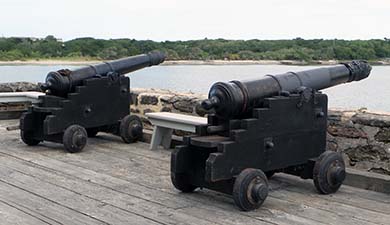 The small fort did not have much to offer in the way of creature comforts, just a few rough bunks and tables, with benches to sit on, and a fireplace for cooking and to provide heat. Rations consisted mostly of beans and cornmeal, and whatever the soldiers could hunt or catch in the river. The soldiers lived in a room at the lower level, while the officer was in a room above them. Gunpowder was stored in barrels in a small chamber off his room, as was all food, so he could control dispersal of both. 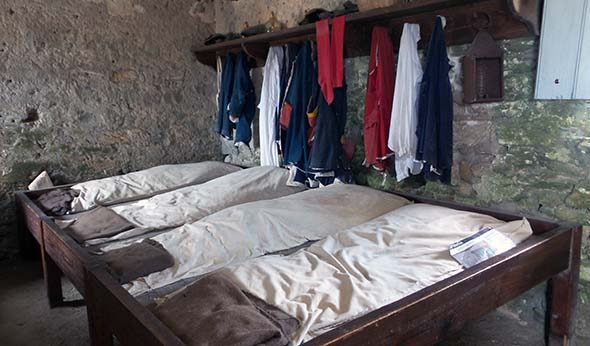 By the time the United States took control of Florida in 1821, the old fort has been abandoned and was not much more than a ruin. In 1916, the U.S Department of War began a major restoration of the fort, and in 1924, Fort Matanzas National Monument was established. It is operated by the National Park Service in conjunction with the Castillo de San Marcos National Monument in St. Augustine.

Today visitors can pick up a free boarding pass at the Visitor Center on the mainland and then take a short ride across the river to Rattlesnake Island on a pontoon boat to tour the fort. Rangers explain the fort’s history and relate what life was like at this small outpost that was built to protect an important part of Spain’s colonial empire.

A wooden ladder leads to the top, where one can enjoy the views of the surrounding land and the sea approach to the inlet. It’s a peaceful setting now that belies the terrible events that took place near here so long ago.

Fort Matanzas National Monument is located about fifteen miles south of the historic district of St. Augustine, Florida. The physical address is 8635 A1A South, St. Augustine. The fort is open to the public from 9 a.m. to 5:30 p.m. every day of the year except Thanksgiving Day and Christmas Day. The ferry to the fort carries 35 people on a first come, first served basis and leaves the Visitor Center dock on the half hour from 9:30 a.m. to 4:30 p.m., weather permitting. For more information, call (904) 471-0116 or visit the fort’s website at https://www.nps.gov/foma/index.htm


Congratulations Rosanne Lloyd, winner of our drawing for an audiobook of Big Lake Burning, the sixth book in my Big Lake mystery series. We had 63 entries this time around. Stay tuned, a new contest starts soon.

Thought For The Day – Alimony is like buying oats for a dead horse.