Many years ago when we were in high school, my buddy Dan Connell was a pretty good pool player. Good enough that none of us in our crowd would ever play him for money. Back then you could buy 3.2 percent beer at age 18, so three or four of us were sitting in a bar thinking we were all grown up and feeling our oats.

There were two old guys playing pool off in the corner, and by old I mean they were ancient. They must have been at least 60! Some of us goaded Dan into challenging one of them to a game, and as I recall the bet was five dollars. It took a couple of us pooling our funds to come up with that much money, but we did, and I’ll be darned if Dan didn’t win! How cool is that? Of course, it was only fair to give the poor old geezer a chance to win his money back, so they played a second game. And Dan won again. And then he won a third time. Talk about easy money!

Then the old guy told Dan he needed to be heading home to take his Geritol or watch Lawrence Welk, or something like that, and asked for one more game before he left. But this time he laid a $50 bill on the table. Wow! We were going to be eating high on the hog after Dan won that game. We didn’t have $50 between us, but I did have the title to my old 1959 Ford, so I put that up as collateral. (Yes, when I was a teenager you could work a summer job and buy a decent used car for $50.) After all, as poorly as that old guy played and as well as Dan worked that cue stick, we knew we had nothing to fear. You can see this coming, right?

Feeling generous, Dan agreed to let the old codger have the break, and he never got the chance to take a shot after that. That old fart went from scratching the cue ball on just about every shot and missing everything he aimed at to clearing the table nonstop. Yep, we had been hustled!


We stood there looking at each other, sick to our stomachs and with me wondering how the hell I was going to explain to my dad that I had lost my car in a pool game that I wasn’t even playing. That’s when the old guy grinned and took pity on us. He took back the $15 Dan had won from him and told me to keep my damn car. He also told us that we should never forget that there was a hustler in every barroom in the world, and since we weren’t all that smart, we’d best try to avoid them. Lesson learned.

Well, I thought the lesson had been learned, but now that I am the old geezer (and then some), I find myself suddenly surrounded by hustlers. As you know if you read this blog very much, we like to play darts, and spend quite a bit of time out in our garage throwing them. Our friend Jim Lewis introduced us to the game a year or so ago, and he is darned good at it. While I take more of a shotgun approach, throwing wildly and hoping I’ll hit something somewhere, Jim carefully aims his darts and throws some amazing groups. Like this one. 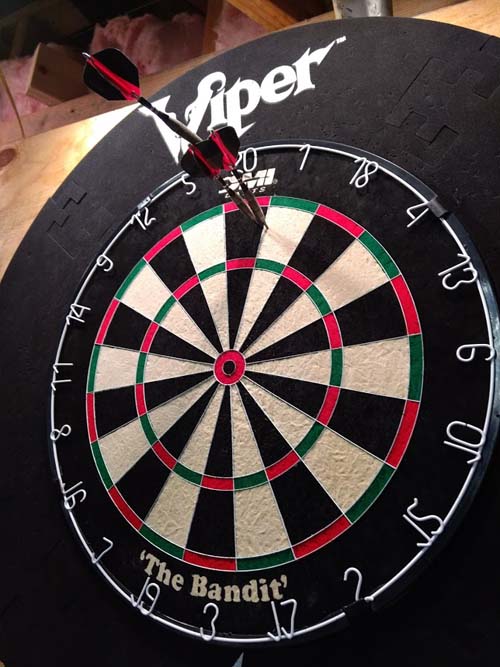 Yesterday afternoon Miss Terry and I decided to throw a couple of games, and she threw two darts in a row into the center bulls-eye, which is the most desirable place to hit since each one counts as two points and you need three points to close the target. Even though she had just won the game and didn’t need to do it again, I dared her to try it, knowing there was no way in the world she would get that lucky again. Wrong! She threw her third dart and hit the same place again. I couldn’t do that in a million years. 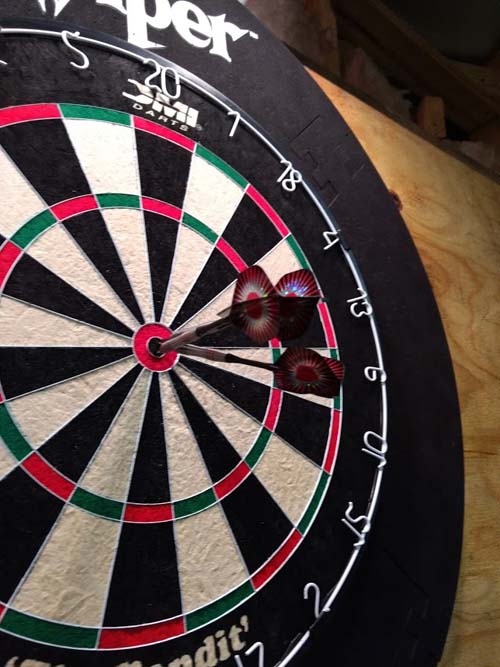 I can tell you one thing, I’m no fool and I still remember the lesson that old man taught me so long ago. I’m keeping the title to my car locked up in the safe!


A lot of you do your online shopping by clicking this Amazon link or the Amazon Search box at the top right sidebar of this blog. We appreciate that because when you purchase an item on Amazon any time of the year from one of our links, we earn a small commission, which helps us offset the cost of publishing the blog.

Today is your last chance to enter our Free Drawing for an audiobook of Fly Paper Soup, the first book in my friend Cleve Sylcox’s David Winters mystery series. The story starts with an attorney leaving warm and sunny Florida to go to cold and snowy Missouri to help an old friend whose aunt has been accused of murder. But then he finds out that the woman in question seems to have a history of killing husbands and getting rich from their insurance policies. Buckle your safety belt…you are in for a wild ride! To enter, all you have to do is click on this Free Drawing link or the tab at the top of this page and enter your name (first and last) in the comments section at the bottom of that page (not this one). Only one entry per person per drawing please, and you must enter with your real name. To prevent spam or multiple entries, the names of cartoon or movie characters are not allowed. The winner will be drawn this evening. 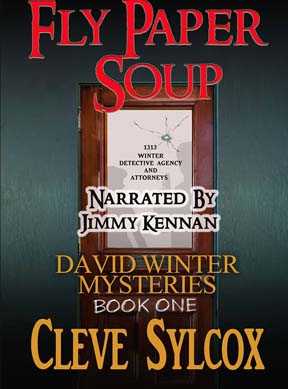 Thought For The Day – The trouble with retirement is that you never get a day off.

3 Responses to “Surrounded By Hustlers”