Nick's Blog » Rambo Was A Wuss

Is there anyone out there who hasn’t seen at least one of the Rambo movies? A generation of American males grew up thinking John Rambo was about the baddest of the bad. But as it turns out, Rambo was a wuss. I know, because  I saw some guys yesterday that would make Rambo wet his diaper.

Every once in a while Terry and I like to go to the small swap meet in nearby Oak Hill and wander around looking for bargains. We were doing that yesterday morning, and by the time we left the place, I was about to wet my diaper! We were standing by a vendor table when a fellow about my age walked up out of the blue and told the vendor he had joined the Army so he could go to exotic places, meet interesting people, and kill them. “And that’s what I did,” he added. “A whole bunch of them.”

Okay, so the guy’s a psycho or a wannabe. Or both. They are out there. But it wasn’t two tables further when I overheard another fellow about my age talking about the 30 confirmed kills he had in ‘Nam. Wow, two of them in that short distance? Somebody must be spiking their Geritol. We made it over to the next aisle, where a vendor had a display of knives, and there was a third guy talking about the “good old days” when he would leave his platoon’s perimeter at night, slip out and kill “gooks” and cut their ears off and bring them back as souvenirs. I told Terry I wanted to get out of there before those guys got together, because who knows what could happen?

We’ve all run across people like this, and I can guarantee you that anybody who walks around saying things like that has never heard a shot fired in anger. People who have really been where things get hot and ugly don’t bring it up as part of everyday conversation. I’ve personally known two men who won the Congressional Medal of Honor, our nation’s highest award for valor, and neither of them ever spoke about the actions that won them their medal. Even so, Rambo better stay out of the state of Florida. We’ve apparently got some real wack-a-doodles here.


But it’s not just Florida. Years ago Terry and I were staying at a campground in the Black Hills of South Dakota when the fellow in the motorhome next to us walked up and told us he was a former Army sniper with over 100 confirmed kills, and was now working as a hit man for the CIA. He said he carried a special satellite phone with him 24/7 so that headquarters could call him anytime to give him his next assignment. Well, alright then. Good luck and Godspeed!

On that same topic, my neighbor Chris posted this patch he saw on his Facebook page the other day. Can you spot all the things wrong with this? 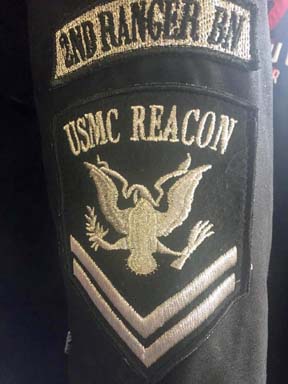 If not, I’ll help you out. First of all, the eagle and chevrons indicate a U.S. Navy petty officer. However, the eagle doesn’t have a head. But it says USMC (United States Marine Corps) Force Reacon. I have no idea what Force Reacon is, but the Marine’s Force Recon are highly trained special operations personnel, kind of like Navy SEALs or Army Green Berets. And then at the top of the patch it says 2nd Ranger Bn. The 2nd Ranger Battalion is an elite U.S. Army unit that has seen service since World War II, and continues to serve our country in the War on Terror.

I’m sure whoever the clown was that was wearing this patch is another one of those wannabes who has read way too many paperback novels and watched too many movies for his own good. Maybe he wears it because he wants to impress somebody with all the combat he’s been in. But I can guarantee you, sooner or later he’s going to run across some real vets, and then he very well might experience combat!

Congratulations Jeannine Sheridan, winner of our drawing for an audiobook of Highland Passage by J.L Jarvis. We had 39 entries this time around. Stay tuned, a new contest starts soon.

10 Responses to “Rambo Was A Wuss”