In my blog He Created Horror a few days ago, I told you about the life of Edgar Allan Poe and our visit to the Poe Museum in Richmond, Virginia. Today I’ll tell you a story that shows that real life can be more ghastly than anything Poe and authors like him could ever conjure up in their heads.

Pike County, Kentucky, in the foothills of the Appalachian Mountains, has a grim history as the site of the infamous Hatfield – McCoy feud, which began during the Civil War and continued for over 20 years, claiming numerous lives along the way. But that is just one tragic story from Pike County, and not even the worst.

When young Octavia Smith married James Hatcher in 1899, she surely must have thought she was in for a wonderful life. After all, her 30 year old husband was one of the most successful businessman in Pike County. He owned a coal company, a timber company, had extensive real estate holdings, warehouses, owned a steamship called the Mountain Girl, and was a building contractor. Well respected by all who knew him and a major figure in local Democratic political circles, he was certainly a catch. His Hotel Hatcher on Main Street in Pikeville was the most popular lodging house in the region.

By all accounts, theirs was a happy union, though it didn’t last long. Two years after their marriage, in January, 1891, Octavia gave birth to a son, whom they named Jacob. But in those days of high infant mortality, the child only lived a few days. His death plunged Octavia into a deep depression and she took to her bed, refusing to eat or even speak to anyone for months.


James tried everything he could to lift her spirits, without success. Eventually Octavia fell into a coma and could not be roused. Doctors were called and could not find a heartbeat and pronounced her dead on May 2nd. Her body was not embalmed and Octavia was buried soon after, just one more sad story from the foothills. 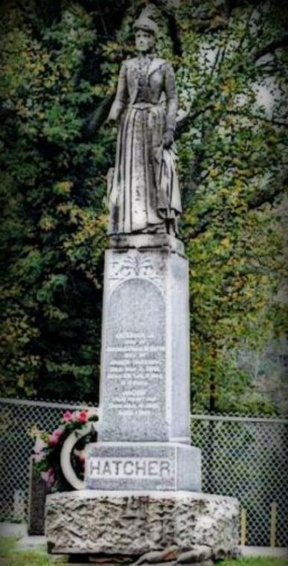 But soon after, other people in Pike County also became ill, exhibiting the same symptoms Octavia had. And like her they fell into comas. But then, within a short span of time they woke up. Mystified, physicians decided that they had all been bitten by some type of fly or mosquito, which caused their “sleeping sickness.”

Horrified, James and members of his family rushed to the cemetery and exhumed Octavia’s grave. The terrible truth they saw when they opened the casket would become the stuff of legends. While she had been buried lying on her back in the coffin, the body was now faced down and the interior lining had been shredded. Her fingernails were broken and there were deep scratches in her face, all evidence of the mighty struggle she had put up when she awoke and found herself buried alive.

They say that James Hatcher was a broken man after that. And who can blame him?

With a story this macabre, it should come as no surprise that there are many tales about Octavia. Ever since her death, people have claimed to hear a mournful wailing from the cemetery late at night, and there been numerous reports of her ghost being seen around Pikeville. For years local legend said that on the anniversary of her burial, her statue atop her monument would turn on its own to face away from the town that had turned its back on her. The monument originally included Octavia holding her baby in her arm, but vandals broke the arm off, and now the baby rests on the ground next to the statue. In later years, descendents of James Hatcher erected a fence around the grave to protect it from further desecration.


Many people who are interested in history go to Pike County to see the locales associated with the infamous Hatfield – McCoy feud. But while those two mountain families made peace years ago, the sad tale of Octavia Smith Hatcher lives on today, long after her death.

Thought For The Day – You know you’re getting old, when Santa starts looking younger.