Scammers and con artists seem to be out in force this holiday season and every time I turn around I hear about a new one. Folks, you can never be too vigilant. When someone starts giving you a line of crap, listen to that little voice in your head, not to their spiel.

I got an email last night from someone who got bilked out of $20 while staying in a big RV park in Texas. He said they checked in, got their site information, and parked their motorhome, and while he was hooking up their campground utilities a young man came up, addressed him by his last name, apologized for the inconvenience, and said there had been a mistake at the office. He was told that he needed to pay an extra $20 because they had forgotten to include the tax. The RVer said he was busy getting set up and would go to the office and take care of it as soon as he was done. The young man said that he was sorry, but he needed to collect it right then or they would have to disconnect everything and leave. Frustrated, the RVer handed him a $20 bill and the young man said he would be right back with a receipt.

Of course, he never came back. When the victim went to the office to complain about the extra charge and to get his receipt, he was told they had no idea what he was talking about. Apparently this bold young con man read their last name from the windshield slip they had been handed in the office, and that was enough to convince the RVer he was for real and to pay up. I know a lot of you are reading this and saying “I wouldn’t have fallen for that.” But apparently it worked this time around.

Three or four years ago somebody was doing something similar in Quartzsite, telling dry campers they had to pay a new $5 fee the Bureau of Land Management had just instituted, and taking their name and RV license number. He said it was so they could be located in an emergency. I don’t know how many people believed that one, but apparently some did before somebody thought to contact one of the BLM rangers to see if there was any truth to it. Obviously, there wasn’t.


More than once while fueling our motorhome in a truck stop we had people come up to us saying they were truckers who had a load that had to be disposed of because of a delivery issue or some excuse like that, and offering to sell us everything from TVs to iPads to cell phones for just a few bucks. No thanks, I’m not giving you any money for that box and the piece of plywood you put inside of it to give it some weight.

The other day, here in Edgewater, Florida, an elderly woman was approached by two women in a grocery store parking lot, telling her they had found a box with $60,000 in it and asking what they should do. She suggested they call the police, but instead one of them made a call to her “attorney” who said they should split the money three ways. But first the victim had to give them $6,000 to cover the attorney’s fees. She did and they disappeared with her money.  Again, you say you wouldn’t fall for that, but a lot of people have, because it’s an old scam that has been working for a hundred years.

Just yesterday I received two phone calls from someone at 727-451-7562 saying they are from JP Morgan Chase and that “my customer” Amazon wants to change the way I am being paid and wanting my personal info to be sure my money got to me. Since Amazon contacts its authors by email, it was obvious this was a scam, too. I didn’t give them any information and hung up on them both times. I found this online, confirming what I already knew, that they were definitely scammers: http://www.scamcallwho.com/number/7274517562

And the list goes on and on. Phone calls from the IRS saying you need to give them money right now or a policeman is going to come and arrest you. Phone calls that you have an outstanding warrant, and again they need your credit card information for payment immediately for you will be sleeping in jail tonight. E-mails from somebody you know telling you they are on vacation and have been robbed and need you to wire them enough money to get back home, and all kinds of other things that most people say they wouldn’t fall for. But those scammers would not be making those calls unless they paid off now and then and they were getting enough money from their victims to make it worth their trouble.

I believe the most interesting call like that I received was a couple of years ago, when someone said they were holding my son at gunpoint and if I didn’t give them $10,000 immediately they were going to shoot him. I told him that times are hard and I didn’t have that much money, and that I never really liked the kid anyway, so go ahead and shoot him. When I called my son to tell him I was sorry that I wouldn’t pony up that much money to keep him alive, he totally understood.


If you get a call from a phone number you don’t recognize, the easiest thing to do is not answer it. And if you do answer, and someone starts feeding you a line of BS, just hang up. If somebody approaches you asking for cash because of something that doesn’t make any sense, don’t fall for it. Just walk away, or pull out your phone and tell them you’re calling the police. You worked too hard for your money to give it away to some con artist.

My new book, Big Lake Snowdaze, has been out about 24 hours now and is already climbing the charts on Amazon. Thank you to all of you who bought copies, told your friends about it, and shared a link to it on your blogs and in your email. It’s much appreciated. 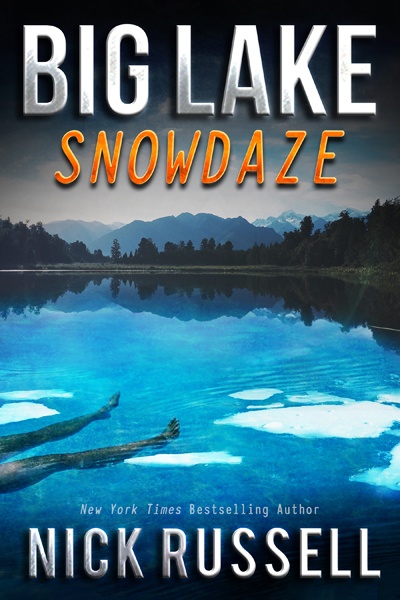 Thought For The Day – Only an accountant understands the real meaning of Christmas.