Blog reader Randy McRae sent me an email yesterday asking me why there was no free drawing this week. Randy thought it was because of the holiday, but the truth is I goofed and just completely forgot about it. Sorry about that. I’ll get back on track for next week.

This last week was really busy for us. I got a lot of online researching done for some future writing projects, as well as working on my new John Lee Quarrels book. Terry spent a lot of time getting her loom set up for a new weaving project, and we had to run down to Titusville on Wednesday for an appointment with Terry’s eye doctor.

For quite some time Terry has been having some vision problems, and an eye exam a year or so ago in Mishawaka, Indiana revealed the beginning of cataracts. The ophthalmologist there told her that it would be at least a year before they were “ripe” and ready for surgery, which tied in pretty well with her becoming eligible for Medicare past this summer.

So two weeks ago she went to Kutryb Eye Institute in Titusville, on the recommendation of friends, fully expecting them to tell her it was time for the cataract surgery. But as it turned out, the doctor there said her problem is extreme dry eyes and recommended a brand of over-the-counter eye drops. He told her to come back in two weeks and they would see how things were going then

As it turned out, the drops didn’t help, so she went back and he put plugs in her tear ducts, and suggested she switch to Retaine eye drops. I had never heard of that before, and neither had Terry, but apparently the natural tears that lubricate the eyes were draining away too fast, and the plugs are supposed to stop that. They will last for about 90 days before they dissolve, then she will return and see how things are going and to get longer lasting plugs. She did see an immediate improvement in both her comfort level and her vision after the plugs were inserted, so we are optimistic.


Since we were in Titusville, and it was getting close to dinnertime, we decided to go to the Irish Pub again. We discovered this small place when we were in Titusville a while back, and Yelp reviews said they had some of the best fish and chips around. As it turns out, they were right, and I ordered the same thing this time around. Terry decided to be more adventurous and tried the Irish Sampler, which included fish and chips, shepherd’s pie, and corned beef. She said all three were delicious, but the next time we eat there she will probably just order a serving of the shepherd’s pie, because it was that good.

And since it’s been a few days I shared any of the funny signs we saw in our travels or that our readers have sent us, I thought I would do that today. Signs are usually put there for a reason, but I can’t think of one reason in the world I would ever want to obey this one! 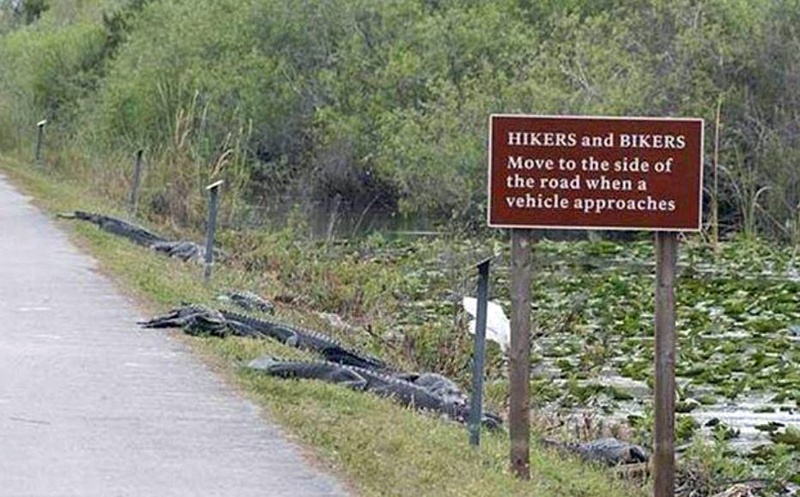 In closing, a blog reader asked me what yesterday’s blog, The Sad Tale Of Octavia Smith Hatcher, had to do with RVing. This isn’t just an RV blog, it’s a blog about our lives. That includes things that happened to us and that we saw while we were on the road as fulltime RVers as well as things that have nothing at all to do with RVing, like today’s blog.

But back to yesterday’s story; those oddball bits of history that nobody ever hears about are the kind of things we sought out and found in our travels on the back roads and wrote about in the Gypsy Journal. Our thing was always that we didn’t care about Dollywood or Disney World, or any of the well-known tourist traps. We wanted to find the small towns with a character of their own, the quirky roadside attractions, oddball museums, and overlooked history that everybody else passes by without a clue that they even exist. And those are the things we continue to seek out.

Thought For The Day – The office Christmas party is a great opportunity to catch up with people you haven’t seen for twenty minutes.