He has been called the man who created the horror literary genre with his stories of murderers, madmen, people being buried alive, and mysterious women who return from the dead. Though Edgar Allan Poe is widely acknowledged as the inventor of the modern-day detective story and was an innovator in the science fiction genre, his fame rests on his tales of terror and the macabre, as well as on his haunting lyric poetry. And more than 165 years after his own death the works of Edgar Allan Poe are even more popular than they were when he was alive.

Born in Boston on January 19, 1809, Poe was the second of three children born to traveling actors David and Elizabeth Poe. In those days acting was a disreputable profession, and Poe seemed to be haunted by his parents all of his life. His father abandoned the family, and by the time he was three years old his mother had died, leaving his siblings and himself orphans. 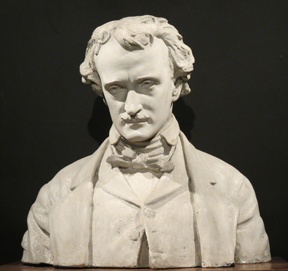 The children were taken in by different families and raised in Richmond, Virginia. Poe was raised by a wealthy tobacco merchant named John Allan and his wife Frances. While Mr. Allan hoped the boy would grow up to become a businessman, Poe dreamed of becoming a writer. By age of thirteen he had compiled enough poetry to publish a book, but the headmaster at his school advised his foster father not to allow him to do so.

Poe was a talented and intelligent boy who excelled at athletics but often had trouble fitting in with his classmates. One described him as being “imperious, and though of generous impulses, not steadily kind or even amiable.”

Poe left Richmond in 1826 to attend the University of Virginia. While there he did very well in his classes but always short of funds, he began gambling and soon found himself deep in debt and had to burn his furniture to keep warm during the winter.

Furious with his foster father for not giving him enough money to pay for his education and living expenses, Poe returned to Richmond only to discover that his fiancée, Elmira Royster, had become engaged to another man in Poe’s absence. Humiliated and heartbroken, Poe soon enlisted in the Army, but not before publishing his first book, Tamerlane, when he was only eighteen.


With the help of John Allan, Poe received an appointment to the United States Military Academy at West Point, but he only stayed a few months before being kicked out. Broke and in debt, Poe moved to Baltimore and lived with his aunt Maria Clemm. He soon fell in love with her young daughter, Virginia.

He continued to write, both poetry and short stories, and caught the attention of Thomas Willis White, owner and publisher of the Southern Literary Messenger, located in Richmond. White published many of Poe’s stories and eventually hired him as an assistant editor. Although he admired Poe’s literary talents, White was not happy with his intemperance and his harsh literary reviews. White once wrote that Poe only read books so he could ridicule their authors. Still, he gained national recognition for his work at the Messenger.

On May 15, 1836, the 27 year old Poe married his cousin Virginia in Richmond. She was only thirteen, which was legal as long as she had her father’s consent. However, her father was dead, so Poe falsely claimed that she was 21 in the marriage bond he filed in Richmond. By all accounts it was a happy union, and though money was tight, Poe hired tutors and music instructors for his young bride. Sadly, the marriage lasted only eleven years; Virginia died in 1847 of tuberculosis when she was just 24 years old.

Following Virginia’s death, a heartbroken Poe bounced around from New York City to Boston and back to Richmond, working as editor at a couple of different publications and writing and selling his poems and short stories to many of the magazines of the day, but never really achieving financial success. He became a champion for higher wages for writers as well as for an international copyright law.

The publication of one of his most beloved stories, The Raven, made Poe a household name. He was able to draw large crowds to his lectures, and to demand better pay for his work.

But with his growing success came growing criticism, and many of the authors he had besmirched in the past looked forward to his downfall. Indeed, even with his growing fame, Poe was on a downward spiral. There were rumors of alcohol and drug abuse, though these may have been unfounded or exaggerated by his enemies.

On a trip to Philadelphia, Poe stopped in Baltimore and disappeared for five days. He was eventually found in rapidly declining health and was sent to Washington College Hospital, where he died on October 7, 1849 at the age of forty. The exact cause of Poe’s death still remains a mystery.

Just as the often bizarre characters in his stories captured the public imagination, so, too, has Poe himself. Most see him as a morbid, mysterious figure tortured by his past and seemingly fated to die alone and bitter, but much of that is pure legend, fostered by Poe’s greatest literary rival, Rufus Griswold. Griswold hated Poe because of the scathing reviews of his own work that Poe had written, and after his death, he took every opportunity to defame his enemy.

Griswold wrote an obituary and later a memoir that portrayed the late author as an amoral drunkard given to womanizing, who had burned every bridge he ever crossed. Unfortunately for him it backfired, and today, while Poe’s name is a household word, Griswold is merely remembered as the author’s first biographer.


Today the Poe Museum, housed in the oldest home in Richmond, Virginia, honors the memory of the troubled author who brought the world such great works as The Tell-Tale Heart, The Murders in the Rue Morgue, The Cask of Amontillado, and the last complete poem he composed, Annabele Lee. 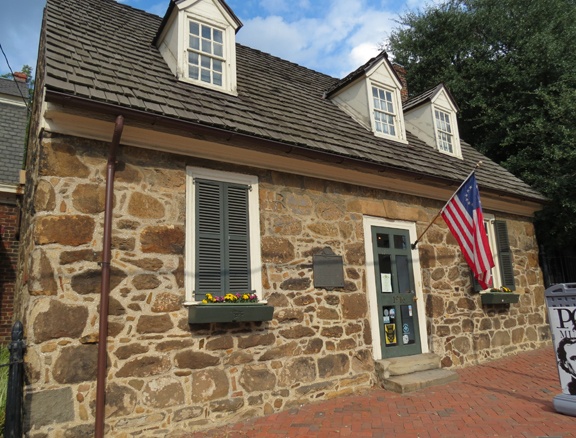 Though Poe never lived in the home, which dates back to around 1750 (none of the places where he lived in Richmond have survived), the museum has the largest collection of the famous author’s personal belongings and memorabilia in the world. Displays include many items from his life and examples of his many works. These include the bed he slept on as a boy while living with the Allans, the writing desk he used while working at the Southern Literary Messenger, complete with the chair that Thomas White is said to have cut the back from to encourage Poe to sit up straight, and the pair of Old Sheffield Plate candelabra under which he wrote The Bells. 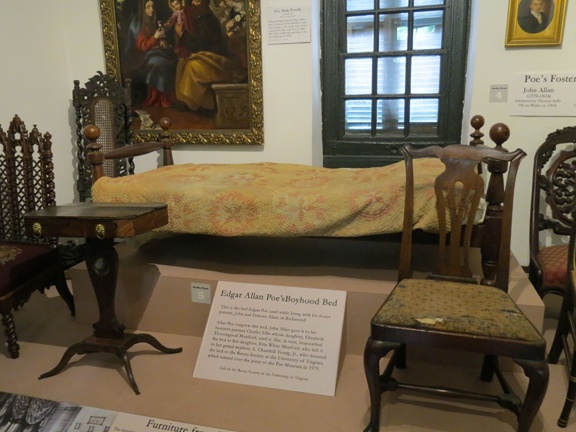 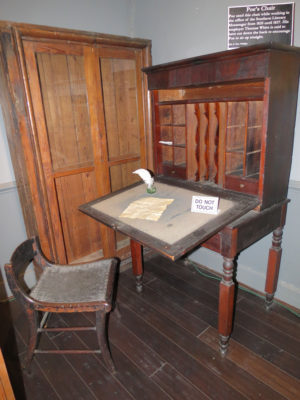 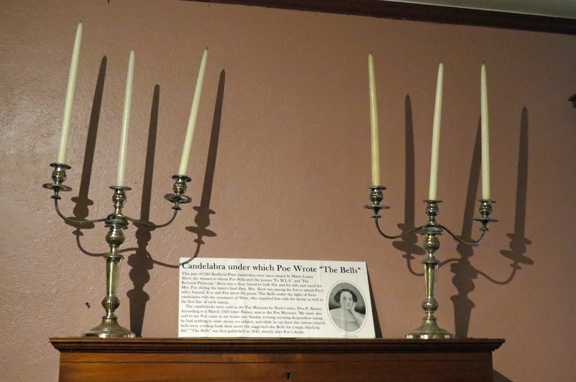 Other items in the museum’s collection include first editions of several of Poe’s poems and stories, a page said to be from one of his West Point textbooks, a small trinket box and mirror that belonged to Virginia Poe, and the author’s trunk, which he left behind in Richmond when he took his ill fated trip to Philadelphia. It contained most of Poe’s worldly possessions, which included some clothing, Virginia’s mirror, and some manuscripts. The key to the trunk was found in Poe’s pocket after his death, two weeks after leaving Richmond for the last time. 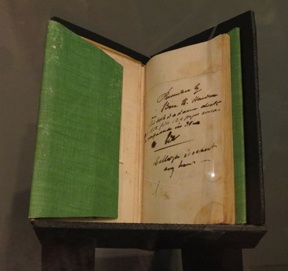 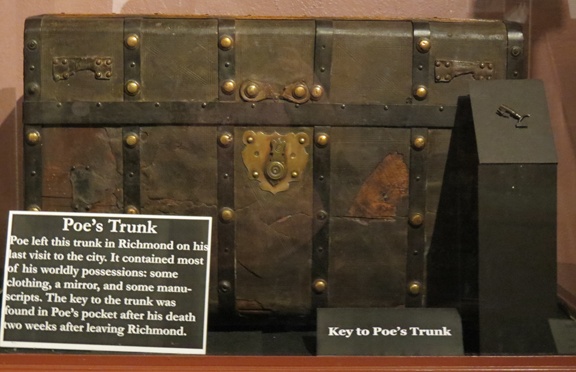 Located at 1914 -16 East Main Street in Richmond, the Poe Museum is a must stop for any Edgar Allan Poe fan, and for anyone interested in American literature and early nineteenth century Richmond, where Poe lived and worked.

The museum is open Tuesday – Saturday from 10 a.m. to 5 p.m. and Sunday from 11 a.m. to 5 p.m. Admission is $8 for adults and $6 for senior citizens and students. Besides its extensive collection of Edgar Allan Poe artifacts and memorabilia, the museum has a small but well stocked gift shop where visitors can purchase Poe’s books and souvenirs of their visit.

The streets in the area are not suited for RVs, and parking is limited to passenger vehicles, so leave your RV at one of the area campgrounds and drive your tow vehicle or dinghy when you visit. For more information on the Poe Museum, call (804) 648-5523 or visit their website at http://www.poemuseum.org.

Thought For The Day – Christmas is a baby shower that went totally overboard.

2 Responses to “He Created Horror”