Little did we know when we pulled into the Trees of Mystery, a popular roadside attraction on U.S. Highway 101 near Klamath, California, that we were going to discover an unexpected treasure! We originally stopped to grab a quick photo of the Paul Bunyan and Babe the Blue Ox statues and then go on our way. But that was before we discovered the impressive End of the Trail Museum inside the attraction’s main building!

The museum is the culmination of a dream that began more than 40 years ago, when Marylee Thompson became interested in the ancient and modern cultures of Native Americans. Making many trips, as far away as Arizona, Mrs. Thompson met and befriended hundreds of Native Americans and acquired an amazing collection of artifacts from Indian tribes nationwide. That collection is now on display in the End of the Trail Museum, and a part of Mrs. Thompson’s heart is in every item on display.

Mrs. Thompson often said that she believed the Native Americans invented the word “ingenuity”, by using whatever was available to them to make tools, clothing, and whatever else was needed. While modern civilization made it no longer necessary to hunt for food, or to make clothing from animal skins, or to weave baskets, it also meant that the Indian culture started to fade away. She became committed to preserving that culture for future generations. 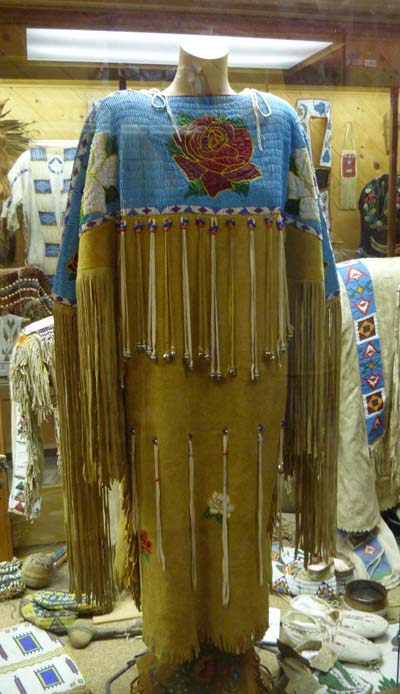 The museum is attached to the north end of the Trees of Mystery gift shop, and is one of the largest privately owned world class museums in existence. The museum is organized into six rooms of specific interest. The entrance and gallery are devoted to a collection of Native American baby carriers. Also on display here are many of the animals used by the tribes for food and raw materials for crafts, clothing, and shelter. 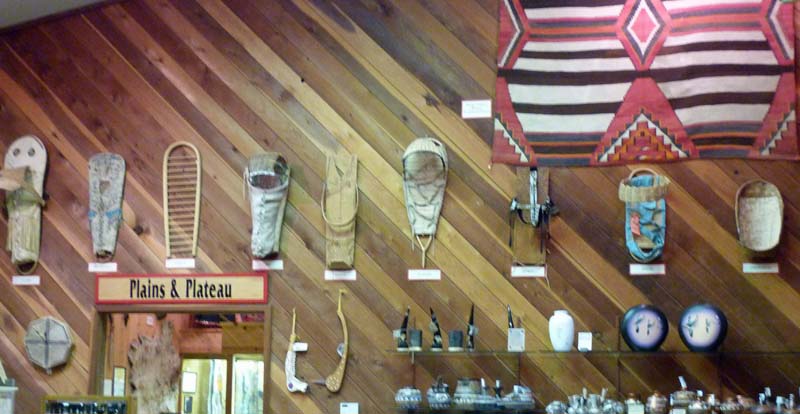 The other five rooms in the museum are organized by geographic area, rather than tribal affiliation. Each room has attractive displays of everything from traditional buckskin dresses and moccasins, to arrowheads, woven baskets, pottery, and more. Placards and signs explain what each item is and what it was used for. 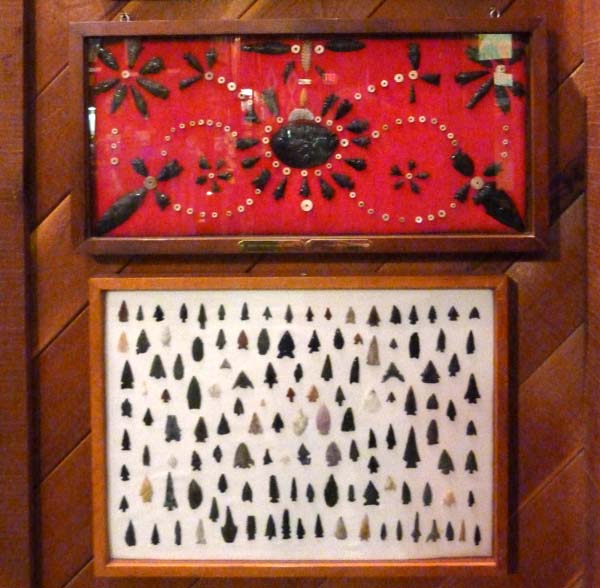 The Local Room is dedicated to the local Yurok, Karok, and Tolowa tribes. Many fine examples of basketry, bead work, and shell work can be found here, created by the local peoples, who were exceptional crafters


The Indians of the American Southwest were masters at living in the harsh deserts of their region, and the Southwest Room displays baskets, tools, beadwork, and Kachinas. 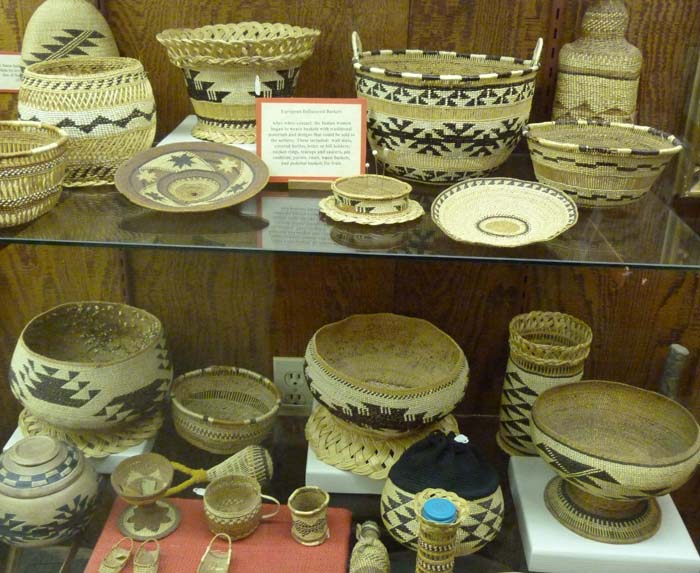 The Northwest Room is lined with the cedar that the tribes from that area found so many uses for in almost every part of their lives, from creating implements, storage boxes, lodges, longhouses, and even whaling boats.

The nomad tribes of the Great Plains made extensive use of the animals around them, from the mighty buffalo to the swift-footed antelope, to birds and fish. The Plains Room is a tribute to their lifestyle as they followed wild game on their annual migrations. 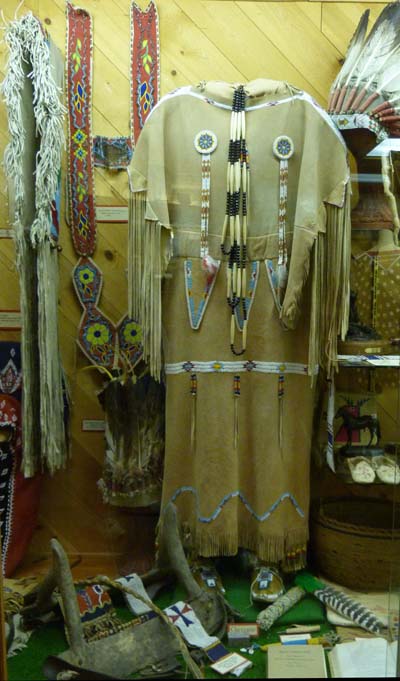 The California and the Great Basin Room covers the Indian tribes that lived between the Rocky Mountains and the Sierra Nevada range, an area which included the eastern arid borders of California. Due to the sparseness of this area, most of the waking hours of these inhabitants were spent in the search for food. Acorns, grubs, various insects, edible berries and small game were all part of their diet. This preoccupation with food gathering is reflected in the many baskets used by these people. Baskets were used for everything from storage to hats, from cooking pots to eating bowls. The patterns and weaving on the baskets displayed in this room are both intricate and varied. 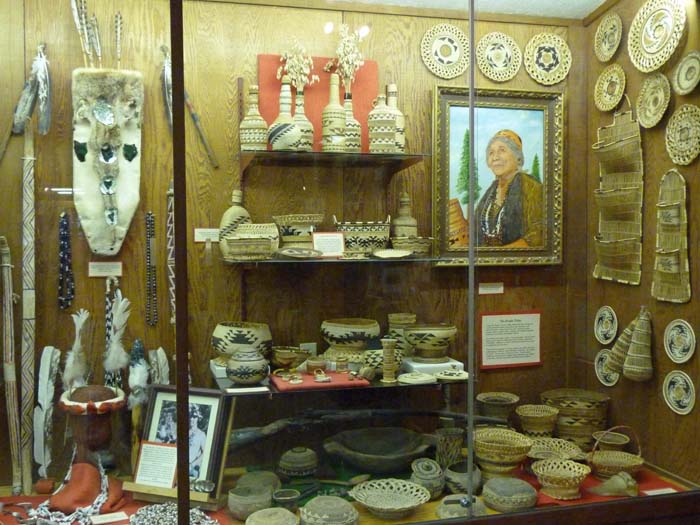 The museum also has a display of “Gold Tones,” created by Edward Sheriff Curtis, who spent 30 years traveling and photographing Native Americans before they became too exposed to the steadily advancing white culture. Traveling by mule, wagon, and horse, Curtis won the confidence and friendship of his Indian photo subjects.

The End of the Trail Museum has one of the finest collections of Native American items we have seen anywhere and it is well worth a stop on your next visit to California’s redwood country. 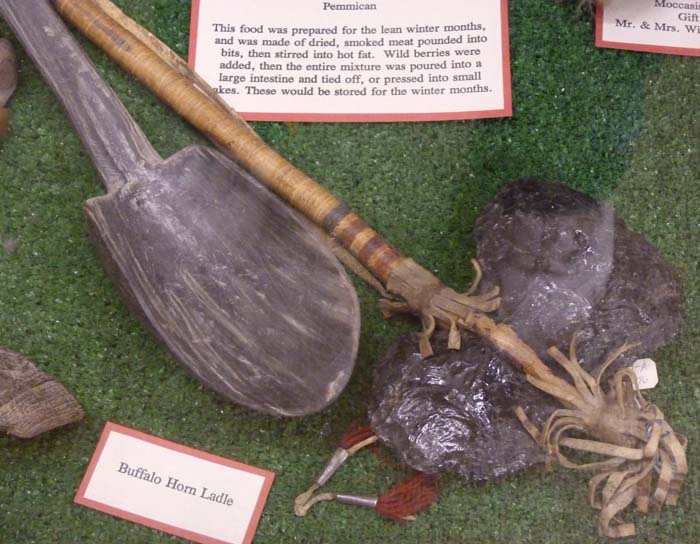 In addition to the gift shop and museum, the Trees of Mystery includes a groomed interpretive trail through the awe-inspiring redwoods. Part of the trail is devoted to the myth and mythology of Paul Bunyan, America’s larger-than-life logger from the turn of the century. The trail is open and maintained year-round. There is a shuttle to Sky Trail for those who cannot easily walk the trail.


The Trees of Mystery is located at 15500 North U.S. Highway 101, about 36 miles south of the Oregon border, in the center of the redwood forest, near the world famous Klamath River and the rugged Pacific Coast. Admission to the gift shop and museum are free, and the facility is handicapped accessible. The parking lot easily accommodated our 40 foot motorhome and tow car, but if it was a busy day, it might become necessary to unhook a dinghy. 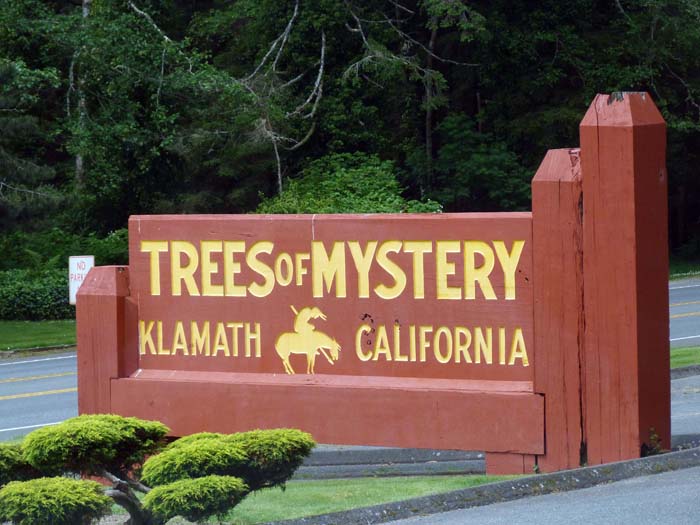 Thought For The Day – There is a great big world out there waiting to be loved by you.

2 Responses to “End of the Trail Museum”