Yesterday I crossed two things off of my bucket list at the same time. Don’t tell me I don’t know how to multitask!

I’ve caught lots of fish in my time; from docks, from boats, from shore, and a few years ago on an RV trip to Atlantic City, North Carolina, from a pier in the ocean. (That was something else I got to cross off of my bucket list.) But one of the things still on my bucket list was to catch a fish from a kayak.

While waiting for the second and third proofreaders to finish with my new book, we have some time to kill. So yesterday Terry and I paddled our Old Town Predator 13 kayaks across the Intracoastal Waterway and into a little cut-off called Jones Creek, which leads through a mangrove hammock and into the north end of the Mosquito Lagoon. For those who aren’t familiar with it, Mosquito Lagoon is considered by many to be the Redfish Capital of the World. Anglers come from all over to try their luck against these feisty fish, which are also known as red drum. Catching one of those was also on my bucket list.


The local fishermen tell me that if you get in the lagoon and fish the edges of the mangroves, you’ve got a good chance of hooking onto a redfish. So we found a little cut away in the shoreline and anchored our kayaks out from it, baited our hooks with live shrimp, and started casting. 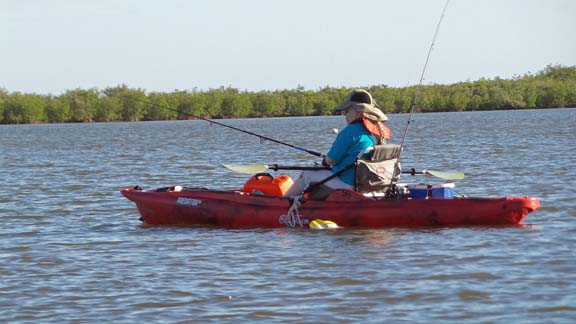 On my very first cast I hooked a small catfish, maybe eight inches long. Cross one thing off of my bucket list, I had now caught a fish from my kayak. It was not really big enough to make it worth keeping, so I put it back in the water, baited up again, and made another cast.

I don’t think my line was in the water more than a minute when I get a solid strike and reeled in my very first redfish. Cross that off my bucket list! What a beauty he was, and he gave a pretty good fight.

To ensure a healthy fish population for the future, there is a slot limit on them, and you can only keep redfish between 18 and 27 inches. This guy was only 14 inches long, so he went back into the water so he can grow a little bigger. Maybe he will still be there sometime when we come back. I had Terry hold it while I took a couple of pictures, before we released it. 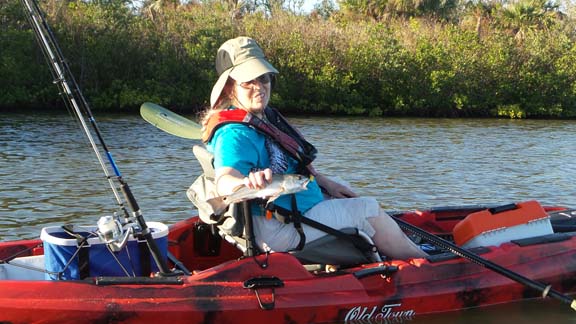 Meanwhile, Terry caught a catfish, another small one, and I was getting bites on just about every cast, although more of them got away than I caught. It’s nice to know that the local fish population dined very well on fresh shrimp, thanks to us.

The next time I got something and reeled in, it turned out to be a nice size blue crab. He was hanging onto that shrimp for all he was worth, but when I brought the line over the kayak he let go and dropped down into the front of it. That was one very unhappy crab! He kept clicking his claws and glaring at me, and since I couldn’t reach him to get him back out, I just kept an eye on him, hoping that he would stay on his end of the kayak while I stayed on my end.


And so it went. We spent close to three hours on the water, and by the time we were done, I had caught two redfish, three catfish, and two crabs. Miss Terry got another redfish, two catfish, a mangrove snapper, and two crabs of her own. None of them were big enough to keep, so they all went back into the water.

By the time we paddled back to shore the sun was starting to drop behind the trees, and we were both worn out from our fun day of kayak fishing. We are both looking forward to getting back out on the water again.

Besides having fun, we learned a couple of things. Mainly, that we have to get better organized. We basically just threw everything in the kayaks and took off paddling. There’s not a lot of room in one of them, and it seemed like the things we needed to use most were out of reach, while the things that we didn’t use at all were just in the way. So we will be working on refining that before our next fishing expedition.

Thought For The Day – Don’t blame the holidays, you were fat in August.

4 Responses to “A Twofer”