When Terry and I first got interested in kayaks many years ago we bought two Native Watercraft sit-on-tops. They were great boats and we really liked them, but after we traded in the Ford van we had then on the Explorer, we had to put them on the roof of the SUV. That became a hassle, and really cut down on our fuel mileage.

Then our friends Tim and Crystal Ryerson from InflatableBoats4Less convinced us to try Sea Eagle inflatable kayaks and we soon owned a pair of them, me a PaddleSki 435 and Terry a 385 Fast Track. We love them! They are sturdy, very stable in the water, and storing them in one of the bays of the motorhome was quick and easy. So we sold the hard kayaks and for the next few years we paddled our Sea Eagles from the Gulf of Mexico to lakes and rivers in the Midwest, and all over Central Florida.

But there are a lot of oyster beds in the water near our home here on Florida’s Intercoastal Waterway, and those darned oyster shells are really sharp. We talked to a man who sustained a serious foot injury when he stepped on some oyster shells and they cut right through one of the Crocs he was wearing. So while the Sea Eagles are good in the open water, we have been hesitant to take them into the mangroves and shallows where some of the best fishing is. We decided to start looking for hard kayaks again for the times when we want to get into the areas where the oyster beds are all over the place.

Terry and I starting researching fishing kayaks and became interested in the Old Town Predator 13s. They are a little wider than most kayaks, very stable, and have one of the best seats of any boat around. There is an excellent family owned shop in nearby Titusville called Kayaks By Bo that carries them, so a while back we stopped in to check it out. The owners, Tom and Lyn Altif and their son Jason, are super friendly people who don’t just want to sell you a boat and wish you well; they take the time to help you select the right boat for you – the one that fits your paddling style, your interests, and your budget.


They invited us to test paddle a few different boats to get a feel for them and see what might work for us. So a couple of days later we met Jason at a kayak launch in Titusville and tried out three or four different boats. After paddling all of them, Terry and I were both convinced that the Predator 13s were what we wanted.

Our friend Jim Lewis, on the other hand, opted for an Old Town Predator PDL, a slightly wider version of the boats we chose, which also has foot pedals to propel it through the water. No, those aren’t training wheel under it, it’s a kayak caddy used to help move the boats around on dry land. They are heavy boats, which is part of what makes them so stable. 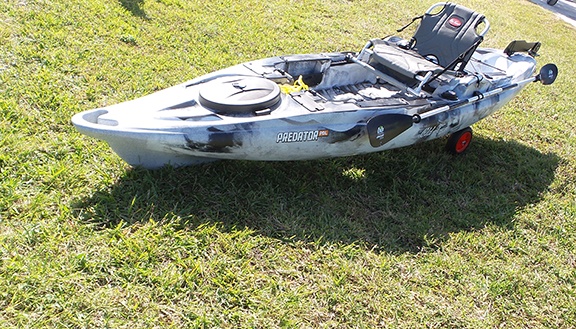 We got a heck of a deal on all three boats and brought them home. Terry’s is the red one and mine is the green. 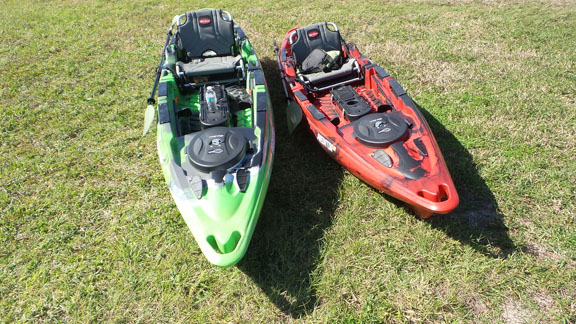 We were eager to get them out on the water but the wind was so bad for the last few days that there was no way we were going to do that. Yesterday was just perfect, no wind and the temperature was around 78°. It just doesn’t get much better than that. It was time.

We launched the kayaks at a spot near our fishing pier and paddled a short distance across the Intercoastal Waterway and into the mangrove hammocks. They sure are smooth! When a motorboat when zipping down the main channel, completely ignoring the no wake zone due to all the manatee in the water here, the kayaks rode through the wake he threw up just fine.

This is the northern end of the famous Mosquito Lagoon, which has some of the best fishing in the world, and we paddled around for two or three hours. All three of us agreed that the next time we take the kayaks out, we’re going to bring some fishing gear with us!

To make the day even better, several of the local dolphins were playing in the water near us, and we saw one manatee.


Here is Jim, just peddling away. Not only is his PDL easy to maneuver forward or backward, it’s really fast. I found that out when I challenged him to a short race. I was paddling as fast as I could while he was just sitting back relaxing and never broke a sweat. And he was still at least three boat lengths ahead of me when he reached the crab trap buoy we were using as our finish line! 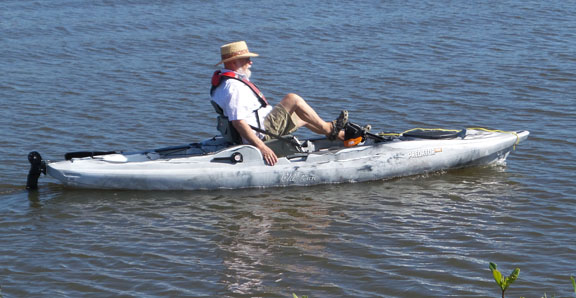 Jim got a couple of pictures of Terry and I, this one soon after we launched, near our fishing pier. 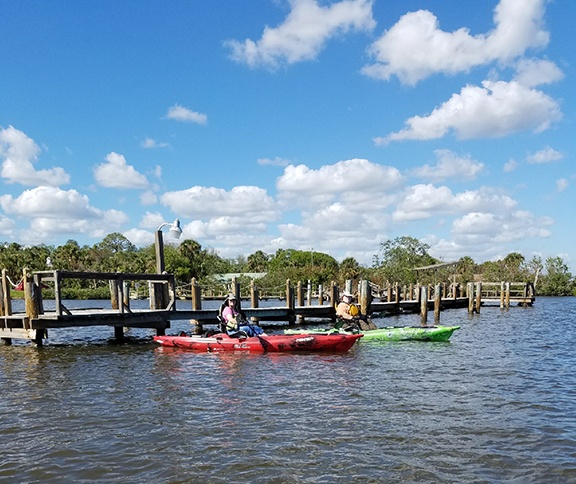 And this one was taken once we got into the mangroves. 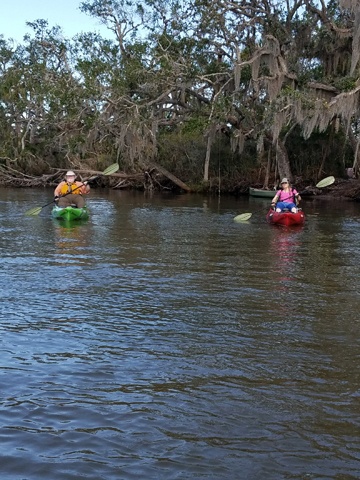 The water can be very shallow back in there, and a few times Jim had to pull his pedal unit up and use his paddle. But he said even then it was no problem.

We will keep our Sea Eagles for when we want to just be out in the open water or when company visits, and I love my 16 foot center console Key Largo fishing boat. But the kayaks are perfect for getting into the mangroves and shallows where the big red fish live. Hopefully I’ll get to latch onto one of them before too much longer.

If you are anywhere on the central coast of Florida and are looking for a kayak, I promise you that you won’t find anybody who will treat you better than the nice folks at Kayaks By Bo. When you do business with them you’re not just a customer, you become part of the family.

Today is your last chance to enter our Free Drawing for an audiobook of my friend Ken Rossignol’s Pirate Trials: Famous Murderous Pirates Book Series: THE LIVES AND ADVENTURES of FAMOUS and SUNDRY PIRATES. To enter, all you have to do is click on this Free Drawing link or the tab at the top of this page and enter your name in the comments section at the bottom of that page (not this one). Only one entry per person per drawing please, and you must enter with your real name. To prevent spam or multiple entries, the names of cartoon or movie characters are not allowed. The winner will be drawn this evening.