Most of my time lately has been spent researching and writing, and I am just a little over 30,000 words into my newest book, Big Lake Snowdaze. And as so often happens when I’m working on a book, the story is going off in a direction I did not see coming. I think it’s going to change the entire ending from what I first visualized. I love it when that happens because it’s like I’m reading the book for the first time as I write it. More often than not, by the time I get to the last page of the manuscript, I’m completely surprised to find out who the bad guy (or girl) was.

While I was doing that, Miss Terry was getting frustrated dealing with medical offices and insurance issues. She’s been trying to get set up with a primary care provider and has called doctors’ offices from Titusville to Daytona Beach, and either they are not taking on new patients, or they don’t accept Medicare, or they say they’ll call her back and they don’t. I think I got into the wrong industry years ago, I should have gone to medical school. Actually, as much time as I spent playing doctor when I was a little kid, I probably would have graduated with honors.


Good news for fans of audiobooks! A while back I ended my agreement with the person who narrated the first five audiobooks in the Big Lake series and I’ve been looking for a new narrator to replace him. Yesterday I reached an agreement with Frank Clem to do the rest of the Big Lake series. Frank also narrates all of my friend George Wier’s audiobooks. And when he’s not doing that, he’s an accomplished actor who has appeared in movies including Austin Powers: The Spy Who Shagged Me, The Lost City Of Z, and Jurassic Park III, as well as many TV appearances on popular shows like Monk, ER, Malcolm In The Middle, Jag, Third Rock From The Sun, CSI: Crime Scene Investigation, How I Met Your Mother, American Body Shop, and The Bold And The Beautiful. Frank is starting work on the audiobook of Big Lake Burning now, and it should be out in early January.


As for the blog’s title, one of the most popular features in the Gypsy Journal was always the funny signs that we have spotted in our travels or that other RVers have sent us. I’ve still got a ton of them, and I thought I would share one with you now and then. Some of them are pretty unbelievable and you wonder how people got away with posting something like that. Others show that kids really need to pay more attention in spelling class in school. And some just have you wondering what were they thinking? Like this one. If you can figure out where to turn here, you’re a better driver than I am. 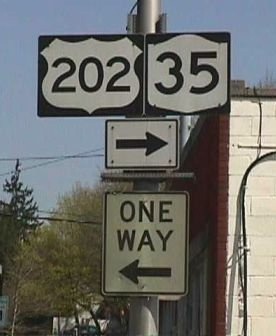 Thought For The Day – It is not the strongest of the species that survive, nor the most intelligent, but rather the one most responsive to change.

4 Responses to “Let’s Try Something New”