Yesterday was a busy day for us. I had a 2 PM appointment at the dealership in Daytona Beach where we bought our Chrysler Pacifica back in June for two recalls. One was to download a change in the computer software to fix a flaw in a sending unit, and the other was to replace a seatbelt connector in one of the rear seats.

They made the appointment two weeks ago, then called Tuesday afternoon to tell me that the part for the seatbelt is on a long back order and it may be months before they get it in. I’m sure glad we don’t haul a bunch of kids around and need those seats in the back! They asked if I wanted to delay the appointment for the software upgrade until the seatbelt part came in, but since they have no idea when that might be I told them no, we would be there because there’s no use putting it off. In the letter I got from Chrysler, it said it needed to be done immediately, so why would I want to wait months?

I have to say that while the sales process went well and we got a good deal on the van, l am not impressed with the service at Daytona Dodge Chrysler Jeep Ram. When we bought the vehicle, we were told that it had electronic memory seating so that either Terry or I could just push a button and it would return to our individual positions for height, forward or backward movement, and lumbar support. It’s an option we have on our Ford Explorer and really like. The van has so many bells and whistles on it that it was only after we had it home for a day or two that we realized it did not have that option. I called the salesman and he told me he would talk to the service department and make sure they got us in immediately to have it installed. That was in early June. I’ve called several times, and stopped in three times, and every time I do I have to start from square one. Everybody remembers their promise to resolve the issue, but then they start passing the buck, each one blaming the next person for dropping the ball. I don’t care who dropped the damn ball, pick it up and take care of business!


It took about an hour for the software upgrade to be done, and when we left the dealership we went to Dave’s Darts, a local dart shop. A year or so ago when our friend Jim Lewis got us hooked on playing darts, we bought a Unicorn dartboard. It wasn’t very expensive, and it served us well and gave us untold hours of recreation. But we used it so much that it was beat to death and many times darts would bounce right back out because the bristles it is composed of had softened and spread so much. So we bought a new board yesterday, a JMI Bandit, which is supposed to be a few steps up from the board we have been using. While we were at the store we also played with some different darts, and even experimented with a blow gun. Now that was fun! 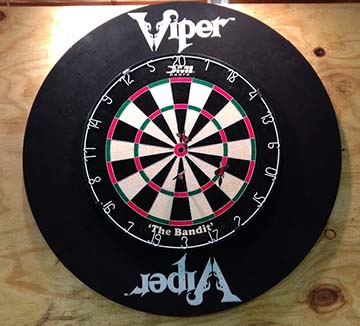 With that out of the way, we made a few other stops, then went to the Chinese buffet for dinner. It’s been a while since we’ve been there, and it was really good.

Back at home we broke in the new dartboard, and I’m proud to say I had no trouble at all adapting to it, which is to say that I threw just as bad as I always do and lost every game.


It’s Thursday, so it’s time for a new Free Drawing. This week’s prize is an audiobook of Big Lake, the first book in my Big Lake mystery series, and the one that launched my career as a fiction author. To enter, all you have to do is click on this Free Drawing link or the tab at the top of this page and enter your name in the comments section at the bottom of that page (not this one). Only one entry per person per drawing please, and you must enter with your real name. To prevent spam or multiple entries, the names of cartoon or movie characters are not allowed. The winner will be drawn Sunday evening.

Thought For The Day – Swallow your pride. It isn’t fattening.

4 Responses to “A Busy Daytona Day”