Nick's Blog » The Case Of The Exploding Air Conditioner

With all the paperwork signed for putting our Winnebago motorhome on consignment at PPL Motorhomes in Houston, we were ready to get out of Dodge. Well, at least out of Houston.


The directions we had been given to come to PPL had taken us into town on Interstate10 to the Interstate 610 Loop and then south and west. Even on Sunday there had been a lot of traffic that way, which I really was not looking forward to dealing with on midday Monday. But my buddy Greg White had told me about Beltway 8, which was a toll road with an entrance very close to the dealership. He said that there would be less traffic on that route, but it would cost us a few dollars in tolls. No problem, I’d pay just about anything to avoid as much Houston traffic as I can.

It was a great route, and Greg was right, there was not much traffic at all. We made good time, only slowing down for the occasional tollbooth, and before we knew it we were on Interstate 10 again, on the far east side of the Houston metropolitan area.

We made a quick stop at the Buc-ee’s in Baytown for gas and grabbed a couple of sandwiches, which we ate in the Explorer. Then we were back on the road again. We planned to make a slower trip back home, stopping at a few places we wanted to see along the way. But I didn’t know we would be stopping so soon!

Just as we were leaving Orange and were almost to the Louisiana border when we heard a bang followed by a rattling noise. At first we thought it was a truck passing us that had a load of steel on it, but then there was a loud hissing sound like air being released under pressure. At the same time, the air conditioner, which had been putting out cold air, suddenly began pumping out hot air. Rut roh!


I checked all the gauges and everything looked good, so I told Terry to do a Google search for auto air-conditioning shops around Lake Charles, Louisiana, which was about 40 miles down the road. As it turned out, she found a place called Clyde’s Automotive & Air Conditioning in Sulfur, which was only about 30 miles away. Terry called to see if they could take a look at the Explorer and they said to bring it in and they would do their best to work us in.

When I was a kid we didn’t have air conditioning in our cars and I remember traveling all over the country with the windows rolled down. Trust me, on a hot summer day in Louisiana, the good old days weren’t all that great!

When we got to Clyde’s the owner immediately took a look at things and tried to recharge the system. But the Freon was coming out as quickly as he was trying to put it in. That’s not a good thing. There were no lines broken anywhere, but when somebody got underneath to take a look he said the side of the air conditioner compressor had exploded. And when he said exploded, that’s exactly what he meant. 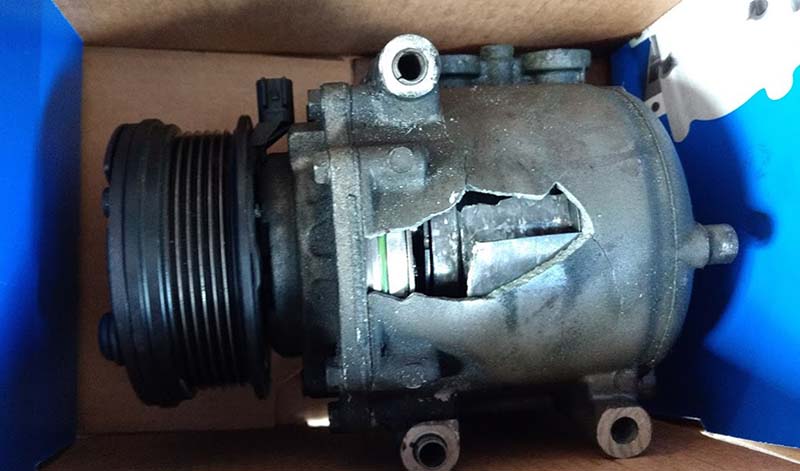 Clyde, who runs the shop with his wife and son, said in over 30 years in business he had seen maybe two or three compressors that had done this. As to what caused it, it’s hard to say. The Explorer is a 2005 and I’m pretty sure it was the original compressor, so maybe it was just metal fatigue.

Clyde said he could replace it, but it was already after 3 PM and he didn’t think he could finish the job that day. No problem, his wife Jan took us to a nearby hotel where we spent the night, and then the next morning about 10:30 she came back and picked us up. They had installed the new compressor and taken it for a test drive, and it was working fine. It was just one of those speed bumps on the road of life. We paid our bill and were back on the road within a half hour or so, riding in cool comfort again. If you are ever in southwest Louisiana and need a shop you can trust, you can’t do any better than Clyde’s.

Thought For The Day – Obstacles are those frightful things you see when you take your eyes off the goal. – Hannah More

5 Responses to “The Case Of The Exploding Air Conditioner”