Note: This story is from a 2009 issue of the Gypsy Journal.

We love getting out on the back roads and exploring small town America. We like to find an RV park to use as a base and make day trips throughout the region, poking around in the hidden corners and small towns that get bypassed by the superslab.


One of our favorite states to explore is Missouri, which offers a lifetime of opportunities to discover beautiful lakes, farm country, rolling hills, caves, forests, and friendly people in delightful small towns.

We have enjoyed all of Missouri, from the Ozarks and music halls of Branson to the Civil War battlefields that dot the state, but our favorite part of the Show Me State is the 150 or so meandering miles along the Mississippi River from Saint Louis north to the Iowa state line. Here you will find charming small towns, beautiful Victorian homes, boats pushing long strings of barges, riverboats, and even a bald eagle sanctuary.

On one of our trips to Missouri we spent some time exploring the area between the picturesque small river town of Louisiana and historic Hannibal, made famous by author Mark Twain in his Tom Sawyer and Huck Finn stories. 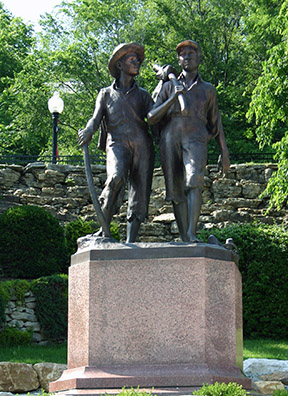 Settlers first came into the area around present-day Louisiana, Missouri about 1810, and by the War of 1812, a small stockade named Buffalo Fort was established to protect 25 pioneer families from marauding Indians whom the British were encouraging to go on the warpath. Several cabins were raided and atrocities carried out during this terrible time. In one incident, a woman and her nine children were killed and scalped when Indians attacked their farm.

Louisiana quickly became an important stop for riverboats, and it was a prosperous town in the glory days of the sternwheeler. Many riverboat captains lived in Louisiana and built beautiful homes that still grace the community. Another important industry in Louisiana was, and still is, the nursery business. The Delicious apple was developed here at the Stark Nursery, which is still a major employer.

At one time Louisiana was home to tool, button, glove, and tobacco factories, and had thirteen hotels. Before a bridge was built, ferries operated 24 hours a day carrying passengers across the river. Over 20 murals adorn the sides of buildings in Louisiana, telling the history of the community and the region.

Louisiana’s small downtown is a picture postcard of handsome old brick and stone buildings, and while it is not as busy as it once was, there is still a lot going on. People enjoy great meals and desserts at the Eagle’s Nest Restaurant, and just around the corner is the beautiful old stone Carnegie Library, built in 1905. 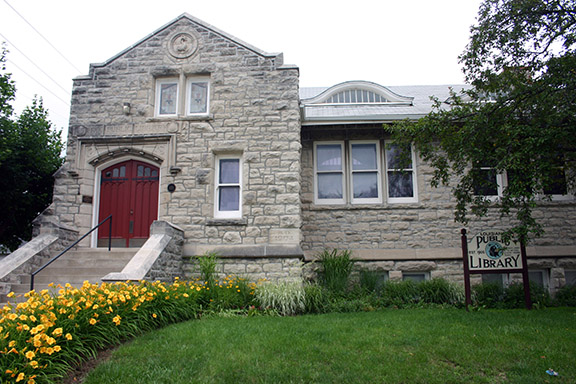 A few miles north of Louisiana on State Route 79, we stumbled upon the ghost town of Ilasco, once a bustling cement producing community. Founded in 1903, Ilasco was home to some 3,000 immigrants from eastern Europe who were brought in to work at the Atlas Portland Cement Company plant. The name Ilasco came from the components necessary to manufacture cement – iron, lime, alumina, silica, coal and oxygen. 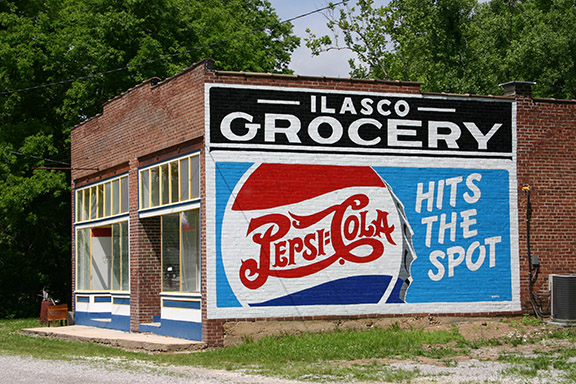 Ilasco grew into a sizeable town, populated by Polish, Slavic, Hungarian, and Italian immigrants who were willing to work hard for minimum wages. At one time the town had eight saloons, and with them came occasional troubles as drunken brawls erupted. With no jail in Ilasco, the constable had to take anyone he arrested to the county jail in New London.


After one too many prisoners escaped on their way to jail, it was decided that Ilasco needed a jail of its own. The Paulery Jail Building Company was hired to construct a jail, which opened on Mother’s Day, 1910. The sturdy two room escape proof building could accommodate eight prisoners and still stands today, though it has not held a prisoner since 1935. During Prohibition, bootlegging was a busy industry in Ilasco and many men spent time locked inside. 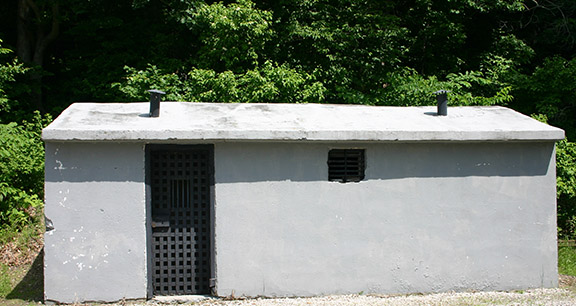 In 1910, a strike broke out at the cement plant and turned violent when workers armed themselves with clubs and demanded higher wages and better working conditions. The hostilities lasted four days, until the state militia was called in to crush the strikers.

By 1963, the cement plant had closed and Ilasco was almost abandoned. Today all that remains are a couple of churches that still serve the farm families that live nearby, an abandoned grocery store, and the cement jail.

Five miles north of Ilasco, Hannibal is a busy and friendly community, as it has been since the days of the riverboats. Mark Twain put his boyhood hometown on the map, and Hannibal remembers its favorite son with museums, statues, and several businesses named after him. 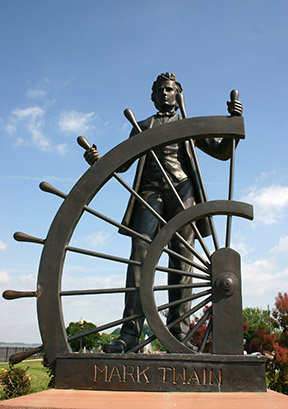 Many of the buildings in Hannibal’s Historic District, along the Mississippi River, were built in the 1800s and still look much the same as they did when young Samuel Clemens, who grew up to become Mark Twain, lived here. Most of the old downtown is listed in the National Register of Historic Places. 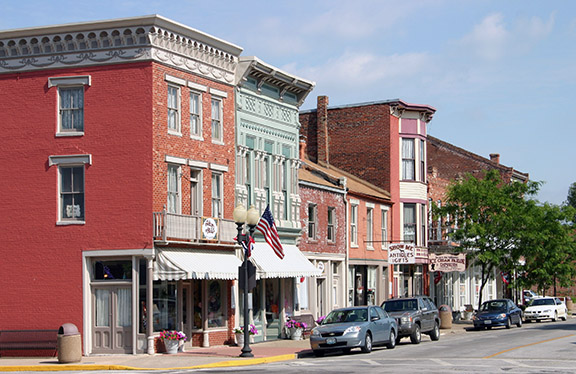 Over 350,000 tourists come to Hannibal every year to experience life on the Mississippi, and the focal point of the town’s tourism industry is the Mark Twain Boyhood Home, built by the future author’s father in 1844. The home has been carefully restored, complete with the famous whitewash fence. 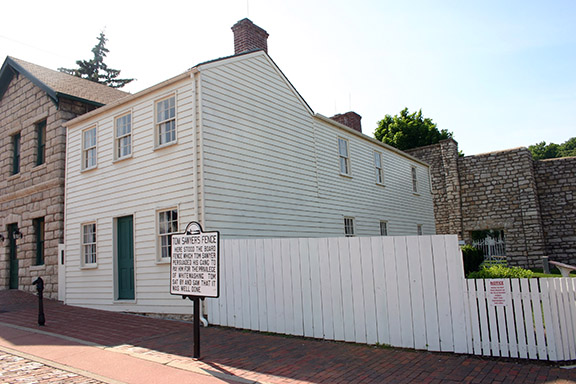 The house is part of a museum complex that includes an interpretive center, the Clemens’ Law Office, the Becky Thatcher House, Grant’s Drug Store, and the Mark Twain Museum Gallery. Besides Mark Twain items, the Museum Gallery has an excellent collection of fifteen original Norman Rockwell paintings. 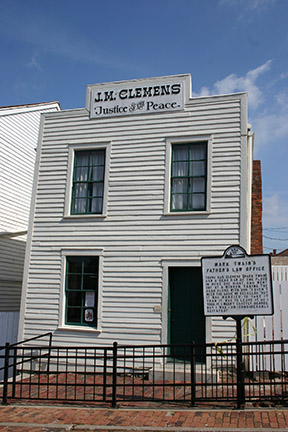 Hannibal was also the home of Molly Tobin, who grew up, moved to Colorado, and married a mining engineer named J.J. Brown, who made a fortune in gold mining. In 1912, Molly and her daughter Helen were touring Europe when she got word that her grandson was ill back in Colorado. This was before air travel, so Molly booked last minute passage on the H.M.S. Titanic. When the ship struck an iceberg and sank, Molly helped organize survivors into lifeboats and earned forever the title of the Unsinkable Molly Brown. The small house where she was born in Hannibal has been restored and is open for tours.

No visit to Hannibal is complete without a ride on the Mark Twain riverboat. Built in 1964, the 120 foot long boat can carry as many as 400 passengers on cruises on the Mississippi River, and is wheelchair accessible. The Mark Twain offers one hour narrated cruises that explore the Hannibal waterfront and local history, as well as dinner cruises and Saturday night jazz cruises. 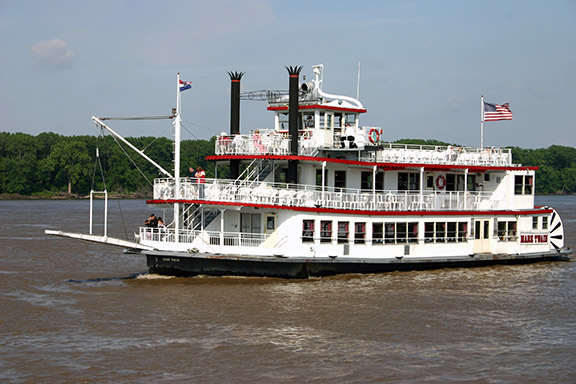 There are several RV parks in and around Hannibal, and the most popular is probably Mark Twain Cave and Campground, which features 99 campsites and its own cave, which visitors can explore on a guided tour.

As you can see, there is a lot to see and do in this region, and there is not room in this story to cover all of the delights waiting for you to discover along these Missouri back roads.

One Response to “Missouri Back Roads”