Occasionally I have RV salesmen or RV dealers take me to task because I frequently say that if their lips are moving, they are lying. No, that’s not true for everybody in the business, and maybe it’s not even true for the majority of them. But it’s been my experience that it’s more common than they would want you to believe.


Why does one have to lie to make a sale? If you have a good product at a fair price, and you believe in it, there’s no need for that. Yet I have seen it myself over and over, and I hear about it on a regular basis.

Our first experience with this was early on, when a hotshot salesman tried to convince us that our half ton Ford F-150 pickup truck with a six cylinder engine would have no problem at all pulling the 40 foot triple slide fifth wheel trailer he was trying to sell us through the mountains out west. Obviously he didn’t give a damn about our safety, only in making a sale.

Back when we were first looking for a diesel pusher to replace our old MCI bus conversion, fuel prices and interest rates were high and RV sales were at an all-time low. There were thousands of rigs gathering dust on dealers’ lots all over the country. Terry and I were in Mesa, Arizona in the early summer, which would be one of the slowest sales periods in an already slow market. We stopped at one dealership to look at a motorhome that caught our eye, and before he even opened the door to let us inside the salesman was telling us how we had to make a deal that day because RVs were literally flying off the lot. They could not keep them in stock. That told me all I needed to know and we were done right there and then.

Another time, I questioned the salesman about why the toilet paper holder in the second bathroom of a high dollar diesel pusher was situated in such a way that it would bang into anyone’s leg when they sat down. He told me that didn’t matter because nobody ever uses the bathrooms in their RVs anyhow. That’s what highway rest areas are for. Really? Then why did the motorhome have two bathrooms, if nobody ever uses them? He didn’t have an answer for me, except to say “studies show” that less than 10% of RVers ever use their bathrooms.

One of our longtime blog readers told me that while shopping for a new rig, an upgrade from the 36 foot gas motorhome they have now, a salesman told them that new federal regulations are going to require anybody with a diesel rig to have a special license, just like commercial truckers have to have. You guessed it, there wasn’t a diesel rig for sale on his lot.

That kind of reminds me of when Terry and I were looking for TVs for our house last year. A salesman at Best Buy in Daytona Beach warned us not to buy anything except a 4K TV because after January 1, 2017, all of the cable companies and satellite companies were switching exclusively to 4K, and any TVs that weren’t 4K would be obsolete. I asked him if he really believed that the cable and satellite companies were going to just throw away millions of customers who could no longer receive their signals. He said yes, they were forcing people to upgrade.

But it’s not just the guy selling new high-end RVs who will lie to you. A very lovely lady named Janice, with whom I exchange emails with on almost a daily basis, has been looking for a small Class C, or maybe even a B van, that she can use to go somewhere warm during the winter. She said she looked at a used RV at a dealership recently that had very noticeable bubbles on the sides of the gelcoat from delamination. She told the salesman she wasn’t interested in that one at all because of its obvious problems, and the sales manager came out to tell her that it wasn’t delamination, it was just “swelling caused by the changes in temperature” since they recently had a cold front move through the area. He promised that once the weather stabilized, the swelling would go away.


No, not every RV salesman is a liar. I know that. But enough of them are that it’s better to be cautious and take everything they say with a very large grain of salt rather than to just trust them at their word. You will be better off in the long run.

It’s Thursday, so it’s time for a new Free Drawing. This week’s prize is a Gold Rush Romances Box Set by my friend Mona Ingram. With over 100 5-Star reviews, Book One of this series has captured the imagination of readers who enjoy romances about strong women. Set in the San Francisco Gold Rush era, each book tells the story of a woman determined to make her own way in this exciting, sometimes dangerous time. To enter, all you have to do is click on this Free Drawing link or the tab at the top of this page and enter your name in the comments section at the bottom of that page (not this one). Only one entry per person per drawing please, and you must enter with your real name. To prevent spam or multiple entries, the names of cartoon or movie characters are not allowed. The winner will be drawn Sunday evening. 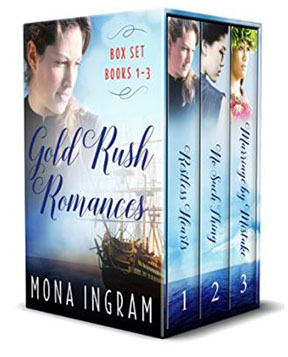 Thought For The Day – Difficult roads often lead us to beautiful destinations.

5 Responses to “Lies Your RV Dealer Told You”