The Dalton brothers were one of the most infamous outlaw gangs of the Old West, and today visitors to the friendly little town of Meade, Kansas can walk in their footprints at the Dalton Gang Hideout.


Born on the wild frontier of the high plains, the Daltons grew up among cowboys, outlaws, gunslingers, Indians, and horse thieves. Early in their adult lives the brothers worked as cowboys and lawmen. Frank Dalton was a United States Deputy Marshal assigned to Fort Smith, Arkansas serving under Judge Isaac Parker, known as the “hanging judge.” His brother Grat Dalton often served in Frank’s posse when chasing outlaws in Indian Territory, now present day Oklahoma. Frank Dalton was killed in a gun battle with whiskey runners in Indian Territory in 1887. After Frank’s death, Grat Dalton was given his brother’s job, and his brothers Bob and Emmett joined his posse.

Somewhere along the line, the Dalton brothers crossed the line between lawmen and criminals, and they were accused of horse stealing in Indian Territory. Grat and Bob, along with younger brother Emmett, were involved in several train robberies in Indian Territory and in California, where they fled for a time to escape pursuing lawmen.

Eva Dalton Whipple, sister to the infamous Dalton Gang, lived in Meade with her husband, a well known merchant named J.N. Whipple. They lived in a small house built on a hill on the south side of town. Legend has it that the Dalton brothers were friendly with several people in Meade, and often sold stolen horses locally. It is said that because of this, the outlaw brothers never robbed the bank in Meade. 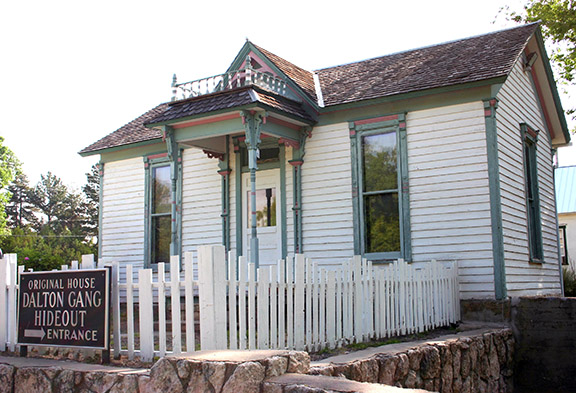 Eva and her husband left Meade suddenly in early 1892, and not much is known of their lives after that. They abandoned their home and business, and eventually the house was sold at a Sheriff’s foreclosure sale.

The next occupants of the home were the H.G. Marshall family, and soon after they moved in, they discovered a tunnel leading from the house to the barn down the hill. The tunnel entrance inside the house was concealed by a small closet beneath a stairwell. From the house the tunnel led to a small feed room in the barn, which hid the tunnel entrance. One of the Marshall family daughters reported that some unknown horseback riders once rode up the canyon to the barn, left their horses in the barn and entered the house through the tunnel. When the surprised riders realized another family now lived in the house, they fled back through the tunnel and disappeared. 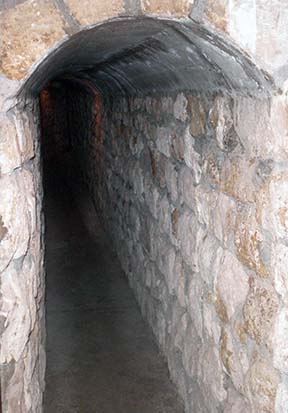 The Dalton Gang met their fate on October 5, 1892, when Grat, Bob, and Emmett, along with gang members Bill Power and Dick Broadwell, rode into Coffeyville, Kansas, their old hometown. They planned to rob the town’s two banks simultaneously. Nobody had ever pulled off a double bank robbery, so they hoped to not only make a big score, but also to make history. They hitched their horses in an alley and three of the outlaws entered the C.M. Condon & Company bank, while the other two stormed into the First National Bank.

Though they wore wigs and fake beards, somebody recognized the Daltons and the word spread quickly. The townspeople began arming themselves with rifles and shotguns from the hardware store.


When the outlaws stepped out of the banks, a wild gun battle broke out that left four Coffeyville citizens and four of the bandits dead. Emmett Dalton managed to mount his horse, despite being shot in the arm, leg, and groin. Instead of fleeing, he rode to where his brother Bob lay dying in the alley and tried to pull him onto his horse with him. One of the townsmen emptied both barrels of a shotgun into Emmett’s back and knocked him out of the saddle.

Amazingly, Emmett Dalton survived his wounds. He eventually recovered from his injuries and was sentenced to life in prison at the Kansas State Penitentiary. In 1907, after serving fourteen years in prison, Emmett was paroled after giving Governor E. W. Hoch his solemn vow not to return to his life of crime. He was true to his word, and settled in Tulsa, Oklahoma, where he was employed as a special police officer. Emmett Dalton later was a consultant to movie producers making films about the gang’s lives. He died in Hollywood, California on July 13, 1937.

Today the old home where Eva Dalton Whipple lived in Meade, Kansas has been restored and is open to visitors as the Dalton Gang Hideout. Visitors can tour a small museum with displays on local history, including old firearms, barbed wire, and even a two-headed calf.

The tunnel still leads between the barn and the house, which has been furnished with period items, including a table that belonged to another Dalton sister, Leona. The tunnel is lighted and an adult can walk through it, just as the outlaws did in days long past.

The old barn, now the entrance to the house and museum, includes a small gift shop with souvenirs and books on the history of the Old West. If you are fortunate enough to visit when museum manager Marc Ferguson is on duty, you are in for a treat, because Marc is a great storyteller and loves to share his knowledge of the Daltons and other old time outlaws and lawmen.

The Dalton Gang Hideout is open Monday through Saturday from 9 a.m. to 5 p.m., and Sunday from 1 to 5 p.m. There is a nominal admission charge. The Hideout is located four blocks south of U.S. Highway Hwy 54 on Pearlette Street in Meade. Unfortunately, while the gift shop is handicapped accessible, the small museum is upstairs and there is no elevator. 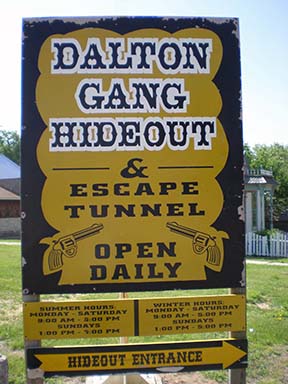 There is room to park an RV on the street, or you can leave your rig at the Meade City Park, which allows free overnight parking, and drive your tow vehicle to the museum. For more information on the Dalton Gang Hideout, call (620) 873-2731.

It’s time to kick off a new Free Drawing. This week’s prize is an audiobook of Blood Honor, the debut novel in my friend Russell Blake’s The Day After Never post-apocalyptic trilogy. To enter, all you have to do is click on this Free Drawing link or the tab at the top of this page and enter your name in the comments section at the bottom of that page (not this one). Only one entry per person per drawing please, and you must enter with your real name. To prevent spam or multiple entries, the names of cartoon or movie characters are not allowed. The winner will be drawn Sunday evening. 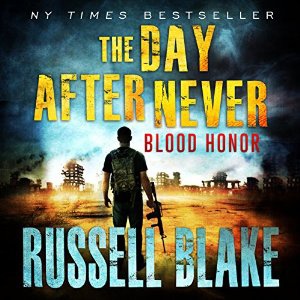 Thought For The Day – My wife does all the driving, I just hold the steering wheel.