Nick's Blog » When Did That Happen?

We almost had a shooting at our house yesterday morning. I got up and stumbled in the bathroom half-asleep, flipped on the light, and there was some naked old pervert standing there staring at me. I’m glad I didn’t have my .45 in my hand, because Miss Terry said replacing that great big mirror would be pretty expensive!


We all eventually reach an age and body size where mirrors are no longer our friend. I have hit that milestone. When did that happen? How did all those years go by so fast?

Wasn’t I a teenager just a couple of weeks ago? I guess not, since yesterday I filled out the AARP application for my Medicare supplemental plan, which will kick in October 1st.

Not that I’m complaining, mind you. It’s been a great life and this is the very best part of it. I have a fantastic wife, a comfortable home, and I get to make my living writing stories. Nope, nothing to complain about here. Oh sure, there are those little aches and pains that we all have as we get older. Some of them are just part of the aging process, and some are reminders of the dumb things we did when we were young and foolish. Still, no complaints.

Well, maybe one complaint. Terry and I are both sick and tired of wasting time with tire kickers who all want to buy our motorhome, but either can’t come up with the money or can’t make a decision. We thought we had a deal this week, and then it fell apart at the last moment. And then I had a man who wanted me to take six Great Dane puppies in part trade, assuring me that I could easily get $2,000 a piece for them because of their prime bloodlines. Hell, half the time I can’t afford to feed me, let alone a bunch of dogs the size of horses!


I think after this last go around we’ve had it with trying to sell the Winnebago on our own. I get a lot of calls and waste a lot of time, and I don’t really need the aggravation. So it looks like we’re going to take it to PPL Motorhomes in Houston and let them sell it on consignment for us.

They have already given us a ballpark figure that it will sell for based upon the current market, and it’s considerably more than the $45K we’ve been asking. So even after they take their commission, we’ll be in good shape. We’ve never dealt with PPL ourselves, but we know quite a few people who have, both as buyers and as sellers. We’re really not looking forward to another road trip, since we’ve already been on the go so much in the last couple of months, but it’s time to get something done.

If anybody is serious about a good deal for a lot less than you will pay on a dealer’s lot and are ready to buy, here’s a link to it. But you need to act fast, because this time next week it will be gone. https://gypsyjournalrv.com/motorhome-for-sale/ 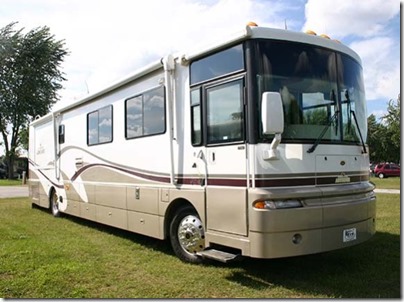 Speaking of road trips, I’ve heard from several people who had reservations in the Florida Keys starting in October, asking me if I thought it was okay to go down there for them. Three different people have told me they have tried to call their respective campgrounds and can’t get anybody to answer the phones. Yeah, that’s because they had a hurricane there. You may have heard about it on the news. One fellow was really upset because he made his reservations almost a year ago and this is really screwing up his travel plans. Do you think maybe the hurricane screwed up some other people’s plans and lives, too? As my son used to say, some people’s children…

Thought For The Day – There are two ways to face the future. One way is with apprehension and the other is with anticipation

7 Responses to “When Did That Happen?”