On a visit to Vicksburg National Military Park in Mississippi, we spent some time exploring the U.S.S. Cairo Gunboat and Museum and learned about the ill-fated Civil War ironclad gunboat.


One of seven ironclad gunboats named in honor of towns along the upper Mississippi and Ohio rivers, the heavily armed U.S.S. Cairo was a formidable vessel. Built at Mound City, Illinois, and commissioned in January, 1862, the Cairo and her sister boats were instrumental to the Union’s goal of controlling the lower Mississippi River, and split the Confederacy in two. 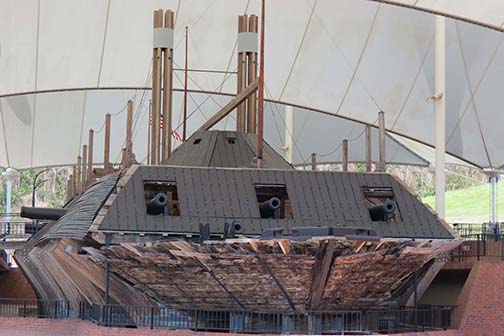 Each boat was armed with thirteen cannon capable of pounding enemy shore installations and gunboats, with each gun requiring a crew of six men. 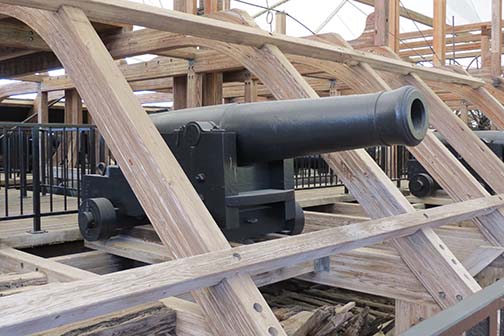 2½ inch thick interlocking iron plates protected the boats’ pilothouses and sloping casements from enemy fire. Behind the plates were white oak planks, 12 to 25 inches thick. When an iron plate took a hit from an enemy shell, their wooden backing prevented them from shattering.

The boats had steam engines serviced by five boilers that used a ton of coal every hour to turn their massive paddlewheels, and were capable of a top speed of nine miles per hour. A gunboat without steam could not move and was helpless if attacked, so even when anchored, firemen shoveled coal into each boiler’s firebox.

The crew of 158 sailors and 17 officers on the Cairo and her sister boats were a mixed lot, half of them immigrants from Germany, Ireland, Denmark, France, Germany, and the Caribbean. They were black and white, and in their civilian lives had been farmers, teachers, storekeepers, and laborers. Most had no sailing experience and learned their duties on the job.


For all of her armament and protective plating, the Cairo was destined to see only limited action, serving in the engagement at Plum Point in May, 1862 and in the Battle of Memphis in June.

Commanded by Lieutenant Commander Thomas O. Selfridge, Jr., an aggressive and promising young officer, the Cairo led a small flotilla up the Yazoo River north of Vicksburg on the cold morning of December 12, 1862. Their goal was to destroy Confederate artillery batteries along the river’s banks and clear the channel of torpedoes (underwater mines).

Seven miles north of Vicksburg the flotilla came under fire and Selfridge ordered the Cairo forward past the other boats into unexplored waters. Suddenly two explosions tore gaping holes through the gunboat’s hull, and within twelve minutes the Cairo sank in 36 feet of water. She was the first ship in history to be sunk by an electrically detonated mine.

The crew abandoned ship so quickly that there was no time to salvage any of their personal possessions, but fortunately, they all survived and were quickly rescued by the other boats in the flotilla.

When the Cairo sank, her smokestacks were visible above the waterline, and her sister boat, the Pittsburg, quickly knocked them down to hide her location from the enemy.

After rescuing the Cairo’s crew, the rest of the flotilla retreated to the mouth of the Yazoo River and the crew boarded the lightly armored Marmora for transport to the Cairo, Illinois Naval Station for reassignment.

With the war raging, the Cairo was soon forgotten, and over time the wreck was covered by a thick coating of mud. Over the years wreckage was spotted during low water periods, and local residents believed it was the remains of the Cairo. But historical records placed the site several miles downstream.

Armed with an inexpensive compass and years of historical research, historian Edwin Bearss set out with Civil War buffs Don Jacks and Warren Grabau on a cold November morning in 1956. When their compass needle deflected consistently over a single point in the river, they were sure they had found the shipwreck.

But it would be three more years before divers were able to battle the river’s swift current and heavy accumulation of silt to bring up armored port covers that positively confirm the find. The next step was to raise funds to launch a recovery effort.

Hopes of raising the Cairo intact were crushed in October, 1964 when the cables being used to lift the vessel cut deeply into its wooden hull. It then became a question of saving as much of the vessel as possible. A decision was made to cut the Cairo into three sections, and by the end of December, they were put on barges and towed to Ingalls Shipyard in Pascagoula, Mississippi.


In 1972, Congress enacted legislation authorizing the National Park Service to accept title to the Cairo and restore the gunboat for display in Vicksburg National Military Park. The vessel was transported to the park and partially reconstructed on a concrete foundation near the Vicksburg National Cemetery. The restoration project was completed in 1984, and the exhibit was opened to the public in 1985.

Archeologists were delighted to discover that the same thick mud that had covered the Cairo had also created a time capsule, preserving almost everything inside. The recovery of artifacts from the Cairo revealed a treasure trove of weapons, supplies, and personal gear of the sailors who served on board. The gunboat and its artifacts can now be seen at the U.S.S. Cairo Museum in Vicksburg Military Park. 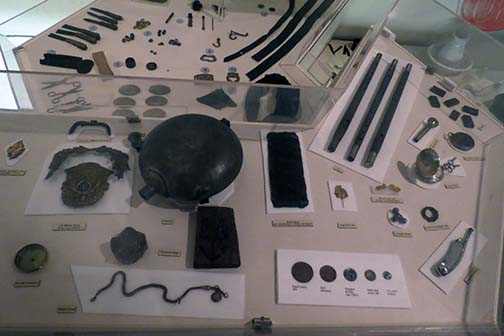 Among the items recovered from the Cairo and on display in the museum are tools, silverware, bottles, cannonballs, dishes, cups, and the gunboat’s 400 pound brass bell. A pocket of air, trapped inside the bell when the Cairo sank, bubbled to the surface when it was raised. It is amazing to see the artifacts in such good condition and realize that they sat underwater for 102 years. The pictures here do not do them justice, you have to go to Vicksburg and see for yourself. 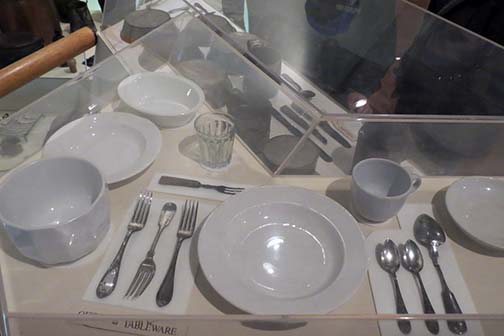 The U.S.S. Cairo Museum is open daily from 8:30 a.m. to 5 p.m., except Thanksgiving Day, Christmas Day, and New Year’s Day. The restored gunboat and adjacent museum are handicapped accessible. For more information, call (601) 636-2199.

Thought For The Day – I wish the buck really did stop here; I sure could use a few of them.