Nick's Blog » The End Of An Era

In yesterday’s blog I told you about last week’s fast trip to Texas to drop off our Winnebago Ultimate Advantage at PPL Motorhomes in Houston. I ended that blog by saying we were spending the night at Gulf Coast RV Resort in Beaumont.


It was a nice campground, made even nicer by the fact that they have free breakfast in the morning. Coffee, juice, milk, rolls, and more. We were up early because we wanted to get into Houston before traffic got too bad, but we did stop in long enough to grab coffee for Terry and orange juice for me before we left.

Houston traffic is always terrible, even on a Sunday morning. But we managed to make our way through it and arrived at PPL Motorhomes without incident, except for some frazzled nerves. PPL has several back-in RV sites with 30/50 amp electric outlets, water, and a dump station. We were the only rig there and it didn’t take us long to get parked and hooked up. 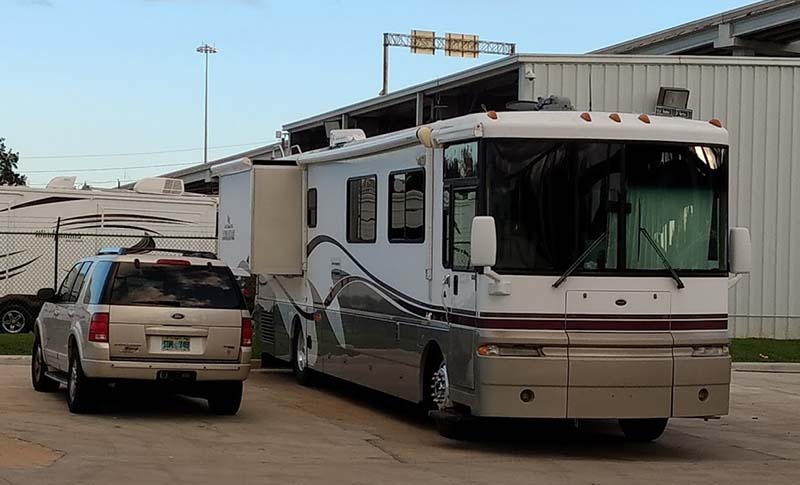 Within the hour our good friends Greg and Jan White arrived, having driven from the campground they are staying at about 80 miles north of town. There were lots of hugs all around and we visited for a while, and then we drove to an excellent restaurant called Floyd’s Cajun Seafood for lunch. The food was just as good as the company and we had a good time.


We’ve known Greg and Jan for about ten years and they are two of our closest friends in the world. We had met them when we were teaching at Life on Wheels and at a couple of RV rallies, but things really solidified a couple of years after we first met, on a cold rainy October morning at Elkhart Campground in Indiana when the water heater on our newly acquired Winnebago stopped working. I went outside, opened the water heater compartment, stared at it and scratched my head and my butt, and when that didn’t solve the problem, I went in search of someone who knew more than I did. Which is just about anybody in the world.

I seemed to remember Jan saying that Greg was good at figuring out problems, so I knocked on their door and, as Greg put it in a recent blog, “said those fateful words; I hear you’re good at fixing things.” A few minutes later he was standing in an ankle deep puddle tearing into the water heater, and it didn’t take him long to get it working again. I knew I had found a friend for life. Over the years, I can’t tell you how many times Greg has fixed things for me, everything from computers to a bad black water dump tank valve. (Yes, that’s when you really know who your friends are!)

Given all that, it only seemed fitting that I had one last project for him. The latch on one of our bay doors had broken, so when we were back at PPL he made short work of replacing it. The end of an era, folks. 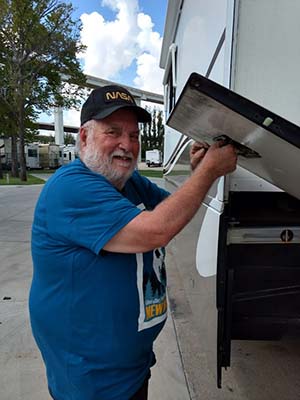 With that job out of the way, we visited for a while more and then they headed back to their campground. I don’t know when our paths will cross again, but Greg and I usually talk on the phone every day or so, and we’re all looking forward to getting together again.


Terry and I spent the rest of the day watching TV and reading e-books on our Kindles, and just before dark we both realized we were hungry again. We don’t know our way around Houston very well, but we managed to find an IHOP just a mile or so away. IHOP has never been my favorite restaurant, but it would always do in a pinch. However, that all changed when I walked in and saw this on their menu. French toasted donuts! Think about this, folks – it’s a donut, it’s French toasted, and then they put bacon on it. I’ve never been more proud to be an American in my life! 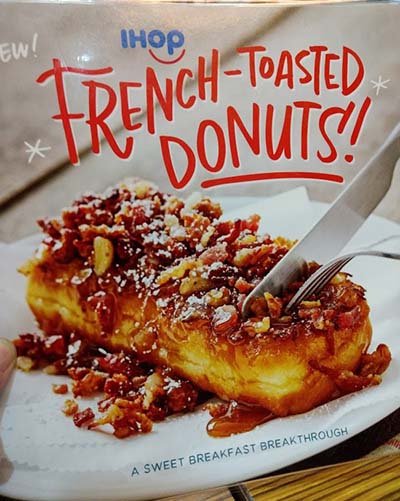 Back at the motorhome, we took showers and were in bed early because the first thing Monday morning we had to take the motorhome to get its safety inspection and then meet with the appraiser from PPL. If we hadn’t been so worn out from our fast trip across the country from Florida, I think we both would have been feeling a little nostalgic on spending our last night in what had been our home on wheels for over seven years of our fulltiming life. But we were exhausted, and even the noise of the constant traffic from the multi-levels of highways just above us didn’t disrupt our sleep.

Thought For The Day – Do not let the future be held hostage by the past. – Neal A. Maxwell

4 Responses to “The End Of An Era”