Rising eerily out of the prairie along U.S. Highway 385 a few miles north of Alliance, Nebraska, a cluster of gray forms, arranged haphazardly, draws the eye. “What is that?’ you ask yourself. Then, as you draw closer, you realize that what you are seeing are the hulks of old automobiles. But this is no ordinary roadside junkyard, and you have to pull over to investigate. You have stumbled upon an iconic piece of American folk art named Carhenge.


Modeled after Stonehenge, the prehistoric English monument, Carhenge is the brainchild of Jim Reinders, who erected the monument on the family farm to honor his father’s memory. Reinders had visited Stonehenge as a young man and remained impressed with it all of his life.


His creation incorporates 38 vintage American automobiles, all painted flat gray and arranged in the same proportions as Stonehenge. The sculpture’s circle measures approximately 96 feet in diameter. Some of the cars are buried trunk end down, while those used to form the arches have been welded in place. A 1962 Cadillac has the honor of placement as the heel stone. 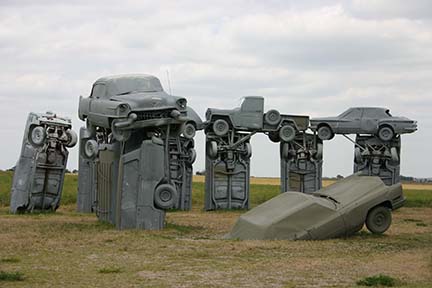 Visitors to Carhenge over the age of 40 will see many old automobiles they remember, from a Chevrolet Vega station wagon to an AMC Gremlin, a Plymouth Valiant and vintage Cadillacs. The cars were rescued from farm fields and junkyards to become part of the sculpture, living on long after their useful life was seemingly over. 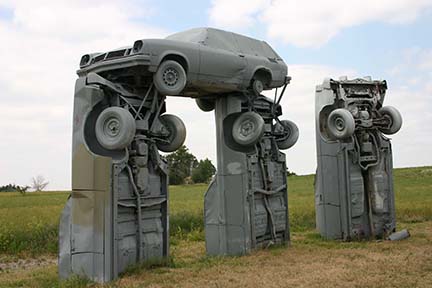 When Reinders and his family began erecting Carhenge, the folks around Alliance were not impressed. In 1989, the Alliance City Council ordered it torn down because the land was zoned for agricultural use. The State of Nebraska called it a junkyard and demanded that a fence be put up around the perimeter. A group called Friends of Carhenge was formed and began a crusade to save the sculpture. Soon protests were coming in from across the country and around the world. 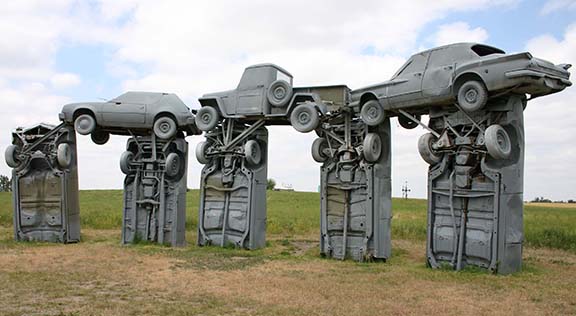 When the townsfolk realized that what they were calling a junkyard was actually fast becoming a tourist attraction that would bring visitor dollars to the community, they did an abrupt about face and embraced Carhenge. Visitors to town are greeted with signs that proudly identify Alliance as the “Home of Carhenge.” 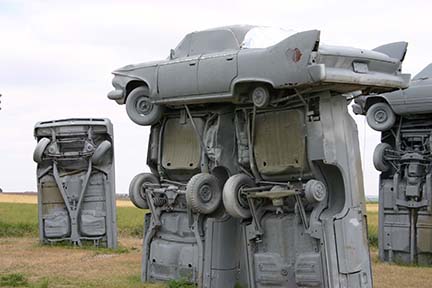 Today the Friends of Carhenge manage the sculpture, which sits on ten acres that Reinders donated. A parking area can accommodate RVs, there is a small gift shop and picnic tables. Other pieces of car art have been added, including animals made from car parts. Carhenge is open 24 hours a day, but overnight parking is not allowed. Over 80,000 visitors from around the world come here every year to walk the paths and admire the old cars that once were junk, but now are a work of art.

Thought For The Day – I think I’m starting to lose my mind. But as long as I can retain the part that tells when I have to pee, I’ll be okay.