Most people who know me well will tell you that I have a few decent qualities including a good sense of humor, a bit of intelligence, and I’ve even been accused of generosity a time or two.


However, if they were honest, they would also tell you that patience is not one of my virtues. I don’t suffer fools well. So when yet another tire kicker who was interested in our Winnebago motorhome wasted our time asking endless questions and then wanted to know if we would accept payments (even though I said in the ad that we would not), my bullsh#$ tolerance level was exceeded and I was done with the whole for sale by owner process.

We have several friends who have done business with PPL Motorhomes, a big consignment RV dealer in Houston, Texas, both as buyers and sellers, and they all seemed to have had a good experience. So last Friday we hit the road for a trip to Texas to drop the Winnebago off with them

We were on the road early and drove 440 miles, spending the night at Eagles Landing in Holt, Florida. This is a very clean, small campground just off Interstate 10 where we have stayed many times over the years.

The next morning we were on the road again, motoring west into Alabama. We both winced as we passed the spot in Mobile where we had been broken down for 12 hours back in June, but this time we had no problems and kept on rolling.


At the same time we were headed west from Florida toward Texas, our friends Charles and Chris Yust from C&C Insurance were headed east from Texas toward Florida. Chris texted Miss Terry to ask where we were, and it turned out we were only 24 miles apart. So we jumped off the interstate, got fuel at a Pilot truck stop, then went a mile or so down the road and pulled into the parking lot of a nearly vacant shopping center to meet up with them.

It’s always nice to see Charles and Chris, and we had a fun visit, even if it was short. I took this picture of our motorhome next to their Class C before we shared a last round of hugs and both couples got back on the road, headed in opposite directions. 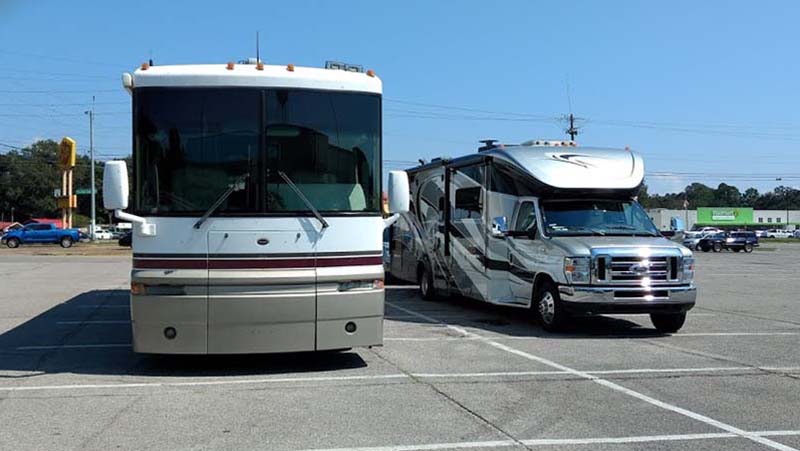 It was a good day for traveling, and we really wanted to get to our destination on Sunday, when we hoped traffic would not be quite as bad in Houston. So we crossed into Mississippi, then Louisiana, and sometime around 5:30 PM we pulled into the Flying J truck stop in Orange, Texas to fuel up and to get the motorhome weighed on their CAT scales, because PPL required a weight certificate. With that done, I drove across the street to the Blue Beacon truck wash to get the rig washed so it would look nice when PPL’s appraiser looked it over Monday morning.

That was a big mistake, because there was one eighteen wheeler inside each wash bay, two others waiting their turns, and a third one pulled in behind me. At first I wasn’t too concerned because we have used Blue Beacon’s all over the country and we’re usually in and out in a short time. But not this time around. Apparently the trucks in the bays had been sitting somewhere for two or three years and were covered in grime. Grime which the owner wanted off, regardless of the cost. So they washed them, and washed them, and washed them over and over again until they finally met with his approval. By then all the truckers were complaining, and we have already talked about my level of patience. If we hadn’t been blocked in front and rear I would have left, but we were stuck.


Finally, close to two hours after we arrived it was our turn to get the rig washed. But the fun wasn’t over yet because their high pressure hose managed to destroy the end plastic cap of the door awning. In their defense, the thing was 15 years old and very brittle, so I didn’t complain too much about that. Miss Terry had already listened to me complain all the time we were sitting there and I don’t think she could have taken any more.

By the time we were done at the truck wash it was dark, and we still had 27 more miles to go to reach our campground, Gulf Coast RV Resort in Beaumont. My night vision is terrible, so Terry drove the rest of the way. That turned out to be another horrible experience, because we discovered that the headlights on the motorhome were very, very dim. We never drive at night, so we never knew that before. I’m not sure if it’s because the lenses are clouded or what the problem is, but it was all Terry could do to be able to see where she was going. And it didn’t help that much of the route was a construction zone with narrow lanes. Believe me, if there would have been a safe place to get off Interstate 10 and park for the night, we would have. But there wasn’t.

There is absolutely nothing my beautiful and talented wife can’t do, and though it was pretty harrowing she was up to the challenge and got us there safely. Part of what makes our marriage work is that we each have our own strengths and weaknesses, and when we combine our efforts we make a darned good team.

By the time we arrived at the campground and parked in our pull-through site, we were both wiped out. But we had not packed any food or provisions in the motorhome, so we had to make a quick run to a nearby Jack-in-the-Box for something to eat. Then it was back to the motorhome, quick showers, and we fell into bed exhausted with 475 miles behind us. Yes, I know that’s a long day in a motorhome. But we weren’t on an RV trip, we were on a delivery trip and we just wanted to get there.

Tomorrow I’ll tell you about our trip into Houston, a meet up with our good friends Greg and Jan White, and our first impressions of PPL. Meanwhile, if you’re looking for something good to read, Not a Whisper, the first book in my dear friend Donna McNicol’s small town Klondike mystery series is available free today and tomorrow on Amazon. Grab yourself a copy, I think you’re going to enjoy it. 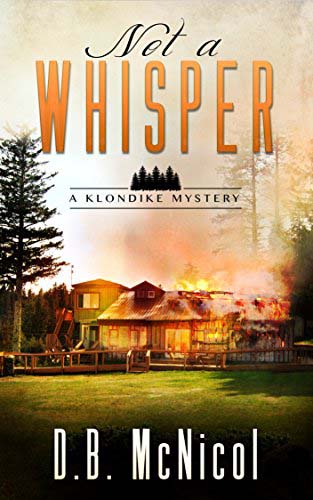 Thought For The Day – I’ve put myself in time out until I can play nice with others. This could take a while.

3 Responses to “Road Trip To Texas”