In yesterday’s blog we did some time traveling as I told you about some of the things we did while we were in Alabama visiting my son Travis and his wife Geli as we were waiting out Hurricane Irma. Today I’ll catch you up on the rest of it, and on our trip home.


Anybody who knows me knows that I am a pretty basic guy when it comes to food. Give me meat and potatoes every day and I’m a happy camper. So I don’t know how I, as a single father, raised a son who turned out to be a vegan. I may need to get a DNA test one of these days.

At any rate, Travis and Geli don’t eat meat or animal products, but they do love Chinese food. And as you well know, that’s something else I like. Well, I like the meat, and even the rice, which I think of as tiny little bits of potato. As for the vegetables, somebody else can have mine.

There is a very good Chinese restaurant and market in Tuscaloosa called Mr. Chen’s, and we make it a point of eating there every time we come to town. Their shrimp fried rice is excellent, and the kids eat something with tofu in it. They keep telling me if I would just try it, I would love it, but I’m pretty happy in my little world the way it is and see no reason to make any changes. We actually ate at Mr. Chen’s twice while we were in town. Yeah, it’s that good.

During the Civil War, several thousand men from Tuscaloosa fought in the Confederate army, and Tuscaloosa factories supplied uniforms and cannonballs for the cause. At that time the University of Alabama was considered the West Point of the South and many of its cadet graduates became officers in the Confederate army. Union commanders targeted the college for destruction, and in the closing days of the war Northern troops advanced towards the city. They were met at the Black Warrior River bridge crossing by the cadets from the University of Alabama and members of the Tuscaloosa Home Guard, which was composed of older men deemed unfit for regular military duty. For their part, the cadets were mostly young boys, because the older students had already left to join the fighting elsewhere. There was a brief skirmish before the defenders retreated and Union troops moved into town, burning much of the university on April 4, 1865.


Travis and Geli live in a house located near the river and the university, and my research shows that it was probably built around 1920. I’ve also read reports that Union troops occupying Tuscaloosa camped in that area, so I’ve been eager to get up there with my Garrett AT Pro metal detector to see what I could find. While we were in town, Travis and I spent some time looking for targets in their yard on a couple of days. And boy, did we get lucky!

Of course, we found lots of bottle caps and other junk, but also some other assorted buried “treasure.” The large triangle shaped item on the left looks to be the nameplate off an old car. I still have to clean it up. To the right of the second row of bottle caps is a small silver thimble. The spoon and the top from an old salt shaker were both found under a tree in the front yard. The coin at top left is a 1928 Standing Liberty quarter and next to it is a 1929 Mercury dime. We also found several pennies, including a 1941 wheat penny. But the amazing finds were the two large coins in the second row. One is an 1826 and the other is an 1843 large cents. 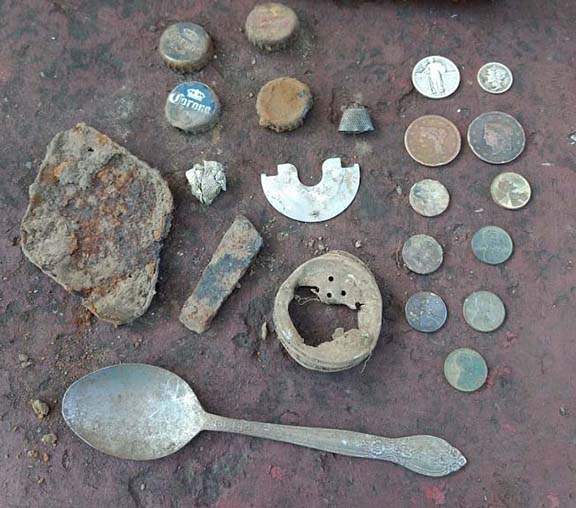 Here are close-up pictures of those two coins. They were found in the same hole, about five inches down. As I said before, this was supposed to be a Civil War encampment. Who knows? Maybe some soldier lost them long ago. 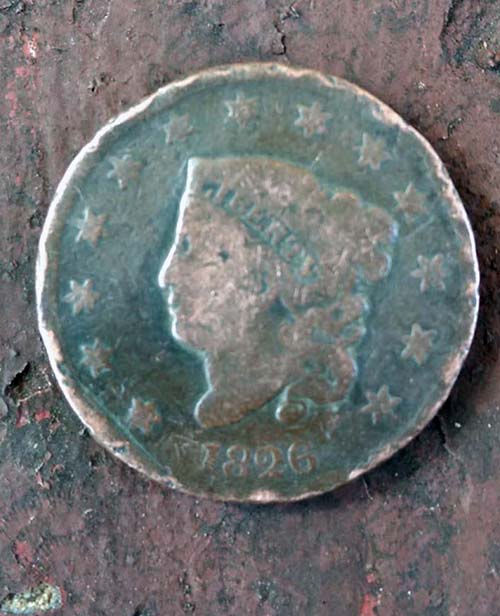 And here are some other coins we found, including 1951 and 1954 silver quarters, 1934 in 1937 Mercury dimes, and an 1889 nickel. There were a lot more deep signals, but the ground is very rocky and hard to dig. I’m sure there are other goodies waiting there. Needless to say, getting a metal detector is very high on Travis’ list of things to do! 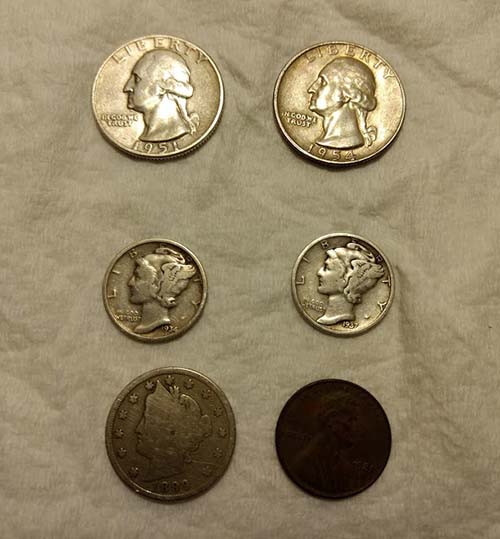 We left Tuscaloosa on Wednesday, the 13th, headed back home. I love traveling America’s back roads, there is always something interesting to see. We have driven past this old trading post many times. It’s another place I would love to spend some time metal detecting. 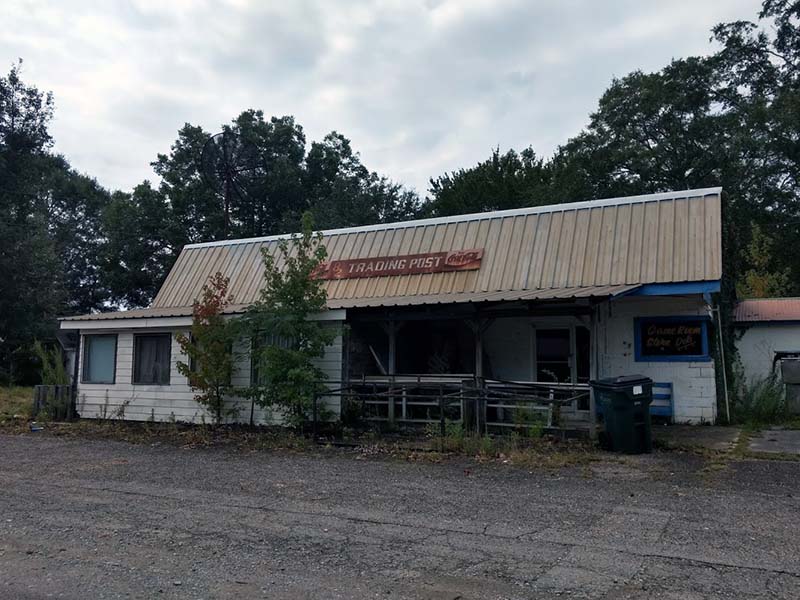 Keeping to the US Highways as long as we could, we crossed into Georgia on US Highway 84. It was another good divided four lane road passing through lots of pretty countryside. We stopped for the night in Thomasville, a little over 300 miles from Tuscaloosa. We have driven all the way from Tuscaloosa to Edgewater in one trip a couple of times, but as eager as we were to get home, we just didn’t want to push too hard.


I’ve always wanted to spend some time in Thomasville, which is a very nice little town that was a popular winter retreat for folks from up north in the old days, who went there to escape the cold weather. Many of them built beautiful homes, which are still standing near the downtown area.

We stayed at the Days Inn, which was a mistake I won’t make again. While the room was adequate, the service was minimal and very rude. I’m getting to an age where I sometimes find myself in urgent need of a bathroom, and I was in that situation when we arrived. I told a woman named Pam at the front desk we were there to check in on our reservation, but that I really needed a bathroom first. She very rudely said they don’t have a public bathroom and I’d have to go to the gas station next door. I told her I didn’t think I could make it that far and she just shrugged her shoulders. After checking in and barely making it to the room (where the toilet seat was loose and seemed ready to fall off), we discovered that the coffee pot still had the grounds in it from whoever used it last. Not a big deal, but that lack of attention to detail makes me wonder about how thorough the other cleaning is.

Aside from that, we really enjoyed our brief visit to Thomasville. We had an excellent dinner at a place called Jonah’s Fish & Grits in one of the historic buildings downtown. We liked the feel of the whole community. The downtown area was very clean, with all kinds of interesting little shops and stores that would be fun to explore. 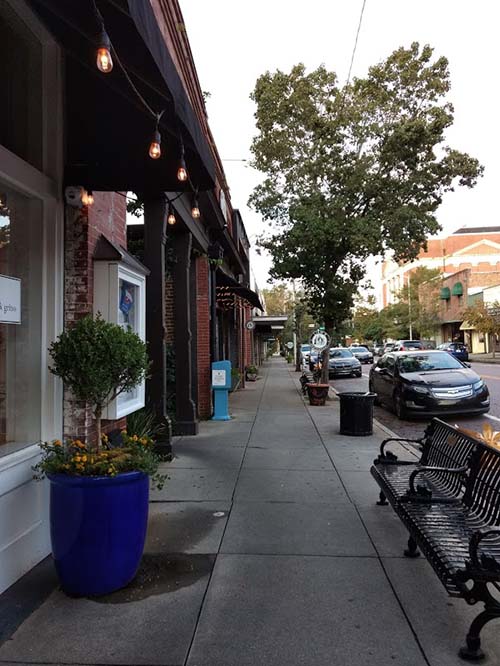 We had planned to stay a second day, but after one night at the Days Inn we cancelled the second day and left the next morning. When I stopped to drop off the room keycard there were customers in the office for the free “breakfast” but no employees. One woman said she had been there fifteen minutes and not seen anyone from the staff. We will return to Thomasville again sometime, but needless to say, we won’t be staying at the Days Inn.

It was another 40 miles to Valdosta, where we got onto Interstate 75 southbound. We expected a lot of traffic with hurricane evacuees heading back to Florida, and while the highway was busy, we moved right along at 75 miles an hour. When we came to Interstate 10 we thought it would be just as busy, but there was almost no traffic at all heading east. We made good time all the way to Jacksonville, where we took Interstate 95 home. It had been a busy and stressful week, and with 275 miles behind us that day, it sure was nice to pull into our driveway and see our home still standing, even if we did have to spend a few days sleeping in our Winnebago, using the generator for power.

Even though there are still some other storms out there in the Atlantic and we are not through hurricane season yet, hopefully things will stay stable in our area and we won’t have to repeat this adventure anytime soon.

Thought For The Day – It is hard to make a comeback when you haven’t been anywhere.