When Helen Keller was born in Tuscumbia, Alabama in 1880, our world was a very different, and sometimes harsh place. People with physical challenges faced a hard life under the best of circumstances, and a child growing up handicapped often had a very limited future.


Helen Keller was born into this world as a healthy child, but at the age of nineteen months she became very ill, and though she recovered, the ordeal left her both deaf and blind. Helen was the daughter of a well to do family and her father, who had served as a Confederate officer during the Civil War and was forever after known as Captain Keller, refused to accept the fact that somewhere he could not find someone to help his daughter escape her dark and silent world.

By the age of six, Helen was almost untouchable, described by many as “half-wild.” Her father took her to visit noted inventor Alexander Graham Bell, who helped arrange for a remarkable young woman named Anne Sullivan to come to Ivy Green, the family home in Tuscumbia, as Helen’s teacher.

Anne Sullivan was a dedicated and stubborn teacher, more than capable of dealing with this undisciplined child. She was also immediately filled with love for her new charge, and dedicated the rest of her life to caring for seven year old Helen.


Anne Sullivan’s methods were unorthodox, and there could have been a power struggle between parents and teacher that might have hampered Helen’s education. Fortunately, Helen’s family were willing to allow the teacher to do what she thought necessary to break through the walls imprisoning their child.

Anne’s first step was to remove Helen from the family home and move herself and the young girl into a smaller building next door that Helen’s parents had lived in when she was born. Anne pushed Helen in a stroller for hours before finally taking her into the house, convincing the child she was far away from her family and home, and forcing her to rely on her teacher for everything. Then Anne Sullivan set to work to break through the silence. 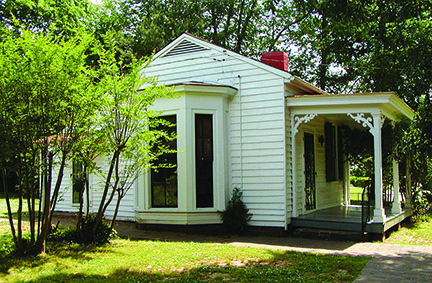 Working day and night with Helen, Anne tried one method after another to reach the child. The miracle breakthrough came at a well in the back yard, when Anne pumped cool water over one of Helen’s hands, while repeatedly tapping out an alphabet code of five letters in the palm of her other hand. The scene was repeated over and over again as the young girl struggled to escape her world of silence. 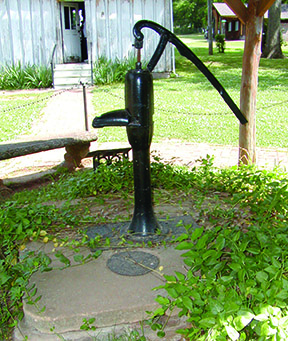 Suddenly the signals connected, and Helen understood that the tapped code letters w-a-t-e-r meant the cool liquid flowing over her hand, and remembered water from her first days, before illness had struck. “Waa waa” she uttered excitedly. Communication was established, and by the end of the day Helen had learned an astonishing thirty words! 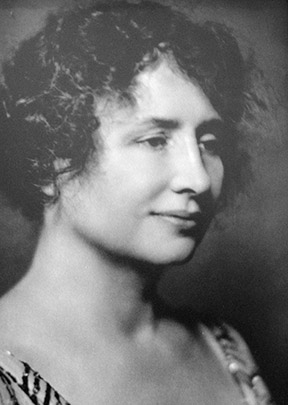 Once locked in a prison of silence and darkness, Helen Keller dedicated her life to improving conditions for the blind and deaf around the world. She wrote numerous books and became an accomplished public speaker. She lectured in more than 25 countries on five continents, and wherever she appeared she brought new hope and courage to millions of blind people.

Anne Sullivan, the teacher who would not give up on Helen, became known as the “Miracle Worker” and spent the rest of her life working with her student and friend.

Today Ivy Green, the Helen Keller home and birthplace, is a museum to the brave young girl who grew up to inspire so many. The simple white clapboard home was built in 1820 by Helen’s grandparents, David and Mary Keller, and originally sat on a 640 acre tract of land. Untouched by the ravages of the Civil War, today the home is maintained to the smallest detail in its original state, and though the grounds have shrunk considerably, several outbuildings still remain, including a cooking shack, the separate small cottage where Anne Sullivan took young Helen to begin working with her, and the famous well pump where child and teacher finally managed to make a connection. 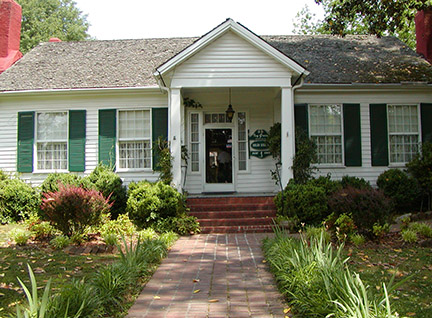 Inside, the house is furnished with many Keller family furnishings and items. Each room holds hundreds of Helen Keller’s personal mementos, books, gifts from admirers, photos of Helen at different stages of her life, and her clothing. One museum room contains books written by Helen Keller, her Braille typewriter, a handsome bust of Helen, and toys she played with as a child. 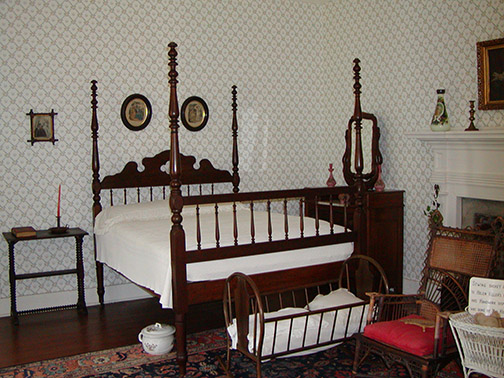 The grounds at Ivy Green include outbuildings and the Lions International Memorial Garden, which gives some idea of the millions of lives that Helen Keller touched. The estate is nestled under a canopy of 150 year old English boxwood, magnolia, mimosa, and other trees. Roses, honeysuckle, and other flowers scent the air with a wonderful fragrance.


During June and July, William Gibson’s famous play The Miracle Worker, based on Helen Keller and Anne Sullivan’s lives, is presented on the grounds on Friday and Saturday evenings. Tuscumbia also holds a Helen Keller Festival in June of every year to celebrate Helen Keller’s accomplishments, with children’s activities, a parade, art and craft shows, an antique show, car show, vendors and other special events.

A visit to Ivy Green is a wonderful opportunity to learn more about Helen Keller, her teacher Anne Sullivan, and about the accomplishments Helen made for the benefit of the blind and deaf.