Depending on who you talk to, Bonnie Parker and Clyde Barrow were either bloodthirsty killers, bumbling hicks who got caught up in a life of crime, or maybe even star-crossed lovers. Whatever they were, their lives and exploits had absolutely no resemblance to the highly romanticized story portrayed in the 1967 movie starring Warren Beatty and Faye Dunaway.


From the time they first met in Texas, in January, 1930, until they were cut down in an ambush in Bienville Parish, Louisiana on May 23, 1934, the outlaw couple’s crime spree reached from New Mexico to Michigan, and they left a trail of bloodied bodies and empty bank vaults in their wake.

Bonnie was 19 and married to a man serving a prison sentence for murder when she met Clyde, who was two years older and already had a record of petty criminal offenses. It wasn’t long before he was arrested for a burglary and sent to jail. Bonnie smuggled a gun to him and he escaped, but was quickly recaptured and sent back to prison. 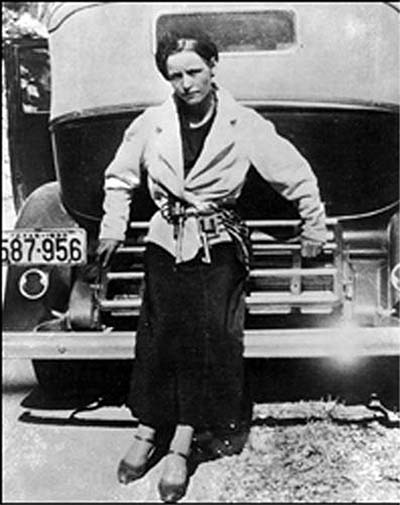 As soon as Clyde was paroled, in February 1932, he picked up Bonnie and they resumed their life of crime. By the time they were killed, they were believed to have committed thirteen murders and dozens of robberies and burglaries. 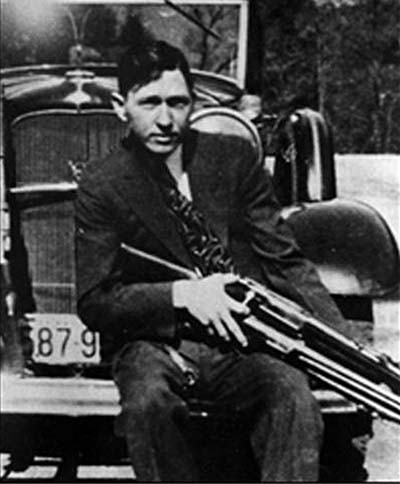 Among those crimes were the murders of two police officers in Joplin, Missouri; a man Clyde allegedly murdered at Hillsboro, Texas; the murder of a deputy sheriff and the wounding of another at Stringtown, Oklahoma; as well as other murders in Texas and Missouri. Along the way they also kidnapped a number of victims. Their thefts and robberies ranged from stores and banks in several states, and numerous automobile thefts. It was the stolen cars that eventually drew the attention of the Federal Bureau of Investigation, then called simply the Bureau of Investigation.


Traveling with a loose-knit gang that included Clyde’s brother Ivan M. “Buck” Barrow, Raymond Hamilton, William D. Jones, and Henry Methvin, Clyde would cover miles of back roads at high speed, usually behind the wheel of a stolen Ford V-8. In fact, he was such a fan of Fords that he actually wrote to company president Henry Ford and complimented him on the quality of his automobiles. It was not uncommon for them to rob a bank one afternoon and be two or three states away by the next day.

Both devoted to their mothers, the outlaw couple risked capture repeatedly to meet in small family reunions before setting off on another escapade. Bonnie was completely devoted to Clyde and ignored her mother’s pleas to leave him, though she knew staying meant certain death.

The manhunt for the outlaws came to an end when a posse compromised of former Texas Ranger Frank Hamer, Deputy Sheriff Ted Hinton and Deputy Sheriff Bob Alcorn, both from Texas; B.M. “Manny” Gault, another Texas lawman; and two Louisiana officers, Henderson Jordan and Prentiss Morel Oakley set up an ambush for them alongside a lonely road ten miles south of Gibsland, Louisiana. The posse blocked one lane of the road with a disabled truck and waited, suspecting that Bonnie and Clyde would pass through on their way to a meeting with Henry Methvin.

And sure enough, shortly after 9 a.m. on that ill-fated morning, they heard the sound of a speeding car approaching and raised their weapons. As soon as they identified the man and woman in the car the posse began firing, and within seconds it was all over. 130 bullets riddled the car and the outlaws inside of it. The long chase was over.


Today the story of what happened that May morning is told at the Bonnie & Clyde Ambush Museum, located at 2419 Main Street in Gibsland, which displays newspaper articles, photos, and guns related to the death of the outlaws. L.J. “Boots” Hinton, the museum’s curator, is the son of Ted Hinton, one of the posse members. Hinton was chosen because he actually knew both Bonnie Parker and Clyde Barrow; he had worked as a Western Union messenger with Clyde as a teenager, and had a crush on Bonnie when she was a waitress at a Dallas café where he frequently ate lunch before she met Clyde. The museum itself is located in the building that once housed Ma Canfield’s Café, where Clyde stopped and bought two sandwiches minutes before driving into the ambush that was waiting for them. 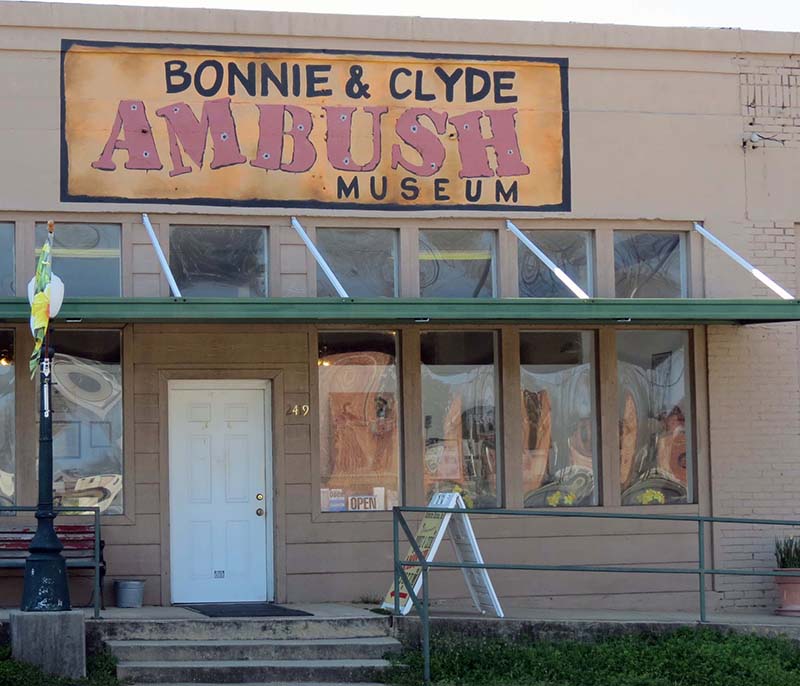 At the ambush site on Highway 154 a concrete marker that has been chipped away and shot many times by vandals over the years marks the place where Bonnie and Clyde met their fates. Highway 154 is a good two lane road and there is plenty of room for an RV to pull over while you visit the marker and contemplate the results of two lives cut short because they chose crime as their profession. 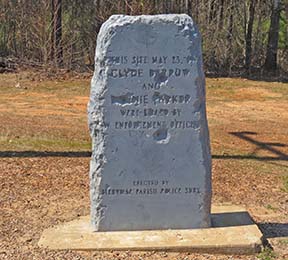 One Response to “Bonnie And Clyde”