After reading yesterday’s blog about the campers from hell, I received some interesting comments from campground owners and workampers. They were all in agreement that 99% of the people who come to their campgrounds are wonderful guests and a joy to be around. But they all agree that there is always that small number of cretins who make you wonder if it’s even worth getting out of bed in the morning.


One workamper I’ve known for a long time reported that when he went by to tell some people that it was quiet time and he was getting complaints about their noise, they turned the stereos on both of their cars up really loud and told him, “Sorry, I can’t hear you over the music!” Somebody else said that after telling a guest that they had to keep their dogs on a leash and pick up after them and dispose of their waste, they parked their golf cart next to their office, and came out the next morning to find dog feces smeared all over the seat and steering wheel. A lady who was a volunteer camp host at a state park said that she was threatened with violence twice by rowdy campers who didn’t want to obey the rules. Again, those people are the minority, but dealing with them is no fun at all.

Now here are the kind of neighbors to have! Terry looked out of our kitchen window yesterday morning and saw this pair of Sandhill cranes walking down the middle of the street like they owned the place. When we used to stay at the Orlando Thousand Trails in Clermont, or at the Escapees RV Club‘s Sumter Oaks campground in Bushnell, we used to see them all the time. We hear them flying over us here in Edgewater, but don’t see them as often. 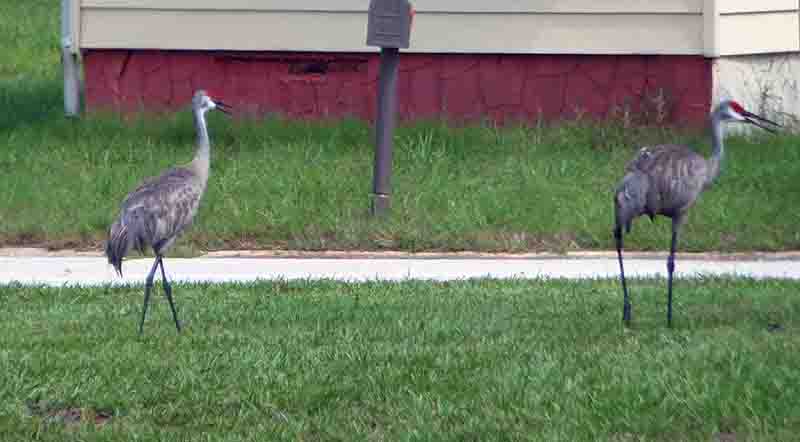 I’ve been pretty much chained to my desk all week working on my new book, so when our buddy Jim Lewis asked if we wanted to ride into Daytona Beach with him yesterday, I said yes, I was ready for a break.

Jim had an appointment for a blood draw at the lab at the VA clinic, and he was in and out in just a couple of minutes, then we spent some time running around town. Our old NordicTrack treadmill is on its last legs, and we have been nursing it along for a while now. I’ve been looking on Craigslist and haven’t found anything worth having at a decent price, so we stopped at Play It Again Sports to see what they had. There were some used ones that were overpriced, in my opinion, and a couple of new ones that caught our eye, one by Schwinn and one by Nautilus, which as it turns out is the same company these days. The Schwinn was on sale, but when I logged onto Amazon to see what the reviews were for it, I found out that Amazon’s everyday price was $100 lower than what Play It Again Sports was asking on sale, and with free delivery with Prime. I checked out the other three new models at the store, and again, every one of them was $100 to $135 cheaper on Amazon. I’d prefer to buy a secondhand one from somebody who hasn’t used it very much, but if I do go for a new one, I know where it’ll come from!

After a couple more stops, we were getting hungry, so we went to Hibachi Grill & Supreme Buffet, where I loaded up on General Tso’s chicken. Yummy! And probably better than Sandhill crane!


So far over 45 people have entered our latest Free Drawing. This week’s prize is an audiobook of my friend Suzie O’Connell’s Starlight Magic, from her popular Northstar romance series. To enter, all you have to do is click on this Free Drawing link or the tab at the top of this page and enter your name in the comments section at the bottom of that page (not this one). Only one entry per person per drawing please, and you must enter with your real name. To prevent spam or multiple entries, the names of cartoon or movie characters are not allowed. The winner will be drawn Sunday evening.

Thought For The Day – A primitive artist is an amateur whose work sells. – Grandma Moses