We have seen some oddball RVs in our time, everything from wacky school bus conversions that looked like 1960s hippy creations to RVs made out of old ambulances, and even a hearse once. Not to mention some very unique ones built on heavy duty truck chassis that looked like log cabins. I think if it has tires and an engine, somebody will turn it into an RV sooner or later.

When we were making our mad dash to Arizona to be with our daughter following her heart attack, we passed a strange looking RV somewhere on Interstate 10 in west Texas. It looked like some kind of recycled military vehicle, and I told Terry I would have liked to get a picture of it. But by then it was growing small in our rearview mirror.

So imagine my surprise the next morning when we walked out of the hotel in Fort Stockton where we had spent the night to find it parked out in front! This is a guy’s RV all the way and it was just dripping testosterone all over the pavement. 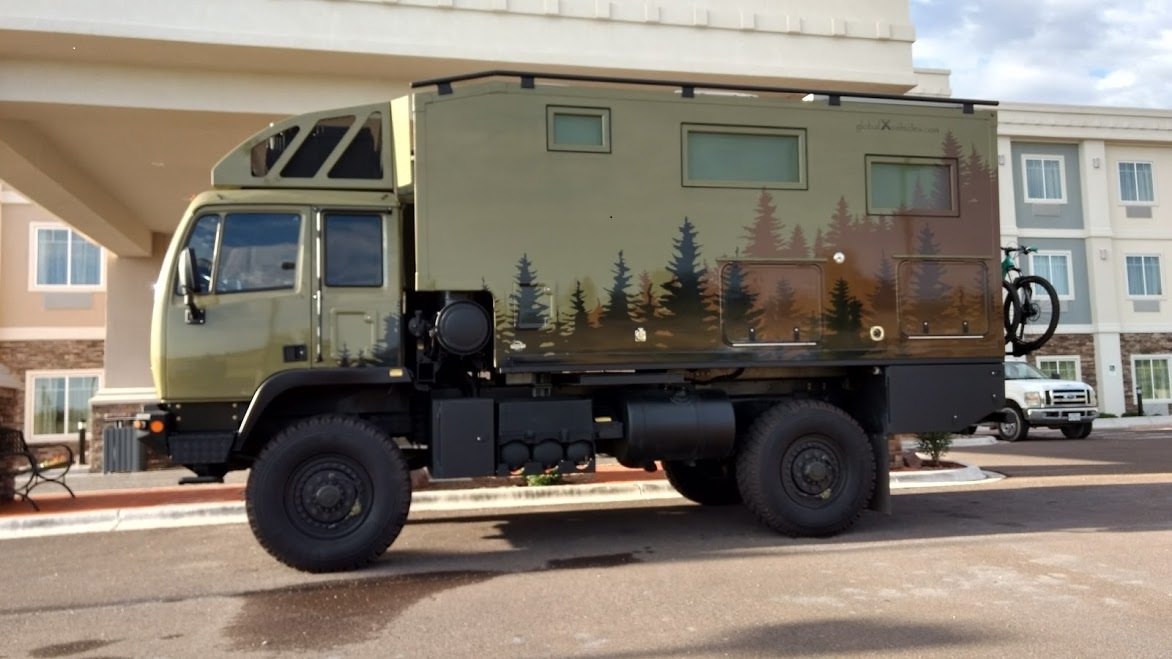 The owner was standing by it and I talked to him for a few minutes. He said it was made by a company in Oklahoma or Missouri, as I recall. He was very proud of the fact that it could ford rivers as deep as halfway up the driver’s door, and that it could go anywhere off the road. When I asked him how it rode and slept, he said not bad. (But keep in mind, he had spent the night in a hotel, for what it’s worth.) He said he was on his way to Colorado, but his wife and kids had taken alternative transportation. It looked kind of cool, but I can’t say as I blame them.

Later that day when we stopped for gas in New Mexico, I saw this sight. At first I thought somebody had missed the brake pedal and hit the accelerator, but then realized that it was a creative prop. 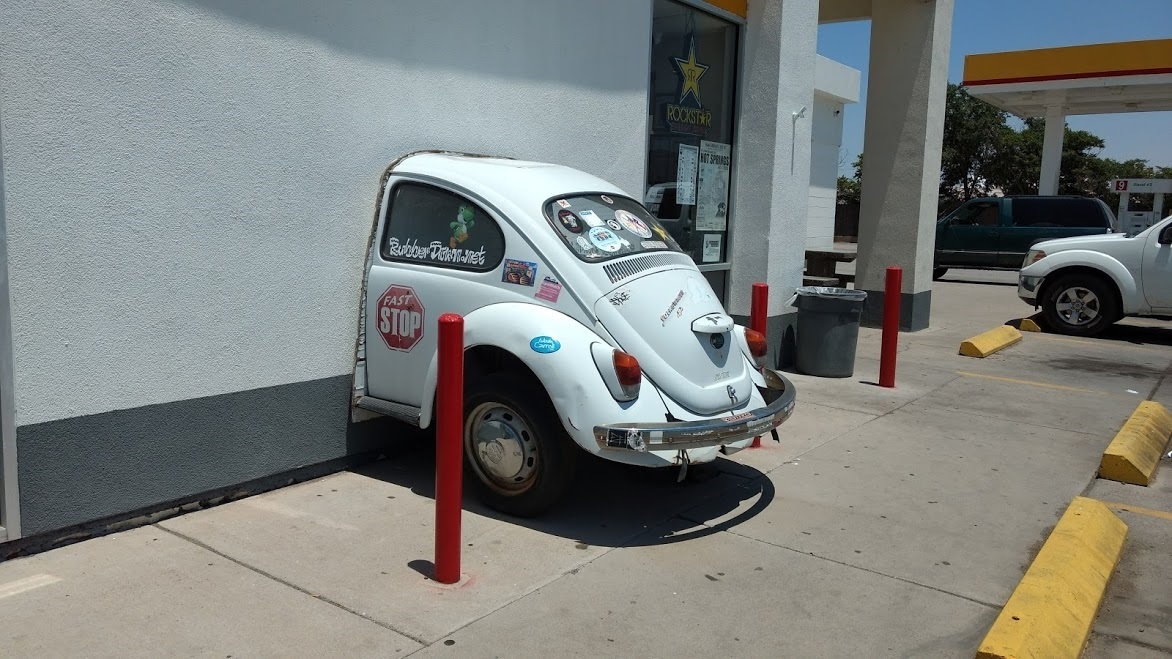 Speaking of different rides large and small, just like proud parents who can’t resist taking photos of their child’s first haircut, I took a couple of our new Chrysler Pacifica’s first car wash. And believe me, it needed it! When we left home the van had 132 miles on its odometer, and now it has 2870. It picked up a lot of road grime in the process. 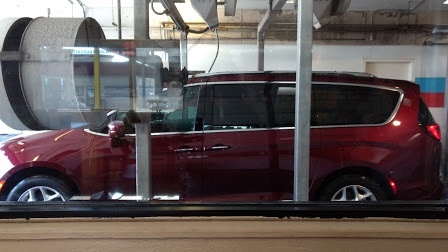 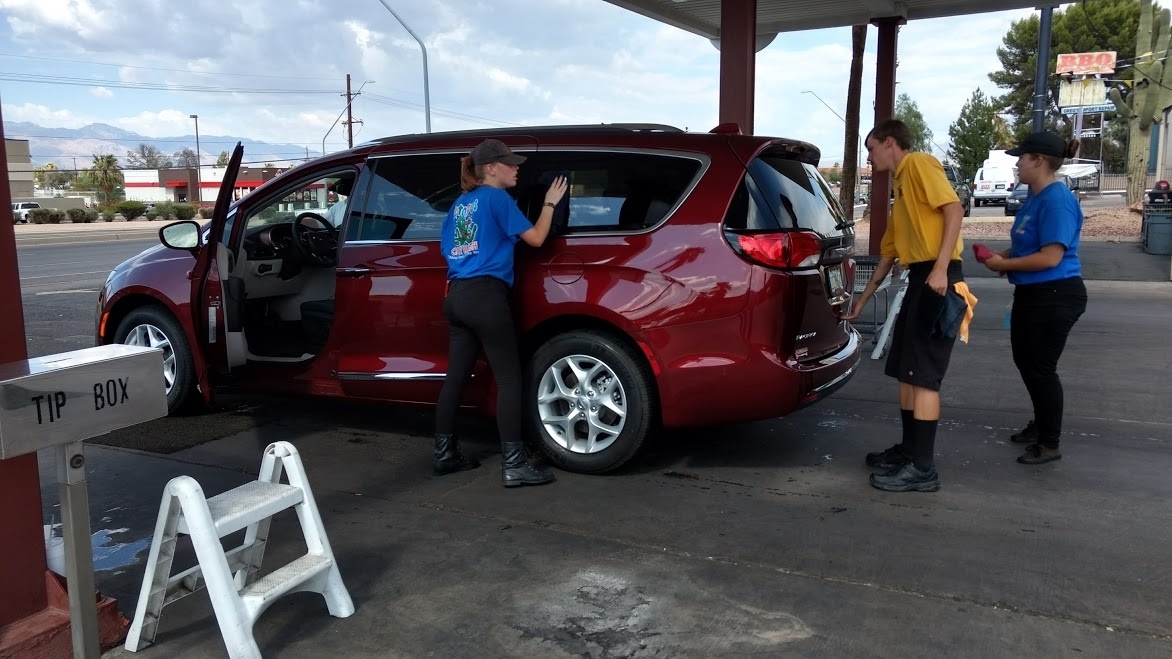 A couple of readers have asked me how we liked making the trip in the van instead of our Winnebago diesel pusher, and how the van rode on the trip. It’s a different method of traveling, with both pros and cons. It was a lot faster. I keep the Winnebago at 62 miles per hour most of the time, but in west Texas where the speed limit is 80 MPH we covered a lot of territory fast in the van. And even with paying for motels, it was still cheaper when you consider that the motorhome gets 7-8 miles per gallon as opposed to the 31 that the van’s computer said we were getting for much of the trip. It’s easier to get off the highway anywhere to get fuel, and we don’t have to scope out ease of access and exit when we do. But there is something to be said for having your own potty with you.

The Pacifica rides nice, but I think the seats in our 2005 Ford Explorer are more comfortable. And one thing I don’t like is driving the van in the mountains. Going uphill is fine, it has lots of power. But going downhill is a bit of a challenge. The van’s nine speed automatic transmission only has settings for Drive and Low gear. The Explorer has Overdrive, Drive, Drive 2, and Low. In the Explorer we can manually shift it into Drive 2 on steep downgrades and the transmission does a good job of controlling our speed. Not so in the van, I found myself having to step on the brake frequently when going downhill to keep our speed under control. Otherwise it’s a great ride, and features like the automatic lane assist, built in GPS, and great sound system make for a fun trip.

Thought For The Day – Frankly, autocorrect, I’m getting a little tired of your shirt.