On June 21st I posted a blog titled Terry’s New Ride, with pictures of the 2017 Chrysler Pacifica we bought for her birthday. And today we have to take it back to the dealer for its 5,000 mile oil change and checkup.


When I called to make the appointment, the service people were somewhat amazed that we had put so many miles on it in just over a month. But when I explained our fast trip to Arizona, and then back home by way of Alabama because of family medical issues, they understood. Hopefully it will take us quite a while longer to put the next 5,000 miles on the odometer.

Several people have asked me how my daughter Tiffany and daughter-in-law Geli are doing with their health problems. I’m delighted to say that while Tiffany is still somewhat sore from all of the CPR and the two times they had to use the paddles on her to restart her heart, she is doing great since the defibrillator was inserted. And there does not seem to be any impairment from oxygen deprivation, which was a real concern if she did survive. We are still awaiting results on Geli’s biopsy, but keeping our fingers crossed and hoping for a good report.

Between putting out the July-August issue of the Gypsy Journal, having company from out of town, our week-long RV trip, and then going out of town again because of the medical things, it’s been two months since I’ve been able to do anything with my current work in progress, Big Lake Tragedy. The book is way behind schedule and I need to get it out, so I got back to work on it yesterday.

Usually I can jump right back into a book where I left off, but I’m having some difficulty doing that this time around. I managed to get about 1,200 words, but it was slow going. Hopefully I can get it flowing again soon. By this time last year I already had two books out and was well into the third of the five I put out by the end of the year. So far this year, it’s been just one book, and I’m going to have to hustle to make my goal of at least four new books by year’s end.

While I was struggling with that, Miss Terry was busy with all of the things she does to keep our home and business running that frees me up to write the books. It’s a partnership all the way between us, and truth be told, she’s usually the one carrying most of the weight. Well, the weight of the work. When it comes to carrying any other weight, I’ve got that down to a science.

Besides bookwork, and laundry, and everything else she was busy with yesterday, Terry also made some delicious made from scratch double crust chicken pot pies for dinner. Before we got together, I thought pot pies came from Banquet and were found in the frozen foods section of the grocery store. Boy, was I wrong! Those things taste like cardboard compared to what Terry creates. 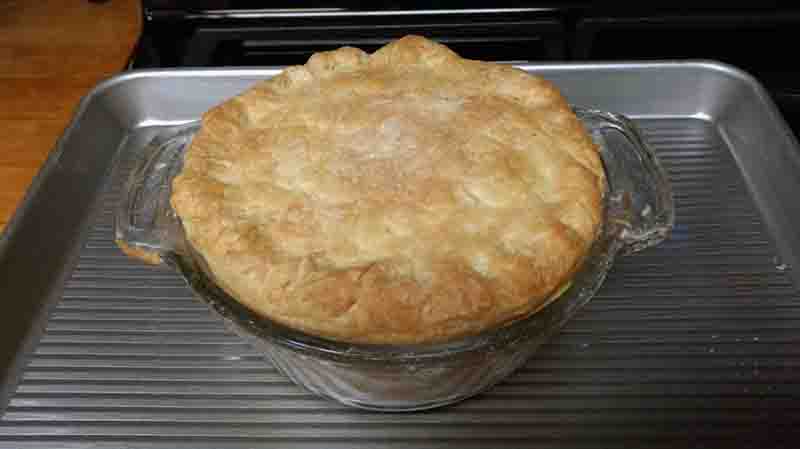 After reading yesterday’s blog, Not Yet, several people left comments or sent me emails about the frustrations they went through in selling an RV, or offered suggestions on other ways to market our motorhome. I appreciate all of your input. I did get inquiries from two other couples yesterday, and one of them is talking about flying in from Atlanta this coming weekend to take a look at it. Hopefully they will only buy one way tickets, so they can drive the Winnebago home.

Thought For The Day – Apparently putting Alka Seltzers in my mouth while getting baptized and pretending I’m possessed by the devil isn’t funny.