Nick's Blog » The Trip From Hell

Thank you to all of you who sent emails, posted blog comments or on Facebook wishing us well, offering to come to our assistance if necessary, and praying for our safety after my blog about our breakdown on Sunday.


Unfortunately, that wasn’t the last of our troubles on the Trip From Hell, but we are safe and doing as well as can be expected under the circumstances. Here is an update, and it’s a bit long.

After our 12 hour ordeal stranded on the shoulder of Interstate 10 in Mobile, Alabama on Sunday, we were back on the road Monday afternoon with repairs made. We made it a short day, about 60 miles or so to Campgrounds of the South in Gulfport, Mississippi. We have stopped at this very nice campground many times over the years. It is clean and well laid out, the owner and managers are always very friendly, and it is convenient to Interstate 10. We got a long pull through 50 amp full hookup site for just $23 with our Passport America membership. 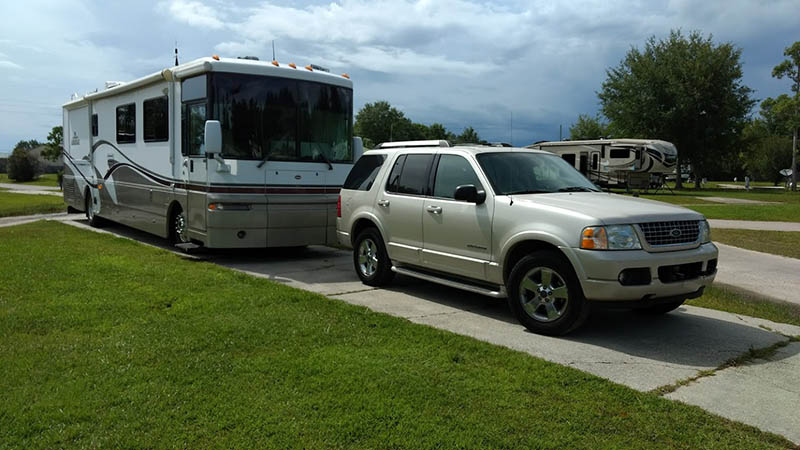 When we checked into the campground, the owner suggested we go to Island View Casino and take advantage of their two-for-one all-you-can-eat buffet, which included crab legs, shrimp, and lots of other goodies. That sounded good to us, and when we got to the casino we had to sign up for their free Players Club to take advantage of the buffet special. Once we did that we were directed to a nearby bank of machines to insert our brand-new players cards and see what we had won just for signing up. As it turned out, I won $10 in free slot machine play and Terry won $100. You couldn’t cash in those credits, they had to be played. Okay, let’s go eat and then we will blow through that money and go home.

The food was excellent and we both ate way too much, then we hit the slot machines. When it comes to slot machines I’ve always believed in making the maximum bet, so you can either win big or lose it all and get it over with. It didn’t take me long at all to lose it all. But not Miss Terry! She would play and win a little bit, then lose a little bit, but overall she kept winning. And by the time she had used up her $100 in free play credits she also had $50.65 in cash winnings. Okay, time to go home!

When we got back to the motorhome we had an unpleasant surprise waiting for us. The bedroom was flooded because one of the water hoses to our Splendide washer/dryer had ruptured. So much for taking a quick shower and going to bed. First we had to dry out the bedroom.

If we thought we had been jabbed enough by the fickle finger of fate, we were wrong. When we got ready to leave the next morning, the rear end of the motorhome would not air up again. At least that was a simple fix. The camp host’s husband crawled under the Winnebago, found a nut had come loose on the air level adjustment rod, and replaced it.

We stopped at the Flying J just 3 miles west to fill our tank, because besides the miles we had driven, we burned up a lot of fuel with the generator to keep the basement air conditioning going while we were broken down, and overnight while we were dry camping at the repair shop. We have used Flying J for years, and though it can be frustrating getting in and out of some of their RV fuel islands, overall we have had good luck with them. But I think we should have passed this location up.

A hard rain hit us just as we got back on the interstate but it didn’t last long, and soon we crossed into Louisiana. We hooked up with Interstate 12 and took it around the north end of Lake Pontchartrain and through Baton Rouge, crossed the Mississippi River, and reconnected with Interstate 10.

This took us over the Atchafalaya Basin Bridge, which is actually a pair of side-by-side bridges over the swampy Atchafalaya Basin. With a total length of 18 miles, it is the third longest bridge in the United States and the fourteenth-longest in the world in total length. You all know about my fear of high bridges, but these are low and don’t bother me. 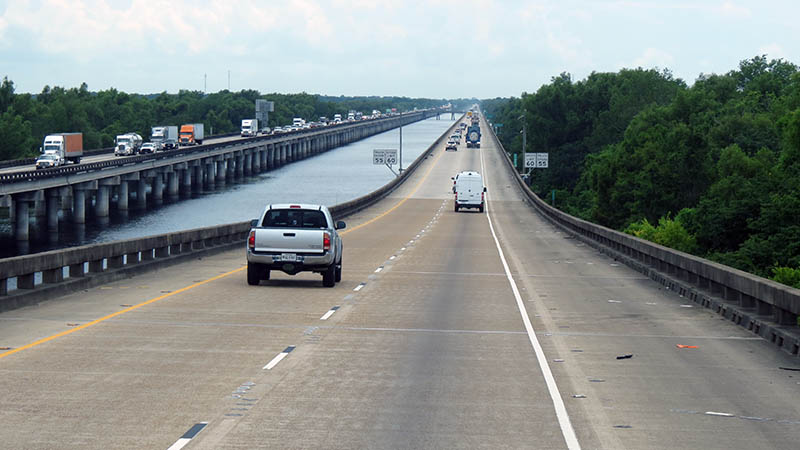 There was a lot of traffic going in both directions, but everybody was moving along just fine. 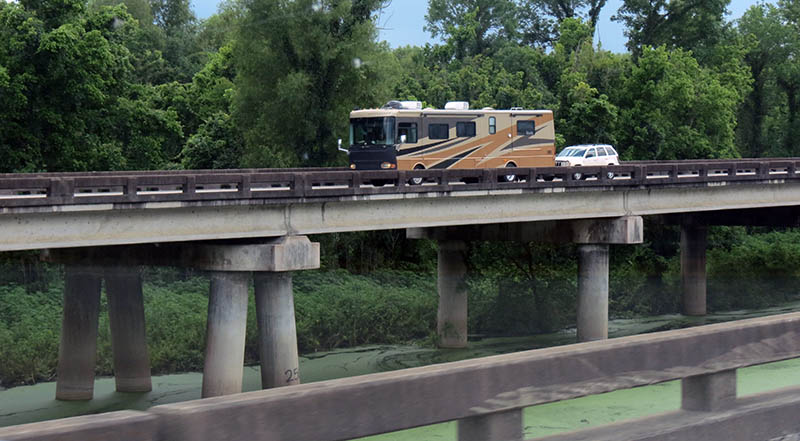 There’s a lot of water out there! 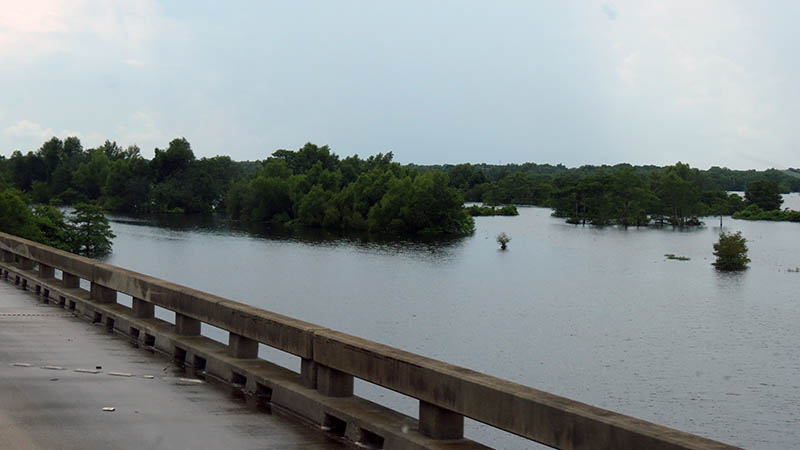 Interstate 10 in that area has a reputation as a rough road, and it certainly is in some stretches, but no worse than Interstate 20 through Shreveport, parts of Interstate 10 in east Texas, Interstate 40 across northern Arizona, and a lot of other roads we have traveled.

We’ve been across this route so many times over the years that we could do in our sleep, so we decided to do something different this trip. In Lafayette we got on Interstate 49 and took it north toward Shreveport, where Interstate 20 would take us west through Dallas and eventually reconnect with Interstate 10 in west Texas. At least that was the game plan.

Interstate 49 is a very nice road that goes through some beautiful countryside, but we didn’t get to enjoy it for very long because we had more troubles waiting for us. Suddenly our generator stopped working. I hit the button on the dash to restart it and it ran for about five minutes and then quit again. About the same time, the check engine light flashed on my dashboard and went off, and I felt some hesitation in the engine. If you’ve driven a vehicle as long as I have our Winnebago, you know its personality, and you know when something is wrong. Things cleared up for a little while, then the light flashed again and I felt the same roughness in the engine. And it continued like that.


About 50 miles south of Shreveport we pulled into Ajax Country Livin’ RV Park, a small mom and pop Passport America campground less than a mile from the interstate. We got a full hookup pull through 50 amp site and settled in for the night and to contemplate this new development. 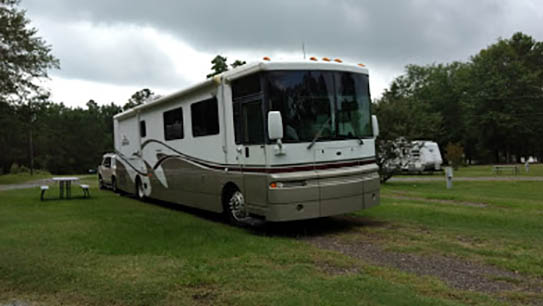 I use biocide religiously in the motorhome’s fuel tank, and while it was parked for the last seven months I gave it a double dose and filled the tank completely full to avoid condensation. Given that, and because the rig had run fine up until then, I suspected we had gotten some bad fuel at the Flying J back in Gulfport.

The next morning (yesterday) we drove 65 miles north to the Cummins shop in Bossier City, on the east side of the Shreveport metropolitan area. They checked the fuel filters on the engine and the Onan diesel generator and found a lot of water in the fuel. A lot of water! We knew that just changing the filters wouldn’t help us with that much water and also quite a bit of crud in the fuel. As it was, all we would have done was foul another set of filters. So they had to drain the tank completely, put in 10 gallons of fuel and some additive to help dry out the inside of the tank, and we were finally good to go.

The question was, where were we going to go? Terry and I were worn out physically, wrung out emotionally, and not having any fun at all. We looked at each other and asked, “What the hell are we doing?” Neither of us felt comfortable taking the Winnebago any further west at that point. It would probably run fine, but we just didn’t want to do it. All of the reasons that we decided to buy our house and get off the road fulltime came back to us. As I’ve said before, while we have always loved the destinations, we stopped enjoying the trips from Point A to Point B a long time ago. It just isn’t fun anymore. So we decided to turn around and go back home.

Our traveling days are not over, but it’s time to downsize. This is something we have talked about several times since getting the house, but even with all the problems that we had on this trip, we really like our Winnebago motorhome. We’ve customized it to fit our needs with two custom computer workstations, a custom-built table and bookcase, flat screen TVs, and a lot of other upgrades. It was a great rig when we were fulltiming, but it’s more than we need at this point in our lives. Sitting still for the last few months has not been good for it. I think we’ve got all the bugs worked out, but it’s now more than we need. I think we are going to look into a van or something like that for a future travels.

But first we are going to go home, take a long breath, get some rest after this hectic week, and then we will see what our next step is. We are fortunate in that we don’t owe very much on the rig and have quite a bit of equity in it, even at low Blue Book. So I think we can do pretty well in a trade in if it comes to that. Or, we may sell it outright if somebody comes along looking for just the right motorhome.

Thought For The Day – Nobody said life would be easy, they just said it would be worth it.

31 Responses to “The Trip From Hell”