Nick's Blog » They Did Make Trucks!

I can always trust my blog readers to set me straight when I make a mistake. Such was the case in yesterday’s blog, when I showed a picture of a Morris Minor pickup truck that I said someone had made from a car. Wayne Shunamon posted a comment saying that Morris Minor did indeed build trucks, and included a link to a bunch of photographs of them. Like they say, you learn something new every day and I stand corrected. Thanks, Wayne, I had never seen one before. And now I want one!


In yesterday’s blog I also mentioned doing genealogy research on ancestry.com, and about learning that my great-great-grandfather and his wife were killed by Indians according to some new information I just received. A reader wrote to ask me if I did not mean my three times great grandparents. No, I had it right the first time. I am my parents’ eighth child, the youngest, and the only one still alive. My father was born in 1909 and was in his mid-40s when I was born. His father, my grandfather, was born in 1873, and my great-grandfather born somewhere between 1825 and 1835 (the records I have found on him have both years on them) His parents, my two times great-grandparents, were the ones who were reportedly killed by Indians.

Besides the family research, which I really enjoy, as a writer I have found that genealogy is great for story fodder. For example, a while back I came across an old newspaper article saying that when my grandfather, Joseph Russell, was 16 years old, he jumped from the Cincinnati Southern Railroad bridge into the Ohio River near Ludlow, Kentucky on a wager. The fall was a distance 101 feet, and he was not injured in the stunt. Do you think that could have anything do with my fear of bridges?

Another story I found a few years ago was about one of my 1st cousins one removed or something like that, who was a bank teller in Ludlow, Kentucky about 1900. He discovered irregularities in the books, which led to an investigation that revealed the bank’s president had been embezzling funds. There was a big scandal and the president was fired and facing criminal charges. One day he accosted my relative on the granite steps outside the bank and began beating him with a walking stick. My relative pulled a revolver out of his pocket and shot him dead. Later in life he retired as president of the same bank. That’s one way to get ahead in your career!

Okay, enough family history for now. What else have we been up to? I wrote another 3,000 words in my new book yesterday, knocking off about 3:30 in the afternoon when our friends Charles and Chris Yust came to visit. They are the owners of C&C RV Insurance and they handle all of our insurance needs here at the Gypsy Journal, as well as for many fulltime RVers we know. Since Charles and Chris are fulltimers themselves, with somewhere around 18 years under their belts, they know exactly what RVers need. They have always taken very good care of us and have come through for us 100% when we needed them.

Chris brought some steaks that Miss Terry threw on the grill, and along with baked potatoes, asparagus, and some other goodies we had a delicious dinner. Then dessert was key lime pie and cheesecake. I’ll tell you right now, none of us walked away from that table still hungry!

After dinner we relaxed and talked about all the good times we have had together, life on the road as working RVers, our new to us house, and their upcoming trip to Alaska. When the four of us get together, there’s never a dull moment! 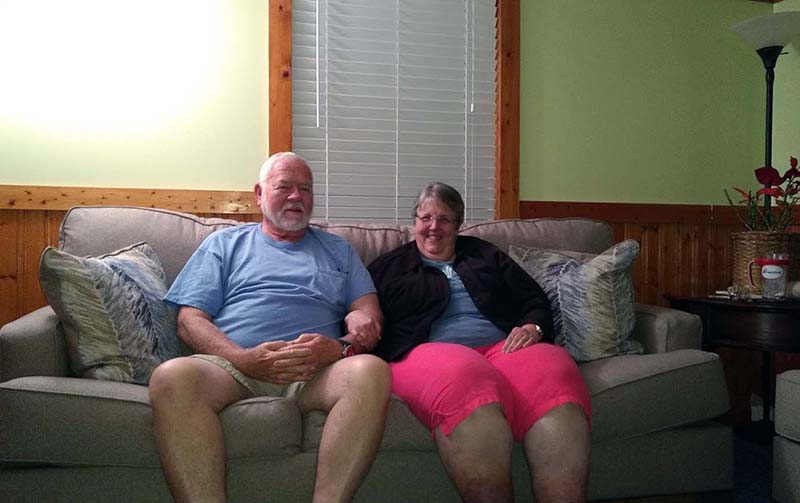 We had a good time visiting with Charles and Chris, and look forward to seeing them again. Hopefully we will be able to cross paths while Terry and I are in the Pacific Northwest this coming summer or early fall. We made a tentative date to meet at the Long Beach, Washington Thousand Trails preserve when they get back from their trip up north.


I’m not sure what’s on the schedule for today, we have a few errands we’d like to get done, and then probably more writing. Things are coming to a head in this book and I’m looking forward to seeing how everything works out.

2 Responses to “They Did Make Trucks!”