Nick's Blog » A Good Day On The Water

With my new book The Gecko In The Corner published and selling well, I decided I deserved a day off yesterday. So I celebrated by going fishing.


What’s wrong with this picture? While Miss Terry and I were getting the boat ready to go, our friend Jim decided to help out by putting the ball hitch into my pickup’s receiver. Jim is one of those guys who wore a helmet and shoulder pads to school, and he wasn’t on the football team. 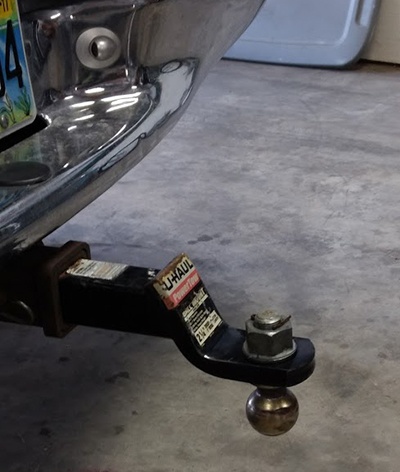 We fixed that little problem, got the boat hooked up, drove down to the launch and got in the water, then had a little trouble trying to get away from the dock because the wind was blowing from the east and it was pushing us back toward land. But once underway, we were fine.

One of our neighbors who has spent a lot of time fishing the local waters had told me that if we went north just a short distance and anchored near the big dock at the Boston Whaler boat factory, we would get into some pretty good fishing for sheepshead and reds. So that’s where we started out. Unfortunately, that same wind was enough to cause problems there and we kept dragging the anchor, taking us too close to the seawall.

So we decided to cross the river and go back south and anchor across from our own dock, where the mangroves would shield us from the worst of the wind. There is a little creek that comes out there and empties into the river and I’ve heard there was good fishing there, too.

At some point while we were down around Boston Whaler I lost power to my Humminbird fish/depth finder. That’s not a good thing, because the water around here can range anywhere from sixteen feet deep in the channel down to just inches. My Key Largo can handle two feet of water okay, but if it gets much shallower than that, things get a little dicey. I need to figure out what’s wrong with the unit before the next time we go out.

Things were a lot calmer at our new location, and we started getting bites and catching fish immediately. Most were small mangrove snappers that we returned to the water so they can grow up and come back again. But then Terry hooked this big boy. I thought it was a pompano, but later learned it is actually a jack. Whatever the heck it is, it gave her a bit of a tussle before she got it onto the boat. 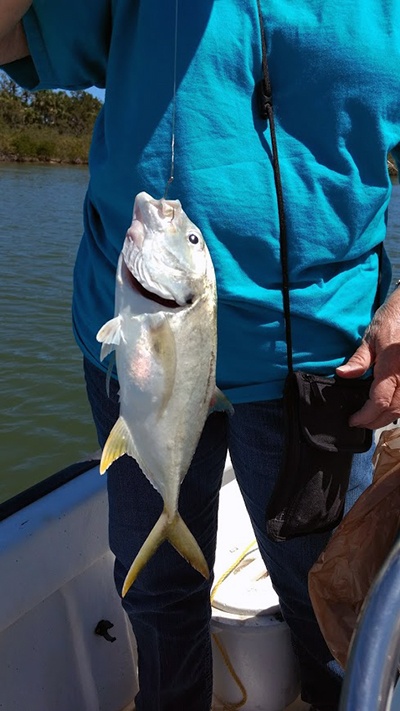 I was next up with a spotted sea trout, then a couple more snappers that were big enough to keep. I was busy getting a shrimp out of the bait bucket to hand to Terry when Jim yelled and I look to see my fishing rod bent over and a big fish jumping out of the water. It gave me a heck of a fight, but I finally got it to the boat, and just as Jim was getting ready to net it, the darned thing broke the line and was gone. But it wasn’t long before I got another good bite and reeled in a jack about the same size as Terry’s.

Meanwhile, Jim wasn’t having much luck. His new fishing reel was giving him problems and I think he spent more time fussing with that than he did fishing.

I got another hit and another strong fight, with the fish jumping out of the water several times before it managed to get off the hook. And when I put a fresh shrimp on and cast back out in the same direction I had another immediate hit. Snapper and sheepshead will play with the bait, bumping it several times before they actually bite, and if you’re not careful they will get your bait before you can set the hook. But whatever I was dealing with didn’t waste time with that. They hit hard and fought all the way.


Finally I managed to get one onto the boat, and it turned out to be a lady fish, also known as a Spanish hog fish. Some people call them the poor man’s tarpon. They are very oily and not good to eat, but when cut up they make excellent bait for other game fish. I wouldn’t mind catching a few more of those just for the fun of the fight and to watch them jump. Here is a link to an online article about them.

Eventually we ran out of bait, and the fish didn’t seem to be interested in any of the artificial lures we were throwing at them, so we called it a day. We crossed the river back to our dock and Jim got off the boat and went to get the pickup and back the trailer down the dock so we could load up. Terry and I moved back out into the water a bit, and once he had the trailer positioned I tried a trick our neighbor Curtis King taught me. I trimmed the motor up to raise the propeller a bit and aimed the boat at the trailer and drove it right out of the water and onto of the trailer. That was fast and easy! Unfortunately I didn’t get it all the way forward and we had to winch it the last few inches, but it was still a lot easier than winching it all away on like we have done.

Here is a photo of the fish that were big enough to keep that we brought home with us. The two on the top right are snapper, the third from the top right is a spotted sea trout, top left is a ladyfish, and I don’t remember the name of the one under it, but I think it was Bill or George, or something like that. The two with the yellow fins on the bottom are what I thought were pompano but I have now been told are jacks. They are close cousins and both are considered to be good eating.

If you catch them you have to clean them. Jim and I practice filet and release fishing. 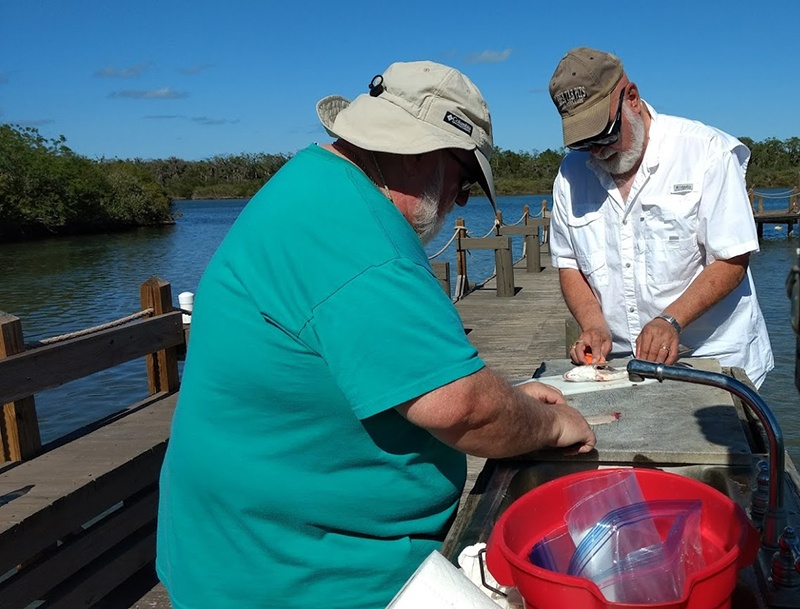 I love my job, but they say that the worst day fishing is still better than the best day working. I don’t know about all of that, but we darned sure had a good day fishing!

Thought For The Day – Nothing makes a fish bigger than almost being caught.

One Response to “A Good Day On The Water”