While wandering through the City Cemetery in Mishawaka, Indiana we came across the story of Charles Cleveland Boyd, a hardworking man with little tolerance for nonsense.

Born in eastern Tennessee on December 20, 1805, Boyd was a giant of a man, tipping the scales at 320 pounds and towering head and shoulders over most men around him. About 1837 or 1838, Boyd brought his wife and four children with him to Mishawaka, in the northwest corner of the state. Accompanying them was a widowed freed slave and her son, who worked for the Boyd family.

The trip by wagon train pulled by oxen was arduous, and their heavily laden wagons became mired in the treacherous Black Swamp. If not for Boyd’s amazing physical strength, they might never have managed to get free of the muck that sucked their wagon wheels down.

Arriving in Mishawaka, the Boyd family set up housekeeping and Charles Boyd opened a blacksmith shop. His hard work, craftsmanship, and honesty soon made him a popular and successful businessman.

This area was still wild frontier in the mid-1800s, attracting all manner of adventurer, fortune hunter, and more than a few misfits. While the good citizens of Mishawaka worked hard to establish a community, the rough crowd who shared the area with them were not overly concerned with the niceties of polite society.


One local crowd of rowdies had obtained a small cannon from the St. Joseph Iron Works and were fond of firing it during Sunday morning church services, disrupting the worshipers. James Boyd was a staunch Methodist, and Methodists take their religion very seriously.

One Sunday morning, the congregation was in the middle of their worship services when the cannon roared nearby, causing women in the church to shriek and babies to wail. From outside came the sound of uproarious laughter from the pranksters. Eventually the din died down and the church services resumed, only to be disrupted again when the cannon blasted once more.

While mothers tried to comfort their frightened children and the parson called for the congregation to be calm, James Boyd slipped quietly out of his pew and left the church. He strode down the street to his blacksmith shop, where he picked up a rat-tail file and a small sledge hammer.

The crowd of hell raisers suddenly grew sober when they saw the big man approaching with the hammer dangling from his hand. Boyd never said a word, but the crowd parted before him like the waters of the Red Sea before Moses. The blacksmith stuck the file into the wick hole of the cannon, and with one mighty blow from his hammer drove it home, rendering the artillery piece useless. Then Boyd looked each man in the eye, waiting for anyone to object. The mob may have been uncouth and rude, but not one of them was stupid. The held their silence and stepped aside again to allow Boyd to return to his church services. From that day onward, the congregation worshipped in peace.

Later in his career, Charles Boyd made quite a name for himself building freight boats for use on the St. Joseph River between Mishawaka and Three Rivers, Michigan. The venture was very successful, and because of his boats and freight routes, folks began fondly calling him Commodore or Admiral.


The arrival of the railroad in 1850 was a disaster for Boyd’s boat building and freight enterprises. Hoping to recoup his good fortune, he traveled west to the California gold fields, but the riches he hoped for eluded him. He returned to Mishawaka and spent the last years of his life as a farmer. Though never as successful later in life as he had been in his early days in Mishawaka, Boyd remained a popular and well respected member of the community until his death on August 24, 1879.

Be sure to enter our latest Free Drawing. This week’s prize is an audiobook of The Music Box by Heather Meyer. It’s the story of a young woman scarred by her father’s suicide on her fourteenth birthday and struggling to accept why it happened. She escapes the city and settles in a small town to write his story and meets a young man struggling to come to grips with his own father’s legacy. It’s a story you won’t soon forget. To enter, all you have to do is click on this Free Drawing link or the tab at the top of this page and enter your name in the comments section at the bottom of that page (not this one). Only one entry per person per drawing please, and you must enter with your real name. To prevent spam or multiple entries, the names of cartoon or movie characters are not allowed. The winner will be drawn Sunday evening. 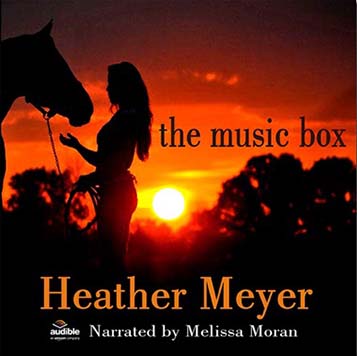 Thought For The Day – Old age is when the liver spots show through your gloves. – Phyllis Diller

One Response to “The Blacksmith Goes To Church”