I spent many of my years living in the southwestern part of the United States, and I learned that when you wanted something done there and called any kind of repairman or service person, they all operated on Mañana Time. I was talking to a friend once who lived down in the Florida Keys, and he said the same phenomena there is known as Island Time.


No matter what you call it, it all comes down to the same thing; people work at their own schedule, and just because they promised to show up at the specified time doesn’t mean they’re really going to do that. They could be anywhere from a couple of hours to a couple of weeks late, if you ever hear from them at all. I don’t know what we call it here on the East Coast of Florida, but it seems to work the same way.

There are a couple of places in the steel frame of our garage that have been damaged by the salt air and need to be replaced. I inquired about mobile welders in a local Facebook services group and one fellow contacted me and said he could handle the job easily. He was supposed to come the next morning at 11:30 to look at it and give me an estimate, but he never showed up. At 1:30 I texted him and he said he would be there at 3:30, and eventually he showed up about 5:30. He looked at what I needed done and said yeah, no problem, piece of cake, it was a quick and easy repair. He said he would need half down to get the materials he needed for the repairs. I told him that was no problem, but when I inquired when he could actually do the work, he wasn’t sure. Next week is Bike Week in Daytona Beach and he didn’t want to miss that. Then he had some friends coming down for a while, so it would be after that, but he didn’t know when they were going to get here, or how long they would be staying.


Realizing that was not going to work out, I replied to another mobile welder who had contacted me in response to my Facebook query. He was supposed to call me Friday to set up a time to come out on Saturday, but he never did. Then at 2 AM Saturday he texted me to say his phone had died and he just got it working, and he would come out Saturday afternoon between 3 and 5. We had plans, but changed them to be here, and he never showed up. At 6 I texted him to ask if he was still coming and he said he got hung up on another job and would be here the next day between 9 and 10 AM. And again, he never showed up, never called, and at noon we left to do something. At 4 PM he finally texted me and said he had gone to Orlando and forgotten about me, but could come by in an hour. I replied no thanks, if you can’t give me the courtesy of either showing up on time or at least letting me know you’re not going to make it when you’re trying to get my business, what’s it going to be like after you have it? I’ll keep looking. There must be somebody around here who needs the work bad enough to show up as promised.

I have mentioned a couple of times that a pair of osprey have a nest near us, and for the last few weeks we have been watching them coming and going, caring for their eggs and then feeding their hatchlings. This led to my encounter with a flying fish that I wrote about in a blog post a couple of weeks ago.


Now the hatchlings are testing their wings and flying themselves, and it’s been fun watching them. I think a lot of people here in our little manufactured home community have kind of adopted them. Here is a picture I took of either Mama or Papa Osprey perched on the top of their tree keeping an eye out for trespassers. If you look toward the bottom of the picture you can see the nest with another osprey in it. 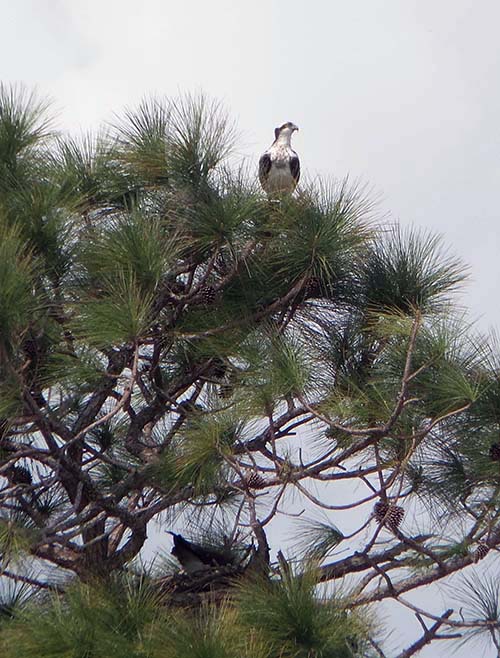 In a blog about RV tires a few days ago, I mentioned my friend Roger Marble, who runs the RV Tire Safety blog. When I have questions about tires, Roger is the guy I go to. I didn’t know at the time that due to some problem in renewing the blog, it’s web address had changed. The new address is www.RVTireSafety.net. Check it out. Roger is a retired tire engineer and the man really knows his stuff. I’ve learned a lot from him over the years.

Thought For The Day – Sometimes the best lesson is to do yourself a favor and learn how to walk away.