No, I haven’t been a very bad boy who deserves punishment. Well, at least, no worse than normal. And no, Miss Terry and I have not been doing anything kinky involving whips and things like that. I’m talking about paddling our Sea Eagle kayaks.


One of the things that sold us on our house is the fact that we are only 800 yards from our little community’s private boat launch and fishing pier on the Indian River. We love everything about being on or near the water, from fishing and boating and kayaking, to just sitting and watching the passing boats and the dolphins who come by to say hello every day. But we’ve been so busy with everything else that we just haven’t had as much time to enjoy it all as much as we have wanted to. In fact, we had not been able to use our inflatable kayaks in so long I was afraid they thought we had forgotten all about them. So yesterday afternoon when Terry suggested we get them in the water, I was quick to agree.

A week or so ago we had inflated them, just to be sure they would still hold air, though I don’t know why I was worried about that. Sea Eagles are not cheap toys, these things are just about indestructible! The kayaks are big. My PaddleSki 435 is 14’6″ long and 39″ wide when inflated, and Terry’s 385 FastTrack is 12’6″ long and 36″ wide, so I wasn’t sure how well they would fit in the back of our short bed Ford pickup. But standing on their sides with the tailgate down, they rode the short distance down to the water just fine.


While we have a paved boat ramp, we opted to launch them from a sandy area beside it. My boat is on the left in this picture, and Terry’s is on the right. 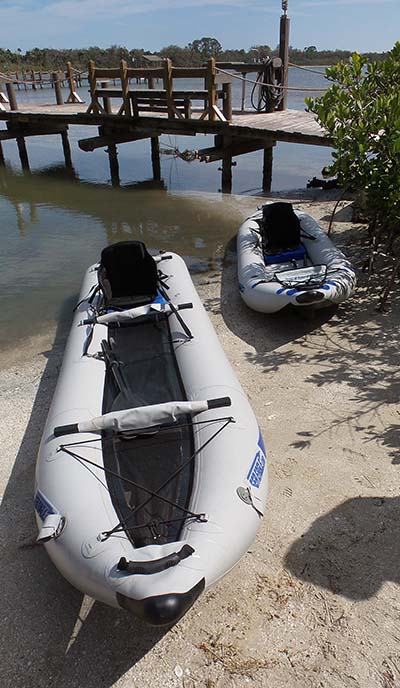 The water is pretty shallow around our dock and all the way out to the channel on the far side of the river, and the tide was really low. But that didn’t matter, the kayaks float in only a couple of inches of water, so we had no trouble.

Our friend Jim Lewis came down to check out the boats and take some pictures. I think Tim and Crystal Ryerson from Inflatableboats4less may be getting a call or two, because it seemed like everybody around the dock wanted to know what those strange looking boats were and asked questions about them. Folks are always impressed with the Sea Eagles wherever we go.


There was a stiff breeze blowing, and it took me a couple of minutes to get a feel for the kayak again after not using it in so long, but they handle so well that it didn’t take us long at all to zip across the water to a mangrove swamp on the other side of the channel. 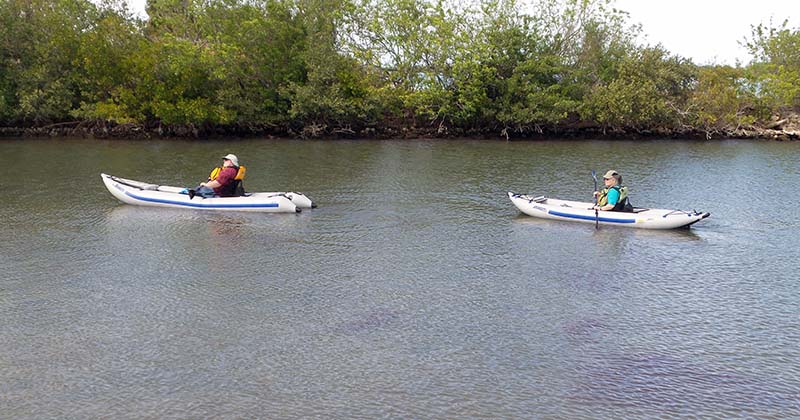 Can you tell how happy Terry is to be paddling on a beautiful winter day in Florida? 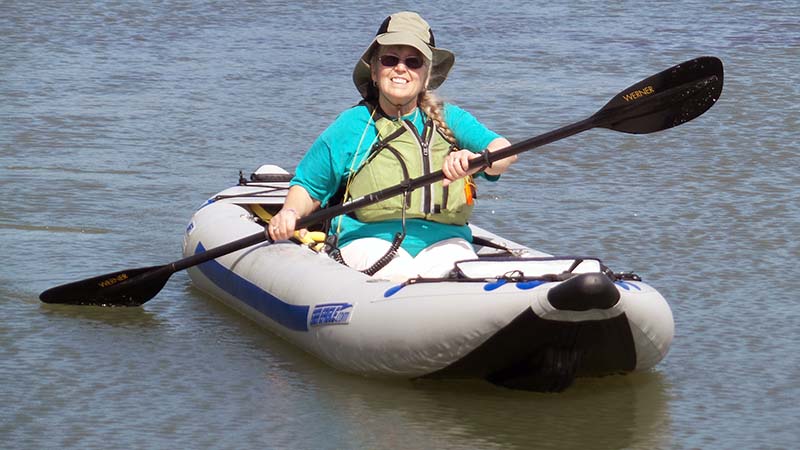 The Indian River is also part of the Intercoastal Waterway, a 3,000-mile long inland waterway along the Atlantic Ocean and Gulf of Mexico coasts from Boston, Massachusetts down to and around the southern tip of Florida, and then along the Gulf Coast to Brownsville, Texas. And while much of the water around here is very shallow, the dredged channel is anywhere from 10 to 20 feet deep.

This is a no wake zone because of all the manatee, but there are always a few idiots who think the rules don’t apply to them. When we were on the far side of the channel, one of them in a center console boat came by heading north at high speed, throwing up a big wake. We have had hard kayaks, and every time a boat threw a wake up it got pretty bouncy waiting for it to pass. Not so with the Sea Eagles. We pointed the bows toward the oncoming wake and hardly noticed it.

I wanted Jim to try the kayaks out and see what he thought of them because his previous paddling experience had been in a canoe. So we crossed the water again and he took off in my PaddleSki with Terry keeping him company. 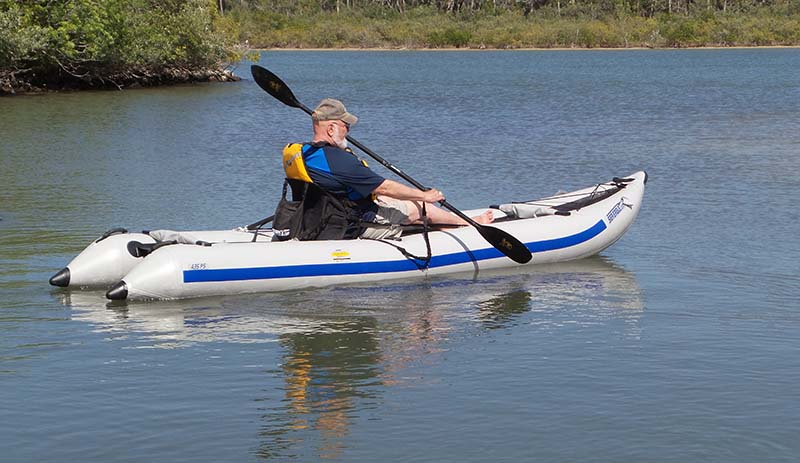 And then he tried out her FastTrack. The way the seat was adjusted in my boat didn’t fit him very well, but he really liked Terry’s. He said the same thing that everybody does once they paddle a Sea Eagle, there was no comparison to anything else he had ever been in. 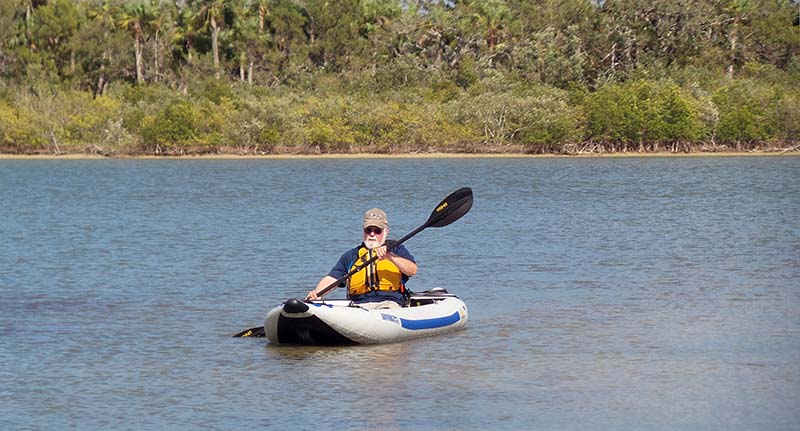 We are looking forward to many more paddling adventures here, and getting to know the local waterways better. There are a lot of places that we can go in the kayaks that we can’t in my 16 foot Key Largo.

All of that activity helped us work up an appetite, so once we had the boats washed off, took them home, and put them back in the garage, we went to Alberto’s for a nice Italian dinner. Then it was back home to throw some darts, and after Jim left, Terry and I spent a couple of hours watching television before it was time to write the blog and call it a day.

Over 170 people have entered our latest Free Drawing, and with a prize like we’re offering this time around, I’m not surprised. This week’s prize is a USB flash drive with all of the digital issues of the Gypsy Journal from 2003 through 2016. That’s 14 years, or 84 issues. If each issue was purchased individually it would be over a $250 value! That’s enough to keep you reading forever! We weren’t quite as refined with the earlier issues – the photos are black and white and they don’t have a searchable table of contents, but there is still a wealth of RVing information in them. To enter, all you have to do is click on this Free Drawing link or the tab at the top of this page and enter your name in the comments section at the bottom of that page (not this one). Only one entry per person per drawing please, and you must enter with your real name. To prevent spam or multiple entries, the names of cartoon or movie characters are not allowed. The winner will be drawn Sunday evening. 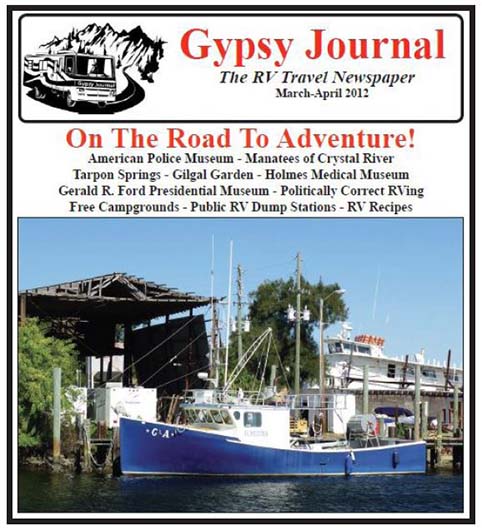 Thought For The Day – Losing is a learning experience. Strength does not come from winning at everything.