Note: This story was in the September-October, 2007 issue of the Gypsy Journal.

Located alongside busy Interstate 90 at the far eastern edge of Wyoming is a little-known archeological site that is well worth the time for a visit. The Vore Buffalo Jump is one of the most important archaeological sites of the Plains Indians culture.


Discovered during the construction of Interstate 90 in the early 1970s, the Vore site is a natural sinkhole that was used as a bison trap by five or more tribes from about 1500 to 1800 A.D. Indians drove buffalo over the edge of the precipice to harvest the large quantities of meat and hides needed to survive the harsh prairie winters. During that time, as many as 20,000 bison were killed and butchered here.

The culture of the Plains Indians depended upon the great bison herds that roamed the grasslands of western North America. The buffalo provided the Indians with food, clothing, shelter, tools, and implements. 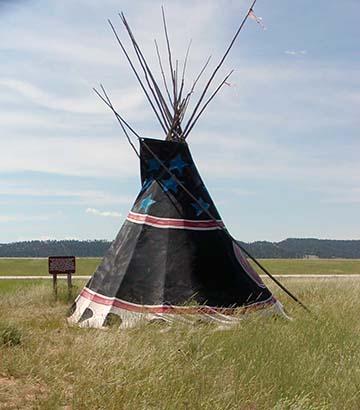 A successful buffalo hunt required participation from almost every member of the tribe. Men would stampede the buffalo toward the sinkhole, while women waved branches and animal skins to help herd the animals into a narrow passage of rock toward the hole’s edge. Once the animals plunged over the rim, other tribal members waited below to finish off the injured ones and start the butchering process.


The Indians worked on an assembly line process, skinning the animals, cutting the meat away, and hauling hide, meat, and bones to the top of the sinkhole. There are hundreds of buffalo jump sites across the West, and tribes would rotate to different ones as they followed the buffalo herds.

After a successful hunt, a jump could not be used for several years until the smell of blood has dissipated, or it would warn the animals away. So important were the buffalo, and the need for a successful harvest, that researchers tell us that though some tribes might be at war with each other, they would set aside their differences long enough to work together during hunting season.

The Vore family homesteaded in Wyoming’s Redwater Valley in the late-1880s. When the route for Interstate 90 was surveyed across the southern portion of the Vore ranch, the original plan was to fill in the sinkhole and pave over it. But when engineers drilled holes in the bottom to determine the hole’s stability, they discovered large quantities of buffalo bones. A decision was made to reroute the highway south of the sinkhole and to notify archaeologists from the University of Wyoming that a cultural site of unknown size and importance had been discovered.

Initial excavations in the summers of 1971 and 1972 proved that the Vore Site was massive. Bone and crude stone implements extend throughout the sinkhole, which is almost 200 feet in diameter. In 1989 the family of Woodrow and Doris Vore donated the land to the University of Wyoming.


The Vore Buffalo Jump features enormous quantities of bone and stone artifacts that are perfectly preserved in layers of sediment and held in place within a natural bowl. Scientists can use carbon dating and other methods to determine the dates of jumps held here. The sinkhole was used so extensively that the layers of bone and sediment extend over twenty feet below the surface! Within the site are the butchered remnants of as many 20,000 bison, as well as thousands of chipped stone arrow points, knives, and other tools. 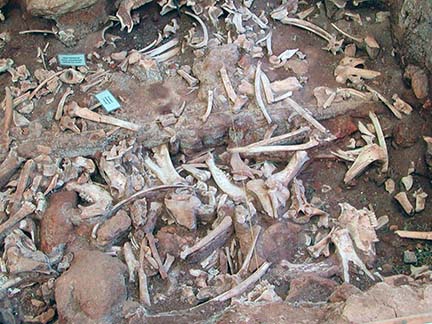 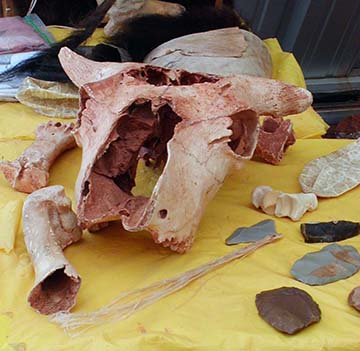 To date, only a small percentage of the Vore Buffalo Jump has been excavated, and there is much left to do. Future plans call for an interpretive Visitor Center that will have exhibits on the relationship between Plains Indian culture and the great bison herds that once roamed the Great Plains.

Visitors can take a guided tour of the site, including a walk down a gravel path to the bottom of the sinkhole, where a layer of bones have been uncovered. Guides explain the history of the site and how the Indians depended on the buffalo for their very survival. The walk back up is a bit steep, and those with physical limitations might find it too strenuous. 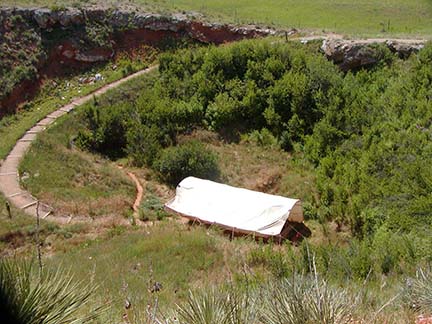 The present site has a small parking area that is suitable for passenger cars, but not RVs. The road in front of the site is very lightly traveled, and during our visit two trailers were parked on the shoulder, allowing what little traffic there is to pass with no problems.

So far, over 150 people have signed up for our latest Free Drawing. And I’m not surprised because we’ve got a great prize this week. Jim O’Briant has donated a one year subscription to www.OvernightRVParking.com. This is a great resource for RVers, listing well over 13,000 free places where you can park overnight. It’s a $24.95 value and it could be yours free if you’re our lucky winner. To enter, all you have to do is click on this Free Drawing link or the tab at the top of this page and enter your name in the comments section at the bottom of that page (not this one). Only one entry per person per drawing please, and you must enter with your real name. To prevent spam or multiple entries, the names of cartoon or movie characters are not allowed. The winner will be drawn Sunday evening.

Thought For The Day – Nobody said life would be easy. They just promised it would be worth it.