When we called Lowe’s last week to report that the oven light in Terry’s new Samsung stove had gone out the second time she used it, they said they would send a repairman out on Friday. But Thursday afternoon he called to say that there was a scheduling conflict and he wouldn’t be here until Wednesday (yesterday) of this week. He was scheduled to be here between 1 and 3, and actually showed up half an hour early.

Unfortunately, the problem isn’t the light bulb, since a replacement doesn’t work either and there doesn’t seem to be any power to the socket. So he is supposed to be coming back today. They’d better get it fixed pretty soon, because Terry is about ready to call Lowe’s and tell them to come pick it back up.

Except for poking my head into the kitchen while the repairman was here to see what was going on with that, I spent most of the day at my computer. I was working on formatting the print editions of my last four books, Big Lake Abduction, Big Lake Celebration, Return to Dog’s Run, and Stillborn Armadillos. The first book, Big Lake Abduction, came together pretty easily.

Then, when I started on the second one, Big Lake Celebration, I began having problems with InDesign, the page layout program I use for my books and for the Gypsy Journal. It kept changing the fonts on the page, making the size either smaller or larger at random. I found that I had to lay out two or three pages and then save everything before proceeding, or else the type size on the pages I had already done would change. That slowed me down quite a bit, but I eventually got it done.

Then, when I started on the third book, Stillborn Armadillos, it seemed like the gremlins had taken total control of the computer and nothing would work right. The type size kept changing, the text would not flow from page to page, or else it would create a blank page in between two pages of type. I tried everything from closing the program down and restarting it to actually shutting the computer down and rebooting, and nothing seemed to work. I kept at it until dinnertime, and finally called it day, drowning my sorrows in some of Miss Terry’s delicious lasagna. I’ll get back at it today and see what I can come up with.

A while back I told you that our friend Jim Lewis was visiting us from Mission, Texas. I guess Jim must have liked what he saw, because he was only here a few days before he bought a home just down the street from us! How cool is that? He doesn’t close until February 1, so he made a quick trip back to Mission, stuffed a U-Haul full of his worldly possessions, and he’s back and staying with us until he closes. Some people couldn’t handle having company that long, and there are not many people that Terry and I could tolerate staying with us that long, either. But Jim is an exception. He and I go back about 30 years and we are closer than brothers. We’ve seen each other through a lot of hard times, and shared plenty of good ones, too, and we’re looking forward to having him as a neighbor.

While living at Pleasant Valley RV Resort in Mission, Jim got into playing darts and introduced Terry and I to the sport. So every day we’ve been playing a few games on the dartboard in our garage. And so far, Terry and I have lost every one of them. This guy is good! But unfortunately, he’s a bit of a show off, too.

We were playing the other day and I managed to make what is known as a Robin Hood, where you stick one dart into the back end of another one already on the board. I didn’t plan to do it that way, it just happened. 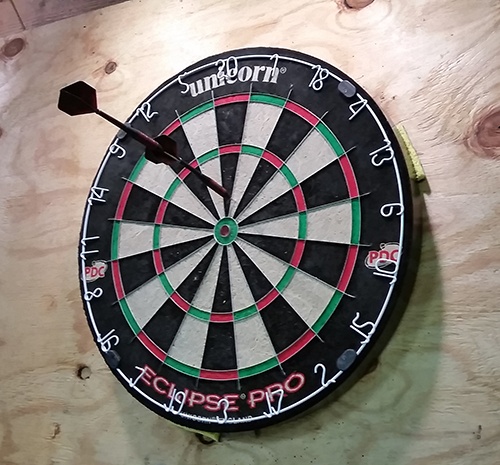 I was feeling pretty good about that accomplishment until the next round, when Jim did the same thing. Except that his group of three darts were much closer together than anything I could have thrown. 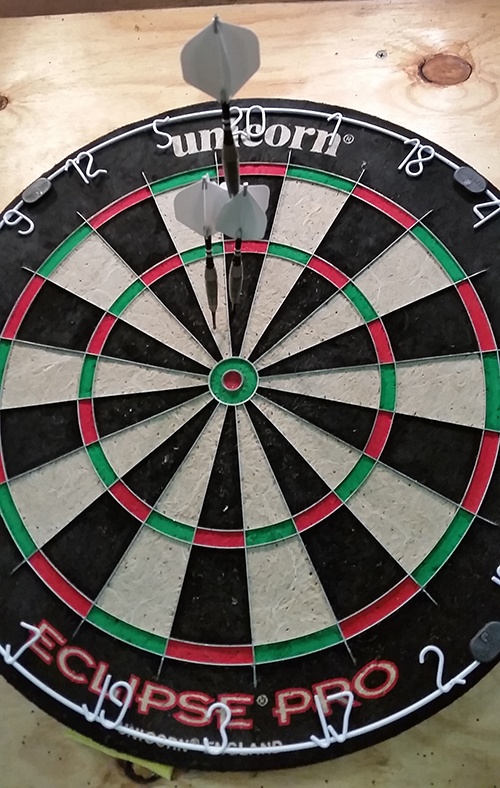 And I’ll be darned if he didn’t do it again on the next round! That’s right, he got two different Robin Hood’s in one game! No wonder Terry and I can’t win against him. I consider it a success if I can just hit the dartboard at all, instead of the wall around it. 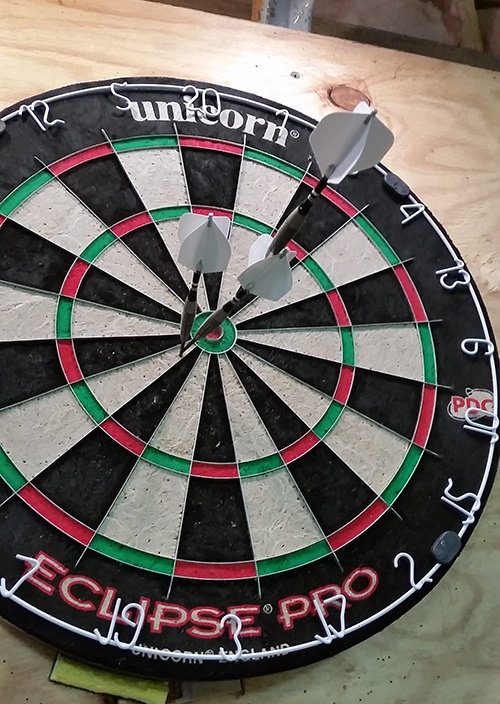 It’s Thursday, so it’s time for a new Free Drawing. And we have a great prize for you this time around! Marianne Edwards from Boondockers Welcome is donating a membership for this week’s lucky winner. That can save you a ton of money in your RV travels! To enter, all you have to do is click on this Free Drawing link or the tab at the top of this page and enter your name in the comments section at the bottom of that page (not this one). Only one entry per person per drawing please, and you must enter with your real name. To prevent spam or multiple entries, the names of cartoon or movie characters are not allowed. The winner will be drawn Sunday evening. 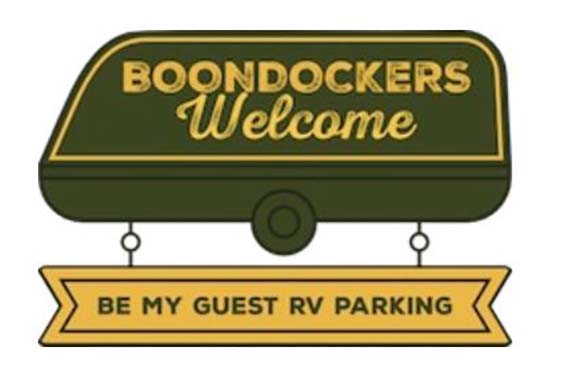 Thought For The Day – The best way to get on your feet is to get off your butt.

3 Responses to “Show Off”