Note: This story appeared in the July-August 2012 issue of the Gypsy Journal.

For a small town, Larned, Kansas has a lot to offer visitors, including the Central States Scout Museum and Fort Larned National Historic Site, both of which we have featured in the Gypsy Journal. Another stop worth making in Larned is the nationally acclaimed Santa Fe Trail Center Historical Museum and Library.


Here visitors will find an impressive collection of over 35,000 historical and archeological artifacts related to the Santa Fe Trail era, early Pawnee County, Kansas, and settlement in the early 1900s.

Displays include Native American artifacts that range from headdresses and drums to pottery and baskets, exhibits on the buffalo, which played such an important role in the life and culture of the Plains Indians, and how the arrival of the white man changed their world forever. 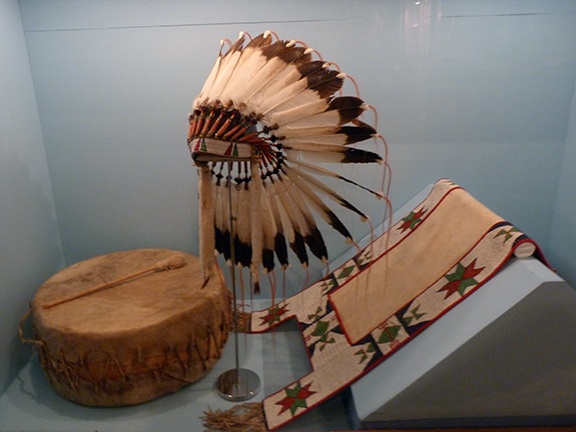 The great era of the Santa Fe Trail began in 1821, when Mexican independence from Spain opened up new trade opportunities for American and Mexican merchants. The Santa Fe Trail was primarily a trading route, and the museum has an exhibit of wagons of the type used to transport goods along the Trail. Pulled by oxen and mules, these commercial freight wagon trains crossed the plains until the railroad arrived near Santa Fe in 1880. 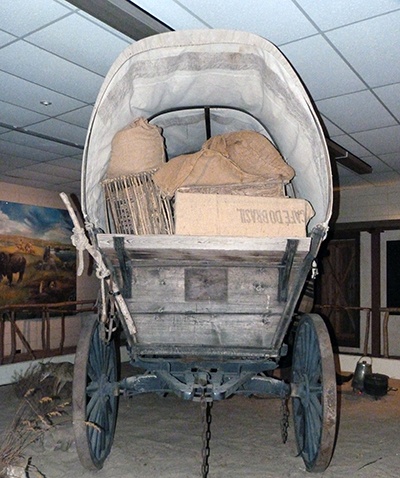 Unlike the other great Western trails, the Santa Fe Trail was a two way route between two different countries: the United States and Mexico. By the early 1840’s, the majority of private freight caravans were owned and operated by New Mexicans. The Mexican War ended the international days of the Trail, when New Mexico was added to the U.S. territory.


The Plains Indians resisted the growing number of trespassers across their land, and attacks became frequent, requiring the intervention of the United States Army, and the military comprised a major portion of traffic on the Santa Fe Trail. A restored Army escort wagon is included in the museum’s exhibits. 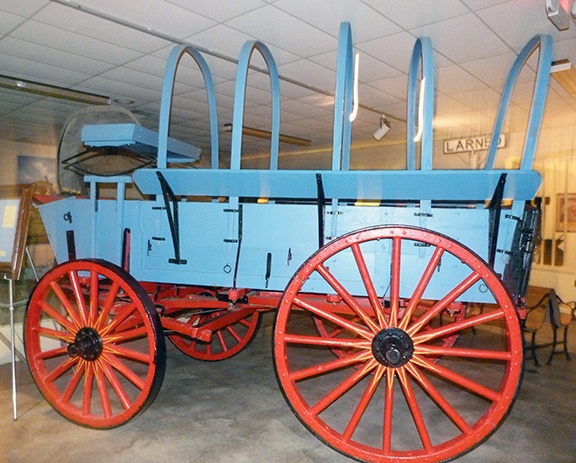 The museum has an impressive collection of historic firearms showing the progression of weapons technology from flintlock to cartridges.

As the railroad tracks moved further west, they ended the freighting days of the Santa Fe Trail, and towns and farmsteads grew up in its wake. Settlers followed the traders, and the museum has a large collection of settlement artifacts including farming, business, household, and recreational items. A number of exhibits depict the lives of the settlers who built a civilization on the harsh and wild prairie.

The Santa Fe Trail Center’s archives include over 7,000 photographs and 2,300 Glass Magic Lantern slides, as well as manuscripts and diaries, school and voting records, and papers from businesses and organizations. Also included are the Pawnee County and Santa Fe Trail Association records.


A small, but impressive research library is available for people wishing to find additional information about the Santa Fe Trail. It is also an important resource for genealogical research on early families in Pawnee County. The library houses published materials related to the Santa Fe Trail, Kansas history, and the American West. The museum owns the War of Rebellion series, a collection of the official documents from the Civil War. Books and materials cannot be checked out, but reading on-site is encouraged. The Center’s library and archives are free and open to the public from 9:30 a.m. to 4:30 p.m. during regular Center hours.

In addition to the museum and research library, a collection of historic buildings has been moved to the ten acre Santa Fe Trail Center complex. These include a typical settler’s sod house, the CME Escue Chapel, which was built in 1906 in Larned, a circa 1870 cooling house used to store meat and dairy products, and the 1929 Frizell Depot, built for the Atchinson, Topeka, and Santa Fe railway.

There is also a re-creation of a pioneer dugout, usually the first shelter made by newcomers to the prairie.

The one room L’Dora School, built in 1906, was moved to the Center from Frizell. Fans of the old television series Gunsmoke will be interested to note that actor Milburn Stone, who played Doc Adams, was a student at the school when he was a child.

The Center is also home to the Dale & Melba Woods Farm & Auto Museum, which houses a collection of antique cars, trucks, tractors, and other farming equipment. These include combines, threshing machines, and plows.

The main museum is handicapped accessible, but the other buildings and grounds could be difficult for those in wheelchairs.

The Santa Fe Trail Center is located at 1349 State Route 156, two miles west of Larned. The Center is open from 9 a.m. to 5 p.m. seven days a week between Memorial Day and Labor Day. It is closed on Mondays from Labor Day until Memorial Day, as well as Thanksgiving, Christmas, and New Year’s Day. Admission is $6 for adults, $3 for students age 12-18, $2 for children 6-11, and age 5 and under are free. There is room on the museum grounds for RVs to park while visiting, and free WiFi service is available in the lobby. For more information, call (620) 285-2054 or visit their website at http://santafetrailcenter.org/

Thought For The Day – He who laughs last thinks slowest.