Or, at least we think it’s solved.

As I wrote in my blog post Drenched in Yamaha Pee, a few days ago we took my boat out for its first ride and the engine kept cutting out. My first thought was that we were running out of gas, even though the gauge said full and the dealer had assured me that he had filled the tank before we took it home. (As it turns out, boat dealers and RV dealers will both lie to you.)


We were prepared for that and I had brought along a two gallon can of gas. But we could only get a little bit into the built-in tank before it was overflowing out the neck. So apparently that wasn’t the problem. We managed to limp home, and different people offered different suggestions as to what the problem might be; everything from bad gas to a loose fuel line, or that the gas tank wasn’t venting properly, which could cause a vapor lock.

I bought some Starbright fuel additive, which is supposed to take care of the gas problem, we made sure the fuel line was attached properly, and we couldn’t find anything wrong with the cap that would indicate the vent in it was clogged. So yesterday, our neighbor Curtis King, who used to operate tour boats on the Erie Canal and has done a lot of boating here on the Intercoastal Waterway, offered to go for a ride with us to show us some of the local waters and point out where some of the best fishing was, and the places to avoid because of the shallows.


Curtis had talked me through the procedure of how to launch the boat by backing down the ramp and then hitting the brakes, causing it to float off the trailer. Terry was on the dock, holding a line secured to one of the boat’s cleats, and it was a simple task to pull it up to the dock while I parked the truck and trailer. 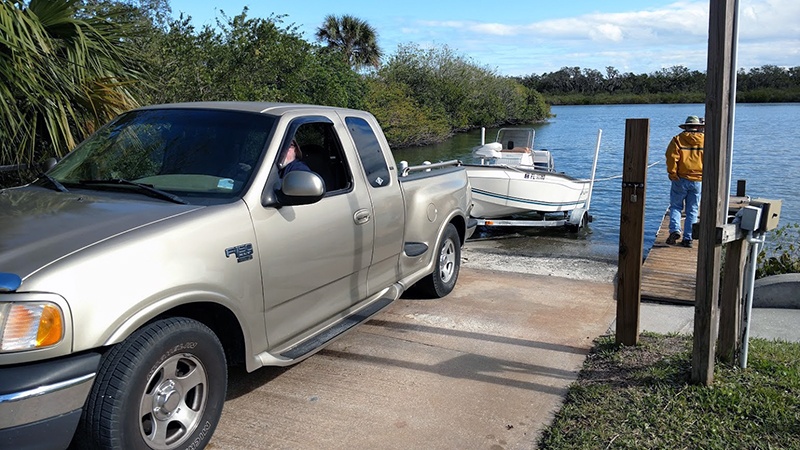 I got on the boat and Curtis gave us some last-minute instructions on how to best clear the shallow water near the dock and get out to the deep water channel of the Intercoastal Waterway. 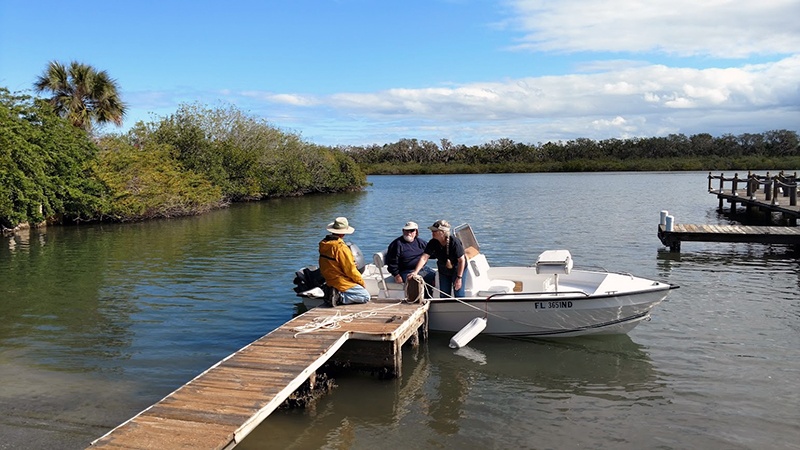 Then we set off for our ride. Can anybody hear the theme song from Gilligan’s Island about a three-hour cruise?

We went south about 5 miles, operating at minimum wake as required by law because this is a manatee zone, and the boat ran perfectly. Then we got past that and out into the clear and Curtis told me to open it up. We were zipping right along, my GPS saying we were doing a little over 28 mph, and I thought all was right with the world.

Wrong! Suddenly the engine lost power, just like it had before. Curtis opened the gas cap, in the hope that if the problem was a bad vent from the tank, that would cure it. He also pumped the primer bulb to manually feed fuel to the Yamaha outboard motor. The engine fired back up with no problem and we decided to head for home. We got about half a mile when it stopped completely. Nothing, nada, zip.


So there we sat on the Intercoastal Waterway trying to decide if our best option would be to try to paddle to shore (the Coast Guard requires powerboats in these waters to have an oar or paddle for situations just like this). But the current was against us and we weren’t making any headway at all. We dropped anchor and tried to manually prime the motor again, but there was no gas coming out of the tank.

Fortunately, boaters are wonderful people, and in just a few minutes a big trawler named Salty Paws came along. Its owners, Bill and Molly Webster, saw us waving and came alongside to ask if we needed any help. We told them that we had lost power and weren’t sure what the problem was, and they very kindly offered to tow us all the way back to our dock. What nice people! Here is a picture of Bill and Molly and their boat that I stole from their blog http://cruisingonsaltypaws.blogspot.com/ 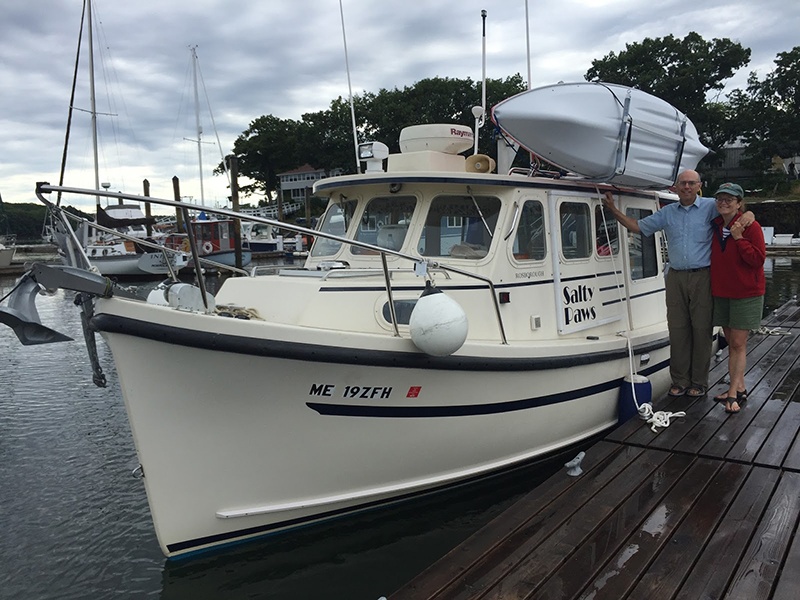 Curtis tied the line they threw us to the bow of my boat, and off we went like a herd of turtles. It was a slow trip, but at least we were moving and didn’t have to call and then wait for the boat towing service that comes with my insurance policy. Before I started looking at boats, I didn’t even know they had towing services for them. But I’m glad they do!

Once we were back at the dock and had thanked Bill and Molly profusely for rescuing us, we winched my boat back onto the trailer. Curtis said he didn’t think we had any fuel in the tank even though we had not been able to put much more than half a gallon in when we had the problem the other day.

Then I remembered something I had read on a forum about Key Largo boats. Somebody said that their tank designs made them very slow to fill. A light went on and I asked Curtis if it was possible that we were only able to pour a little gas in from the can without it backing up on us because of that, which led us to believe the tank was indeed full, as the gauge said. He agreed that that was a good possibility.

We drove to a gas station a few miles down the road which sells non-ethanol marine gas. I knew the boat had a 20 gallon tank and wanted to see just how much it would take. And I’ll tell you what, whoever said they were slow to fill did not exaggerate! It took a long time because the gas kept splashing backwards like it was full, but by just letting it run in at a very slow speed we were able to put 20.5 gallons in until it was full to the rim.

So we were out of gas both times! Apparently the first time around when we were able to get a little bit of gas in from our portable tank, it was just enough to make the engine start and run for about five minutes before it would run out of fuel again, and when we repeated the process, we again got just a little bit in to allow us to go a little further.

Thank you Curtis, Rosemary (his wife), and our buddy Jim Lewis, who both brought cans of gas down to us at the dock so we could give it to Bill and Molly to make up for what they had used towing us home, and, of course, thank you again, Bill and Molly! Your kindness is very much appreciated!

Thought For The Day – The only time you have too much fuel is when you’re on fire.