Note: This story first appeared in the July-August 2014 issue of the Gypsy Journal.

Guns are like cats. People seem to either love them or hate them. If you’re in the “love” category, or even if you just appreciate fine firearms, make it a point to visit the J.M. Davis Arms & Historical Museum in Claremore, Oklahoma; the largest private gun collection in the world. And don’t be surprised when you discover that besides guns, the museum has a whole lot more to offer!


With over 50,000 items on display, from saddles to spurs, branding irons, musical instruments, World War I posters, military weapons, John Rogers statuary, Native American artifacts and more, there is something for everyone at the museum. 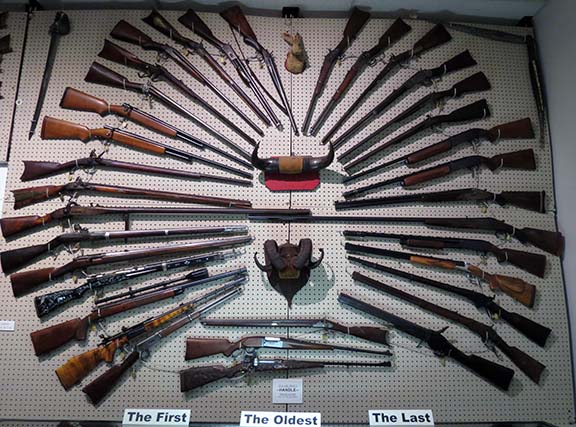 So how did this massive collection come to be, and why is it in Claremore? In 1894, when John Monroe Davis was a seven year old boy, he was very sick and didn’t like the taste of the medicine he had to take every day. As a reward for not fussing when it came time to give him his medicine, his father gave him a muzzle-loading shotgun that cost $1.50. That first gun is still in the collection, and it began a fascination with guns that continued throughout his life.

In 1916, Davis traded 2,000 acres of land in Arkansas for the Mason Hotel in Claremore. He also built many rental homes around town. Davis was always a kind-hearted man, and when money and jobs were scarce during the Great Depression, he never evicted someone who could not afford to pay their rent, knowing they didn’t have anyplace else to go. Sometimes he would take a gun or something else in trade, but more often he just shook their hand and said they all looked forward to better times.


The ground floor of the hotel contained several businesses, including Claremore’s first bank, a dress shop, real estate office, and the hotel’s coffee shop. Will Rogers and his family often ate at the coffee shop, as did pilot Wiley Post when he visited Claremore.

Davis was well known for his compassion. One story tells of a local man who came into the coffee shop and a waitress tried to turn him away, saying, “We don’t serve colored people.” Davis overhead her and told her to bring them both a cup of coffee. He then sat and visited with the man as they drank their coffee and when they were finished, Davis welcomed him back anytime and told him to bring his friends.

He continued to add to his collection one gun at a time, and the collection grew to 99 guns. But guns weren’t the only things that caught Davis’ eye. He also collected knives, swords, Native American artifacts, saddles, music boxes, musical instruments, and anything else he could get his hands on. And everything was displayed in the hotel.

Before long the lobby walls were covered, the ballroom and seven private rooms were filled, and upstairs the long hallways were lined with guns and memorabilia. Travelers on Route 66 spread the word about Davis’ amazing collection and before long a steady stream of visitors from all over the world came to see the collection, buy, sell, trade, or just to talk guns. Davis became internationally known as a firearms expert and was featured in many newspaper and magazine articles.


Several museums, including the Smithsonian, tried to purchase all or part of the collection but Davis always refused to sell. It was important to him that the collection remain intact and that it stay in Claremore. In 1965, he formed the non-profit J.M. Davis Foundation Inc., which in turn leased the collection to the State of Oklahoma at the cost of one dollar for 99 years, with the option to renew. Part of the deal was that the State would build and maintain a modern facility to house the collection, and that the collection would be open to the public at no charge. Today the J.M. Davis Arms & Historical Museum has 40,000 square feet of floor space, and the gun displays alone total over one mile in length. 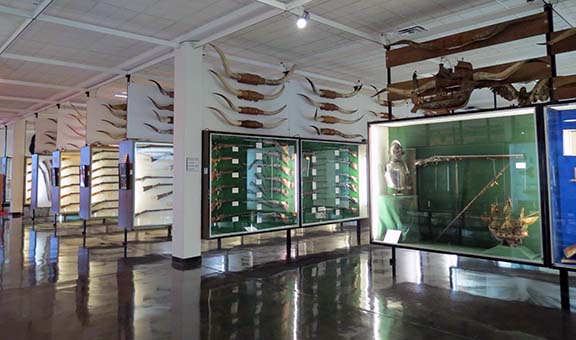 The collection includes over 13,000 firearms, from a fourteenth century Chinese hand canon to a Gatling gun, modern machineguns, and both antique and modern handguns; a walk-through collection of firearms history. 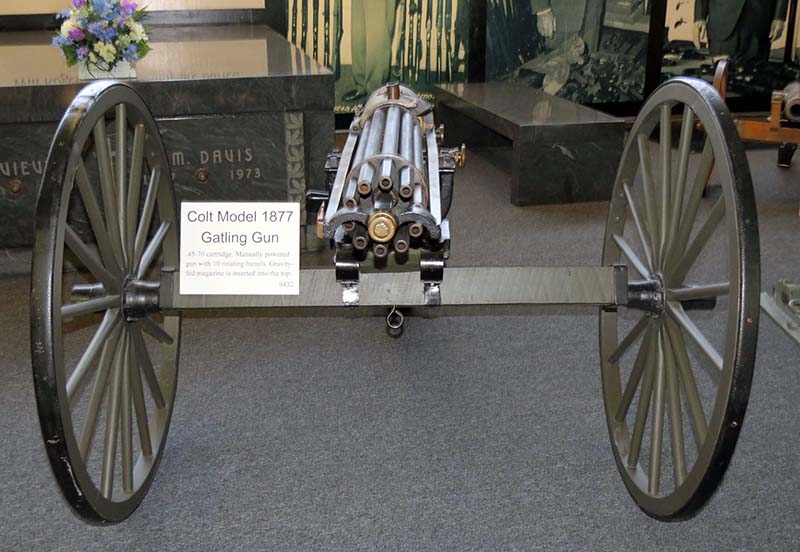 One large display is devoted to guns carried by outlaws and gangsters, including such infamous felons as Charles “Pretty Boy” Floyd, Bonnie and Clyde, and the Younger gang, along with lesser-known criminals. 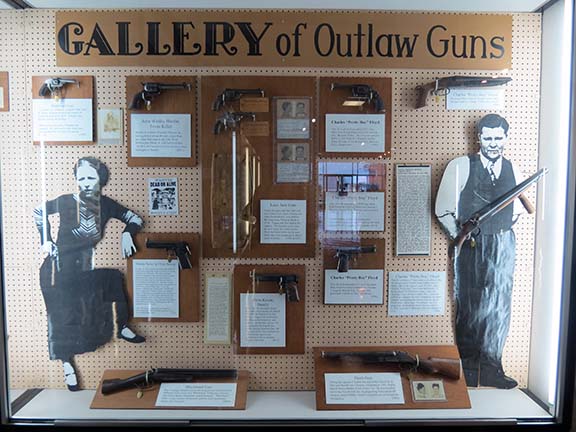 Proving that crime doesn’t pay, the museum also has a macabre display of nooses used to execute convicted criminals. Another part of the outlaw gallery is a collection of shackles, leg irons, ball-and-chains, strait-jackets, and other assorted “attitude adjustment” devices from the early decades of the 20th century.

Scattered throughout the exhibits you will also find many swords, knives, and other unique edged tools and weapons.

Among the many interesting things on display was a collection of canes, a case full of antique violins, another filled with banjos, political buttons, and over 1,000 German beer steins. 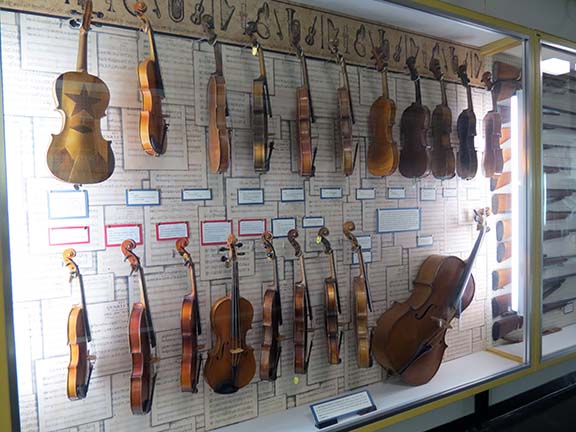 Davis always said he wanted to be buried with his gun collection. In January, 1973, he fell on the hotel stairs and suffered a concussion. He developed pneumonia and passed away on February 7th at age 85. He and his second wife, Genevieve, are entombed at the museum. Yes, J.M. Davis and his guns are still together.

Whether you appreciate fine firearms, are a history buff, or enjoy learning more about a hundred different things, a visit to the J.M. Davis Arms & Historical Museum is always interesting and well worth your time.

Thought For The Day – Some dreams were never meant to be

One Response to “Choose Your Weapon!”