Nick's Blog » Not A Safe Place

What has happened to the world? Have we all become a population of total wimps? Every day I end my blog with a thought for the day. Yesterday’s was “You can tell a lot about a woman from her hands. For instance, if they are wrapped tightly around your throat, she’s probably upset about something.” I received a long e-mail from a woman saying that the comment really upset her and that she reads my blog for enjoyment and to learn about RVing because she plans to become a solo fulltimer soon, but she won’t anymore because it no longer feels like a “safe place” for her.


Really? I wanted to tell her the world isn’t a safe place and if she feels that threatened by mere words, she needs to crawl back into bed and stay there with her head under the covers. It’s a good thing she never reads any of my mystery novels. People get killed in them!

If she’s that sensitive, I don’t think she’s going to have much fun as a fulltime RVer traveling the country alone. There are all kinds of people out here on the road and in the towns and cities we all pass through. The greatest majority of them are very nice, an occasional few are jerks, and some are downright evil. But there are not very many people who are going to spend their days watching everything they say and do so they don’t offend somebody.

Another woman wrote about the same thought for the day that more men abuse women than the other way around, but apparently I’m okay with that. No, I don’t approve of anybody abusing anyone. That’s why I was a founder of and on the board of directors of our town’s women’s shelter before we hit the road as fulltime RVers. Doesn’t anybody understand humor anymore?


Seriously folks, I learned a long time ago that a sense of humor will get you through damn near anything. And at the same time, if you wake up every morning looking for something to be upset about, you won’t have to work too hard to find it. Life is too short for that kind of nonsense.

I’m reminded of an incident several years ago when someone told me that they wanted to subscribe to the Gypsy Journal, but he had a real concern about something and wanted to find out ahead of time. He wrote that I refer to Terry quite frequently as Miss Terry, and wanted to know if we were married. He said that he is a born-again Christian, and that spending his money with somebody who was living in sin would offend him and God. I replied that yes, we’ve been married a long time, and that I refer to her as Miss Terry as a term of respect and affection. But I also added that he should keep his money and not subscribe to the paper, because there was no question about it, sooner or later I was going to do or say something that would offend him!

I think this Facebook meme about sums it up. 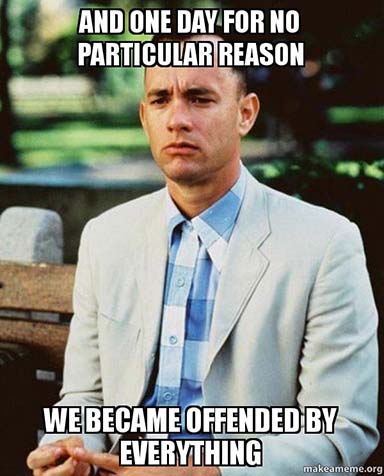 Today is a big event for us, we are having our first visitor to our new home! My friend Jim Lewis is coming over from Mission, Texas to spend some time with us. Jim and I go back about 30 years, and we are as close as brothers and even have the same warped sense of humor. Terry and I are really looking forward to seeing him.


If you are doing your Christmas shopping online, please consider clicking this Amazon link or the Amazon Search box at the top right sidebar of this blog. When you purchase an item on Amazon from our link we earn a small commission, which helps us offset the cost of publishing the blog.

Thought For The Day – Turns out I have the same reaction to idiots as dogs do to vacuum cleaners.

24 Responses to “Not A Safe Place”