Nick's Blog » A Drive On The Wild Side

One of our favorite things to do here is to take a slow drive through the Merritt Island National Wildlife Refuge seeing how many different animals we can spot, which can range from 50 or more varieties of birds to deer, raccoons and armadillos, and even bobcats and alligators. So yesterday we decided to take Jim down there and give him a tour of the place.


The wildlife refuge is part of the Canaveral National Seashore and there is an entry fee of five dollars per car, which is waived if you have one of the National Park Passes. I got a Senior Pass a couple of years ago when I turned 62, but I seem to have lost it. And that’s very strange, because I never lose things like that. Drivers license, credit cards, park passes, membership cards, etc. all go into my wallet the minute I get them, and whenever I pull them out to use them I put them back in the same slot. But somehow my Parks pass went missing. It was no big deal, since both Jim and Miss Terry have one, but I wanted to replace it anyway, since I knew that the prices are going up soon from $10 for a lifetime pass to $80, as I wrote about in a recent blog post. So we stopped at the ranger booth, I got another one, and immediately put it in my wallet.

We first drove out to Playalinda Beach and stopped at one of the parking areas so we could walk across the boardwalk and see the beach. Actually, there wasn’t much beach to see. It was a windy, chilly day and the tide was high. The ocean was angry, big waves crashing into the beach. We were all wearing short sleeve shirts and it didn’t take us long to see what we needed to see and head back to the warmth of the pickup.


Biolab Road, one of our favorite roads to drive through the refuge on, was closed due to damage from Hurricane Matthew. So instead, we drove to the manatee viewing platform on Haulover Canal. 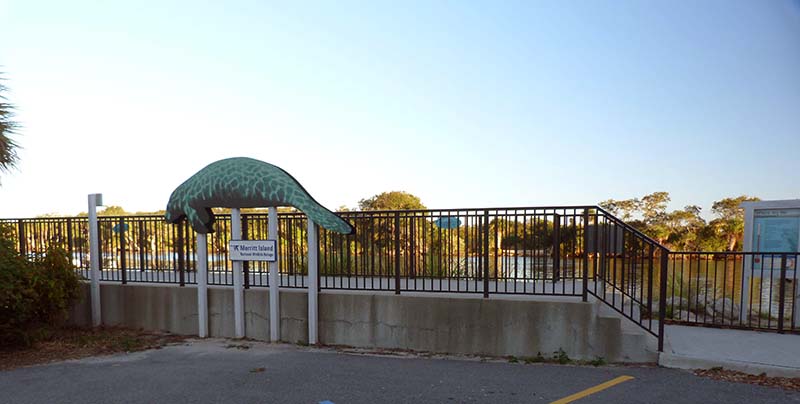 Jim had never seen a manatee in the wild before, and we were hoping to spot one. And sure enough, we had only been there a few minutes when Miss Terry saw the distinctive bubble on the water that indicated a manatee coming to the surface for a breath of air. 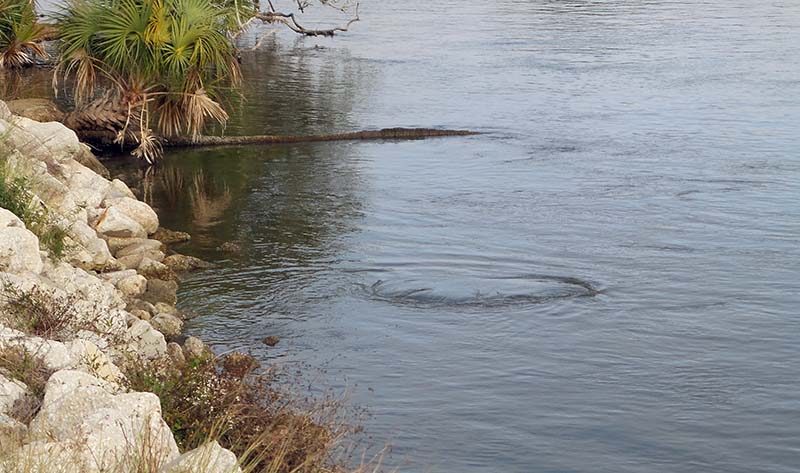 They don’t stay up long and they’re hard to photograph, but I did get a picture of its tail as it went back under. 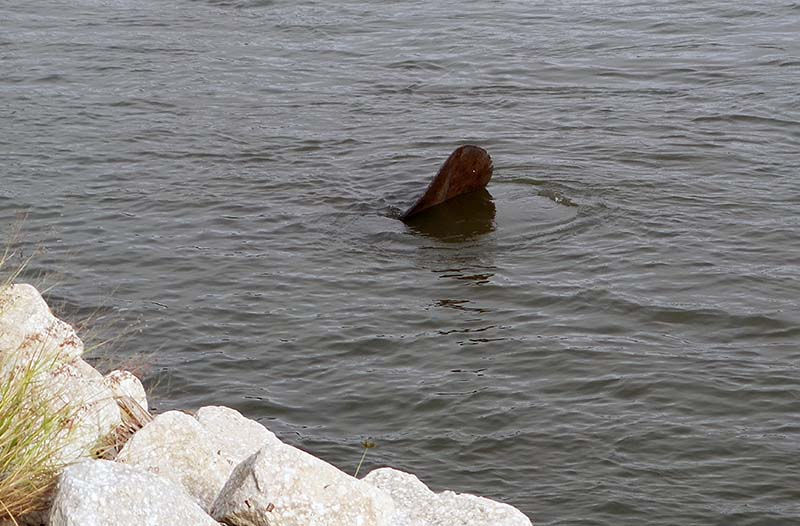 We saw a couple more snouts poking up now and then but that was it so we went to Blackpoint Wildlife Drive, a well-maintained dirt road that makes a seven mile loop through the refuge. There are many pullouts with interpretive signs where you can stop and check out the wildlife as you make your way slowly around the loop. 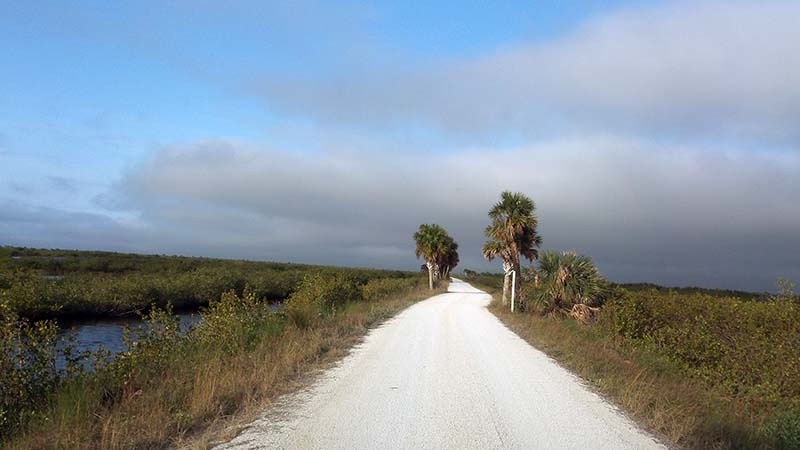 Several vehicles were on the road, including one Class C motorhome. 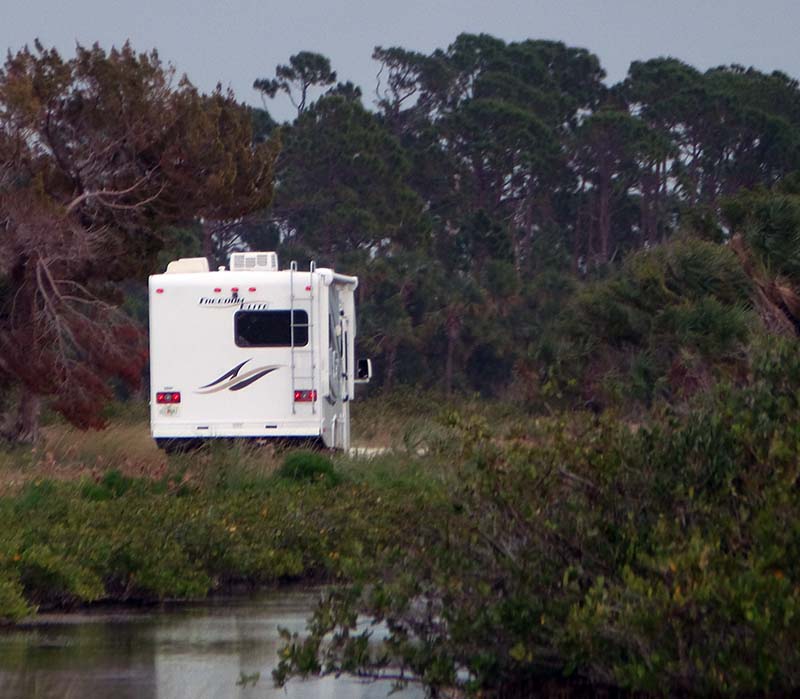 There were birds everywhere, including great flocks of coots.

We also saw a lot of egrets. 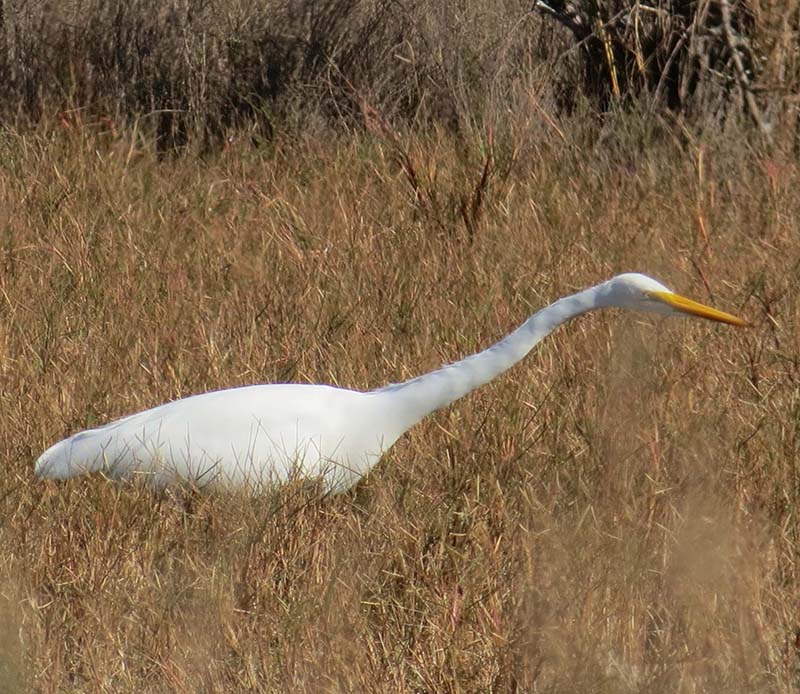 Miss Terry spotted a bald eagle, but before I could get my camera into play it had flown off and all I got was a blurry image.


I did manage to get a couple of pictures of this heron. Unfortunately, I missed the best picture of it, when I started to drive away and it flew along beside the truck right at cab level. Again, by the time I could get the camera up, it had crossed in front of us and was gone. 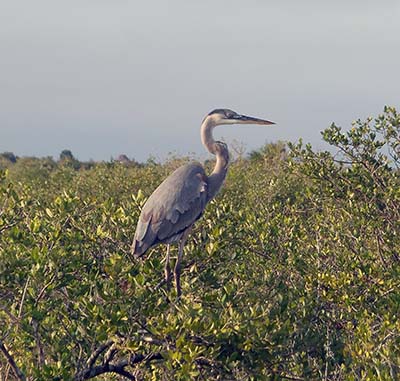 This is a roseate spoonbill, one of Miss Terry’s favorite birds.

It gets its name from its uniquely shaped bill, and of course its rosy pink color. There are lots of them in the refuge. 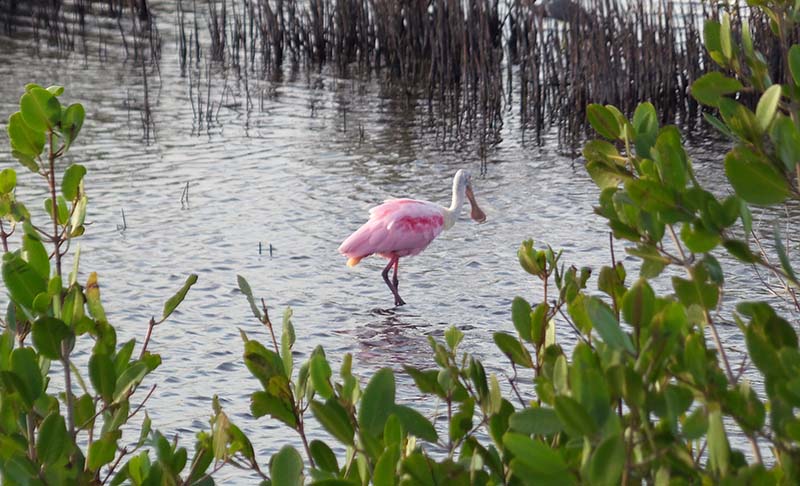 What we really wanted to show Jim was an alligator, since he had never seen one of those in the wild, either. It looked like we were going to get skunked, because while we saw lots of tracks in the mud on the edges of the ponds from their claws and tails, we were almost all the way through the refuge and had not seen one yet.

But then Terry’s sharp eyes saved the day and she saw the knobby eyes of one sticking out of the water. We stopped the truck, and immediately she saw another swimming along slowly.

Like manatees, when gators are in the water you don’t really see a lot of them, and these two didn’t seem all that large, as alligators go. But then we saw the big one! In fact, he was so big that we couldn’t see the front part of him, but there was enough to know that he was a whopper of a gator. I suggested to Jimmy that he might jump into the water and splash around and see if he could get it to come out so I could take a better photograph, but he wasn’t real wild about that idea. Go figure. 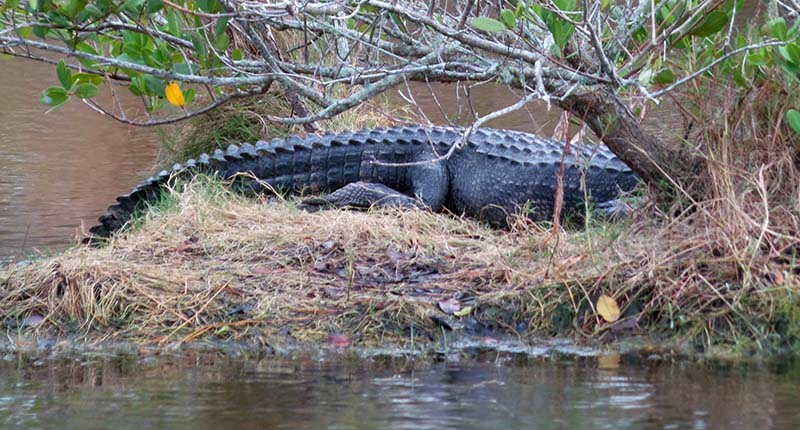 When we left the refuge we went to Lowe’s to purchase a screen door for our house, then we stopped for dinner at El Leconcito, one of our favorite restaurants in this part of the country. They serve excellent Mexican and Cuban food, and we had been bragging to Jim about how good the place was. The portions are huge, the service is always friendly, and the prices are very reasonable. We all ate until we could hardly move, and I believe Jim was duly impressed.

By the time we left the restaurant it was getting dark. But before we headed home, we had one more stop to make. For as long as back when we started coming to Florida, people were always telling me how great the shrimping was at the Titusville pier and I wanted to see for myself.

Though it was a cold, windy night, there were a lot of folks out with their dip nets, and the action seemed to be pretty good. 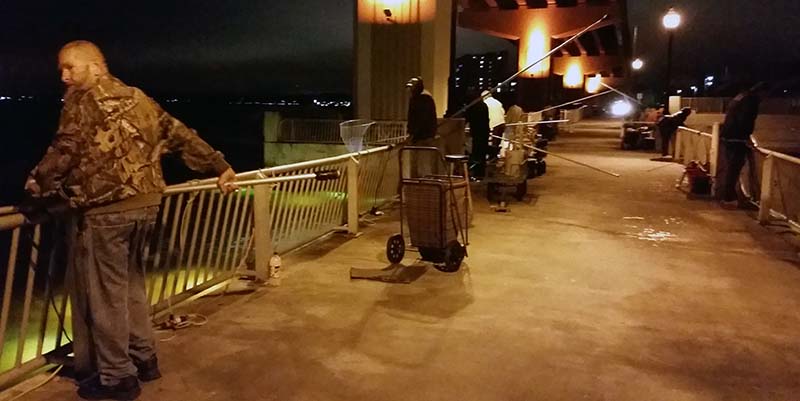 These guys are a lot bigger than the shrimp we’ve been getting at our little pier here in Edgewater. We watched the techniques of a couple of the experienced shrimpers, noted how their submersible LED lights really help them see the shrimp in the water, and came away with some new ideas for the next time we take our dip nets out.

Back at home we watched a little bit of television but I think the long day and the good food wore Jim out, because by 9:30 he was falling asleep in his chair. He woke up long enough to say goodnight, then headed for bed.

If you are doing any last minute Christmas shopping online, please consider clicking this Amazon link or the Amazon Search box at the top right sidebar of this blog. When you purchase an item on Amazon from our link we earn a small commission, which helps us offset the cost of publishing the blog.

Thought For The Day – Why is Christmas just like a day at the office? You do all the work and the fat guy in the suit gets all the credit.

7 Responses to “A Drive On The Wild Side”