Nick's Blog » Up Early And On The Go

Yesterday was a busy day that started way too early for us. Terry was up at 7:30, while I slept in an extra hour, and we were out the door by 9 o’clock. Our first stop was the small flea market in Oak Hill, just a few miles south of us. The neighbor who loaned us the long handled dip nets that we used to catch shrimp a few days ago said there was a vendor at the flea market who sells the nets and other shrimping equipment and we wanted to check it out.


As it turned out, the vendor wasn’t there. There probably weren’t more than a dozen or maybe fifteen vendors total. But Terry did find some fresh produce and purchased it, and we were told that the person selling the shrimping equipment will be there today. So I guess will be up early again, two days in a row. When will the madness ever stop?

I have wanted a pontoon boat for a long time, and I still do. But a lot of people who know the local waters of the Indian River and Mosquito Lagoon tell me that it might not be the best choice for us. There is a lot of what they call skinny water here, which means shallow water, and several people have said that a flats boat or shallow draft bay boat would be a better option for fishing. I had found one that sounded good on Craigslist in Daytona Beach. The seller said it was in great shape, needed absolutely nothing, and was ready to go fishing. And after running it by my pal Al Hesselbart and getting the thumbs up, we decided to have a look.


But as it turned out, it was a piece of junk. There were cracks in the fiberglass on the deck in front of the console, the upholstery was badly worn, pieces of the plastic sides of the seat mount and center console were broken or missing, the battery compartment hatch hinges were broken, none of the gauges worked, and there were no navigation lights. We walked away while the seller was still telling us what a great deal it was. Oh well, when the right boat comes along, at the right price, we’ll know it.

Since we were already in Daytona Beach, we visited a couple of used furniture stores, looking for more oak bookcases (you can never have too many bookcases or too many books). At one store we found three nice ones and I was able to negotiate a heck of a price on them. Terry was also looking for a drop leaf table to use in her sewing room, but no luck there.

We stopped to get a bite to eat, then went to Staples and bought a desk chair for Terry to replace the worn out, uncomfortable task chair she has been using. Then we went to Books A Million, because like I said, you can never have too many books.


On the way home we remembered it was auction night in Oak Hill, and they were supposed to have a bunch of furniture from an estate. But as it turned out, I got some misinformation and it will be another week or two before that stuff goes on sale.

While we were wandering through the auction hall I heard someone call my name, but since we don’t know very many people around here, I assumed whoever it was meant another Nick. But as we were leaving, I heard my name called again and turned to see a gentleman approaching us with a book in his hand (do you see a theme with today’s blog?). He introduced himself as long time reader Mr Ed, who frequently makes comments on the blog. He lives south of here and said, “I know you like books, so here you go.” It was a large book called Waterways and Byways of the Indian River Lagoon. It’s full of color photos of the local wildlife and fish, as well as satellite photographs of the entire region. How cool is that? Thanks, Mr. Ed. I love it!

Unfortunately, we didn’t get to talk for very long, because Mr. Ed reminded us that in less than 45 minutes NASA was due to launch a rocket from the Kennedy Space Center. The rocket was carrying a GOES (which stands for Geostationary Operational Environmental Satellite) satellite into orbit, which will be used for weather forecasting. We really wanted to see that, so we hurried back home and out to the dock on the Indian River. We got there at 5:30 PM, and the launch was scheduled for 5:42. Just in time!

But as frequently happens, there was a delay and it was another hour before the rocket lifted off. We spent the time chatting with some of the other folks who were down on the dock to see the show, and watching some manatee and a pod of dolphins swimming around. We also spent quite a bit of time swatting mosquitoes, who didn’t seem to have any problem digging their way through the bug spray we had doused ourselves with. I was kind of ticked off about that because I figure if there are parts of my round body that I can’t reach, it’s not fair that a skeeter can. But they sure found them! 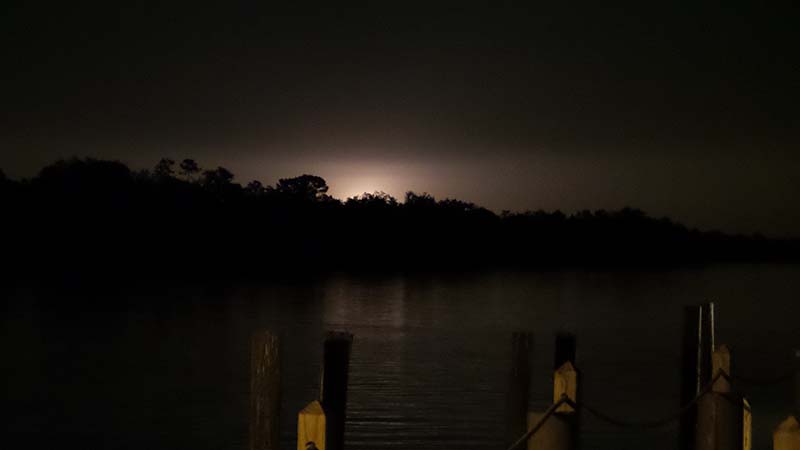 For a couple of seconds it looked like a very bright moonrise, but that didn’t last long. 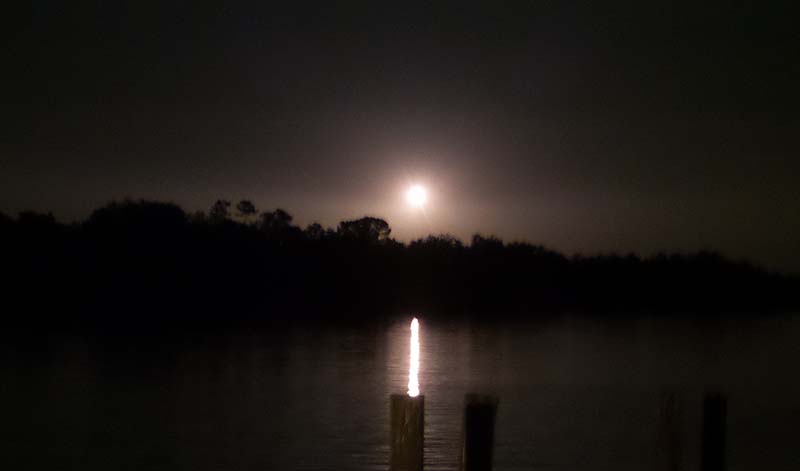 The rocket became a giant fireball hurtling into space, and though I managed to get a few photographs, most of them were blurry. This was about the best I got. And then it was just a tiny speck, disappearing into the darkness of outer space. 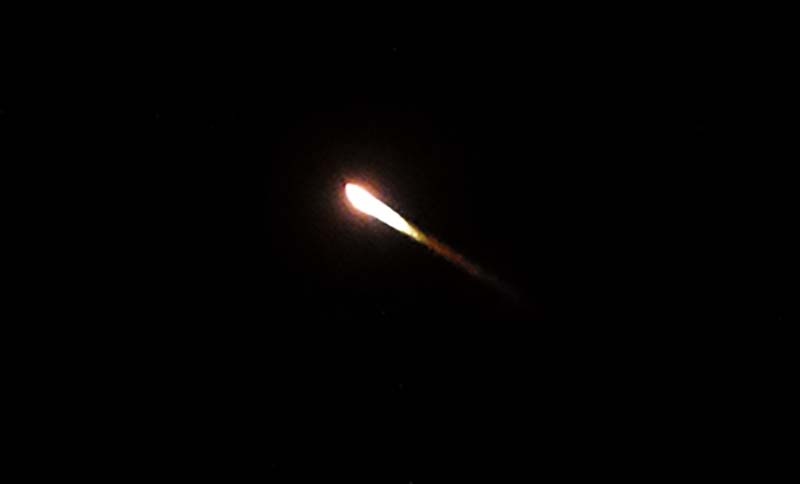 If you ever have the opportunity to see a live rocket launch, you really need to take it. It’s an awesome experience.

Today is your last day to enter our latest Free Drawing. This week’s prize is a set of three books by Master Certified RV service technician Dale Lee Sumner that are excellent introductions to RV 12 volt electrical systems, 120 volt RV electrical systems, and RV appliances. While these books won’t make you a qualified RV tech, they will show you the basics of how your rig’s systems operate, how to get the most out of them, and give you some basic maintenance tips. To enter, all you have to do is click on this Free Drawing link or the tab at the top of this page and enter your name in the comments section at the bottom of that page (not this one). Only one entry per person per drawing please, and you must enter with your real name. To prevent spam or multiple entries, the names of cartoon or movie characters are not allowed. The winner will be drawn this evening.

Thought For The Day – Sometimes those who fly solo have the strongest wings.

7 Responses to “Up Early And On The Go”