One of the things I’ve enjoyed at our site here at Elkhart Campground is that we are right next to the dog park, which means I get to meet a lot of friendly critters and get my puppy fix on a regular basis.


Dogs and cats make fine pets for RVers, and we have known many of them in our years on the road as fulltimers. But those aren’t the only animals RVers travel with. Oh no, not at all!

In our travels we have met people who share their homes on wheels with all kinds of unique pets. At a campground in Texas we once met a couple who fulltime with two Amazon parrots. Since then we’ve met several others who travel with the colorful birds.


This is Jonathan, who our friend Nancy Kissack raised from an egg. Jonathan is really a girl, and we get along very well. 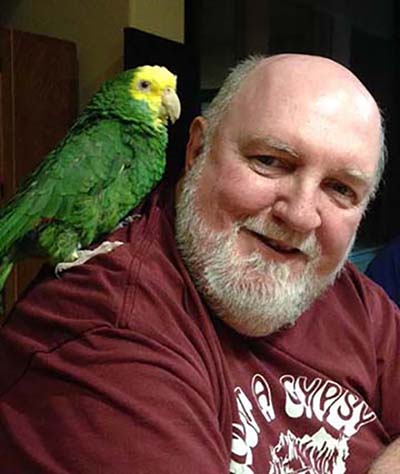 Besides Jonathan, Nancy also travels with two dogs, but they are the little wannabe varieties, not real dogs. Anything smaller than a Springer Spaniel does not qualify as a real dog. It’s true, look it up. I’m sure I read that somewhere.

Twice now we have met RVers who have monkeys, one of which French kissed me. It’s a long story and I don’t really want to talk about it. Let’s just say that that was the week I went through two tubes of toothpaste and three bottles of Scope mouthwash.

When we were teaching at Life on Wheels years ago, somebody came to the conference in Bowling Green, Kentucky with a young kangaroo that went with him everywhere in its own fabric pouch that he wore like an apron. It was a hit with everybody!

A couple of years ago when we were at the Indian Lakes Thousand Trails preserve in southern Indiana, somebody had a potbelly pig as a pet. They had a little portable fence they put out under their motorhome’s awning and he hung out there, getting a lot of attention from everybody who walked by.

We have also heard of RVers who travel with ferrets, chinchillas,  and even a snake or two. I try to avoid anybody who considers a snake a pet.

Once, when we were staying at Fisherman’s Landing, a city-owned campground and marina in Muskegon, Michigan, Jay and Gwen McMichael were parked a few sites down from us. I wandered down to chat with them one morning and they introduced me to Randy, their African Leopard Tortoise. 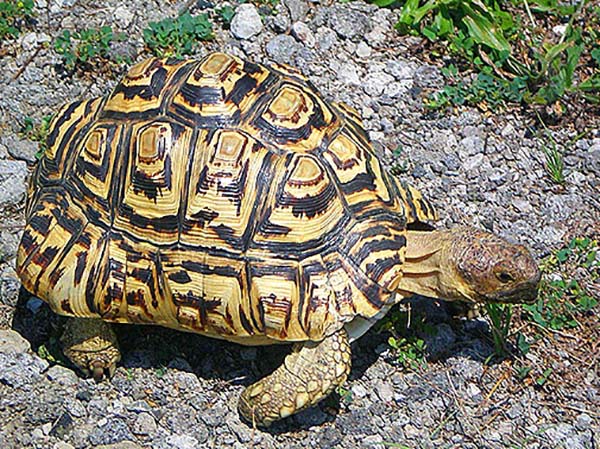 He was busy munching on grass under a picnic table, and when Gwen picked him up to show him to me, I swear the critter actually had a personality! Instead of withdrawing into his shell like most turtles I have ever seen, Randy was happy to have his head rubbed. 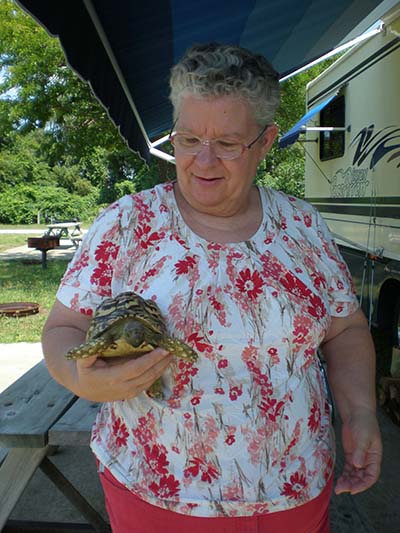 Jay said he got Randy when he wasn’t much more than a hatchling, and that he made a great pet, because he didn’t bark, shed, or claw the furniture, and was very low maintenance overall.

I guess if you’re going to travel with your house, having a pet that travels with his own house, too, kind of makes sense, doesn’t it?

What are some of the strange pets you have seen in RV parks?